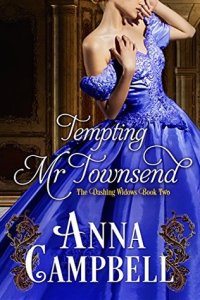 Beauty – and the Beast?

When rough diamond Anthony Townsend, who also happens to be one of the richest men in England, bursts into Lady Fenella’s house and demands she hand over his runaway nephew, this dashing widow embarks on a breathtaking adventure that might just end in exciting new love.

Fenella, Lady Deerham, has rejoined society after five years of mourning her beloved husband’s death at Waterloo. Now she’s fêted as a diamond of the first water and London’s perfect lady. But beneath her exquisite exterior, this delicate blond beauty conceals depths of courage and passion nobody has ever suspected. When her son and his school friend go missing, she vows to find them whatever it takes. Including setting off alone in the middle of the night with high-handed bear of a man, Anthony Townsend. Will this tumultuous journey end in more tragedy? Or will the impetuous quest astonish this dashing widow with a breathtaking new love, and life with the last man she ever imagined?

When Anthony Townsend bursts into Lady Deerham’s fashionable Mayfair mansion demanding the return of his orphaned nephew, the lovely widow’s beauty and spirit turn his world upside down. But surely such a refined and aristocratic creature will scorn a rough, self-made man’s courtship, even if that man is now one of the richest magnates in England. Especially after he’s made such a woeful first impression by barging into her house and accusing her of conniving with the runaways. But when Fenella insists on sharing the desperate search for the boys, fate offers Anthony a chance to play the hero and change her mind about him. Will reluctant proximity convince Fenella that perhaps Mr. Townsend isn’t so beastly after all? Or now that their charges are safe, will Anthony and Fenella remain forever opposites fighting their attraction?

Lady Fenella Deerham is enjoying a quiet evening at home, when a very large man rushes in past her servants, and demands that she allow him to see his ward.  The man, Anthony Townsend, is uncle to Fenella’s son’s best friend, and has learned that both boys have left school together.  He incorrectly assumes both boys would be here, but he finds that Fenella has not yet even received word that the boys ran off.  Almost immediately, a messenger arrives with letters from the school, and Anthony is sure he now knows where the boys have headed – to his home to visit his old nurse who has taken very ill.  As Anthony prepares to travel there, Fenella insists on accompanying him.  Anthony adamantly refuses, until Fenella convinces him that she will only follow in her own carriage if they don’t travel together.

Fenella has been widowed five years, and has only recently rejoined society at the insistence of her friends, who call themselves the dashing widows.  Her marriage was very happy and loving, so she has made up her mind to live quietly, and devote herself to her son and her memories.  She is somewhat surprised to find herself enjoying the close proximity to Anthony on their journey.  His larger than life presence and masculinity have woken the physical desires that Fenella thought she buried with her husband.

Anthony is a very wealthy, successful man, although not a member of the ton.  He was named guardian to his nephew when his brother and sister-in-law were killed in a boating accident, and is fumbling to handle his nephew and his grief.  When the boy disappeared from school, Anthony panicked, and acted very out of character with Fenella.  Once they are actually on the road, Fenella can see that he is really a caring and kind man, which only adds to her admiration of him.  Anthony is finding that he is very intrigued by Fenella, as well.  She is nothing like he imagined society ladies to be.

Much to their relief, they find the boys have made it safely to Anthony’s home, and though they have only known each other for two days, they indulge their curiosity and share some steamy kisses.  When it’s time for Fenella to return home, Anthony knows that he wants her to be a part of his life  His intentions are honorable, but Fenella begins to feel guilt and disloyalty to her deceased husband.  Can she overcome those feelings, as well as her fear of losing a loved one again if she takes a chance?  I had a lot of admiration for Fenella, as she talked out all her feelings with Anthony.  There was no great misunderstanding, as she told him all her reasons and her logic.  I also liked Anthony very much.  He knows that he comes from a different world, but his feelings are strong enough for him to fight for what he wants.  He’s willing to give Fenella the space she needs, but he’s determined not to give up.  TEMPTING MR. TOWNSEND  is a lovely, passionate short story with winning characters you can’t help but root for, and is a delightful addition to the Dashing Widows series, which I’m happy to recommend.