Olivia Townsend is in trouble and
out of options. Pursued by a desperate man in search of a lost treasure, which
she doesn’t have, she’s got only two things in her favor: her late husband’s
diary, which she was never meant to see… and the man who was her first-and
only-love. Losing him broke her heart, though she’s been careful to hide it for
the last ten years. But when he comes to her aid and vows to stand by her this
time, no matter what, she can’t help but hope things will be different this
time.James Weston has blamed himself for letting Olivia down when she needed him
years ago, and he will not do it again. Fortunately, his unusual life has
equipped him well to outsmart the villain chasing Olivia. Unfortunately, being
so near her again threatens to expose every secret in his heart…even those that
should stay hidden forever.

James pulled off his boots, and then his stockings, and then—to Olivia’s shock—he climbed up and stood on the highest rock, letting the water foam over his feet and wet his breeches. “Don’t you want to climb up?”

She looked longingly at the rocks. The thought of water running over her feet and ankles was tempting, but not worth it. “I’d get wet, and my mother would be displeased.”

Slowly she looked down at her shoes and stockings. Maybe if she held up her skirts, very high . . . But that would also be improper. “I’d better not.”

“Oh,” he said in disappointment. “You’re a coward.”

He shrugged, kicking at the water and sending a spray over the grass. “I can tell you want to get up here but you won’t.”

“So walk around until your feet and skirt dry. That’s what my sisters do.”

Olivia stole another look at the frothing stream. “Your sisters climb up there?”

“And they’re even younger than you. But if you’re too scared . . .” He started to climb down.

Her mouth firmed. She was not scared. “Those rocks are slippery. I don’t want to fall.”

He grinned as if he knew he’d won. “I’ll hold your hand.”

And he did. Olivia peeled off her stockings and slippers, folded up her skirts as high as she dared—all the way above her knees—and carefully stepped into the water. She gasped at the cold initially, but it was a hot day and soon the water felt blissful. James held her hand as promised and coaxed her to stand on the topmost rock at the edge of the waterfall. She balanced on the wide flat stone and a grin spread across her face. The water rushed over her toes and ankles and she thought she’d never done anything this daring in her whole life. “How did I never discover this?”

“So I’m a bad girl for coming out here?”

That allayed Olivia’s moment of worry. Curious didn’t sound so terrible. She exchanged a tentative smile with James.

When their feet had gone numb, he helped her climb down and back onto the grass.

“Do you play dolls still?” he asked as he put his boots back on.

Olivia shook out her skirts, relieved to see that she had kept dry except for a small spot on one side. “Sometimes.”

He turned at her indignant cry. “Call me Jamie. James if you must. You might as well come meet my sisters, who drove me from the house today with begging me to play dolls. My mother said I had to entertain them but they don’t like the way I play dolls.” He made an aggrieved expression. “Why can’t a doll put on a fine dress and then have a sword fight with another doll? What else have dolls got to do all day?” He shrugged. “You probably know better how to do it the way they want.”

“I can’t go into town without permission,” Olivia finally said. Privately she was curious to meet the Westons. Her parents didn’t view most of the local families as their equal, and Olivia and Daphne weren’t allowed much contact with other children. And even though she didn’t spend as much time with dolls as Daphne did, she wasn’t immune to wanting to see the Weston girls’ dolls, which were sure to be much finer than anything at Kellan Hall. But if Mother saw her, she’d be in such trouble.

He grinned as if sensing another victory. “We don’t live in town anymore. We took possession of Haverstock House this week, right over the hill.”

Her eyes popped open. Haverstock House was the finest house in the county, and lay between Kellan Hall and town. It belonged to the elderly Earl of Malke, who rarely visited since his wife’s death. Now the Westons owned it?

“I expect my mother will call on your mother soon, now we’re neighbors,” he went on. “Will she let you come visit then?”

Jamie Weston flashed his confident grin once more. “I’ll wager a copper penny she will.”

Olivia Herbert first set eyes on James (Jamie) Weston in church when they were children, and he caught her attention and coaxed a laugh out of her.  Though Olivia’s awful parents felt they were far above the Weston family socially, they allowed a friendship  to develop because the Westons were extremely wealthy.  Jamie and Olivia (Livie)became best friends over the years, and when Livie was seventeen, she and Jamie declared their love for each other.  Jamie proposed, Livie accepted, and they decided to marry in a year when Jamie was more settled in a career.  Shortly after, Jamie left to go on a business trip. telling Livie about it in a note.  Livie’s parents were quite anxious to get their hands on some Weston money, and were not happy to find that Jamie left.  They were even more unhappy to find that the couple planned to wait a year to marry.  In desperation, Livie’s father hastily arranges a marriage for Livie to another man, and he refuses to back down, despite Livie’s pleas.  Livie sends Jamie letters, but  by the time he returns, he’s a few days too late, and she is already married.  They have a heartbreaking meeting, and Livie is adamant that they can now only be friends.

In the intervening years, Livie has maintained her friendship with Jamie’s sisters, Abigail and Penelope.  They pass along gossip about Jamie, sometimes mentioning a current lover, though he’s never married.  Livie’s own marriage has never developed into more than the convenience it was meant to be.  She is not mistreated, but she’s not loved or cherished either.  Henry, Livie’s husband, suddenly takes ill and does not recover.  After his death, his close friend,  Clary, begins to pursue Livie.  He not only wants her to have an affair with him, he insists that she is in possession of an object that Henry had , that Clary now wants very badly.  Livie has no clue about what this object is, and she has no desire to pursue any relationship with Clary.  It also seems that she has not been provided for by Henry, and is in difficult financial straits.  When Clary’s pursuit becomes stalker-ish, Livie sends a message to Jamie, asking for his help, and takes off to try to get away from Clary.

Jamie drops everything to come to Livie’s aid, determined that he will not fail her again.  He tracks her down, and she tells him the story of what has been happening to her.  They begin to investigate, while trying to stay out of sight of the dangerous Clary and his henchmen.  The journey leads to many discoveries, some of them involving the treachery of her husband and Clary.  Most importantly, Jamie and Livie have never stopped loving each other, and each hopes that once this mystery is solved, they will have a chance at happiness that has been denied to them for ten years.  Their interactions are beautiful, neither treats the other cruelly or bitterly, despite the sadness they’ve had to endure.  They treat each other with respect, and soon the wonderful closeness they shared as children starts to come back to their adult selves.  Jamie is a definite hero, ready to do anything he has to in order to keep Livie safe.

I fell in love with both Jamie and Livie, they are such wonderful characters, and they belonged together.  My heart broke along with theirs when they were parted.  Second chance at love is a favorite trope of mine, and SIX DEGREES OF SCANDAL delivered.  This amazing book was emotional, passionate, heartbreaking, satisfying, and even humorous, as we finally learned the identity of the mysterious Constance, the author of 50 Ways to Sin.  Caroline Linden wrapped up this series perfectly, and I happily give SIX DEGREES OF SCANDAL my highest recommendation 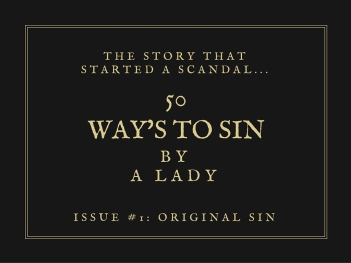 Enter to Win a Print Bundle of the Scandalous Series Books 1-3,
Includes LOVE AND OTHER SCANDALS, IT TAKES A SCANDAL
and LOVE IN THE TIME OF SCANDAL:

Caroline Linden was born a reader, not a writer.
She earned a math degree from Harvard University and wrote computer software
before turning to writing fiction. Ten years, twelve books, three Red Sox
championships, and one dog later, she has never been happier with her decision.
Her books have won the NEC Reader’s Choice Beanpot Award, the Daphne du Maurier
Award, and RWA’s RITA Award. Since she never won any prizes in math, she takes
this as a sign that her decision was also a smart one. Visit her online
at www.carolinelinden.com.