‘Til Death Do Us Part by Amanda Quick – Review and Excerpt 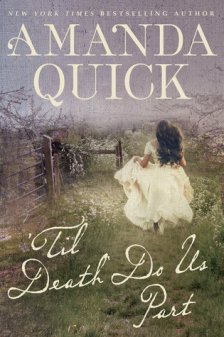 Calista Langley operates an exclusive “introduction” agency in Victorian London, catering to respectable ladies and gentlemen who find themselves alone in the world. But now, a dangerously obsessed individual has begun sending her trinkets and gifts suitable only for those in deepest mourning—a black mirror, a funeral wreath, a ring set with black jet stone. Each is engraved with her initials.

Desperate for help and fearing that the police will be of no assistance, Calista turns to Trent Hastings, a reclusive author of popular crime novels. Believing that Calista may be taking advantage of his lonely sister, who has become one of her clients, Trent doesn’t trust her. Scarred by his past, he’s learned to keep his emotions at bay, even as an instant attraction threatens his resolve.

But as Trent and Calista comb through files of rejected clients in hopes of identifying her tormentor, it becomes clear that the danger may be coming from Calista’s own secret past—and that only her death will satisfy the stalker..

She belonged to him.

He was locked inside a cage the size and shape of a coffin. A dark thrill heated his blood like a powerful, intoxicating drug.

When the time came he would purify the woman and cleanse himself with her blood. But tonight was not the time. The ritual had to be followed correctly. The woman must be made to comprehend and acknowledge the great wrong that she had done. There was no finer instructor than fear.

He huddled inside the concealed lift, listening to the sounds of someone moving about in the bedroom on the other side of the wall. There was a narrow crack in the paneling. Excitement sparked through him when he caught a glimpse of the woman. She was at her dressing table, adjusting the pins in her dark brown hair. It was as if she knew he was watching and was deliberately taunting him.

She was passable in appearance, but he had seen her on the street and had not been particularly impressed with her looks. She was overly tall for a woman and her forceful character was etched on her face. She was dangerous. It was all there in her unnerving eyes.

The woman rose from the dressing table chair and moved out of sight. A moment later he heard the muffled sound of the bedroom door opening and closing.

He slid the cage door aside and opened the wooden panel. The wall sconce had been turned down low but he could make out the bed, the dressing table, and the wardrobe.

He moved out of the lift. The heady exhilaration he always experienced at such moments roared through him. With every step of the ritual he came closer to achieving his own purification.

For a precious few seconds he debated where to leave his gift. The bed or the dressing table?

The bed, he decided. So much more intimate.

He made his way out through the tradesmen’s entrance and slipped, unseen, into the gardens. The gate was still unlocked, just as he had left it.

A few minutes later he was lost in the fog. The weight of the knife in its sheath beneath his greatcoat was reassuring.

The ritual was almost complete.

The woman with the unnerving eyes would soon understand that she belonged to him. It was her destiny to be the one to cleanse him. He was certain of it. The connection between them was a bond that could be shattered only by death.

Trent Hastings is a successful and well-to-do author.  When his sister begins to attend “salons” where she meets single gentlemen, with the intention of forming friendships, and possibly romantic attachments, Trent feels she may be a victim of a scam.  In order to check out what actually happens, Trent decides to attend one of the functions for himself.  At first, Calista Langley is delighted to see the famous author attend one of the events she hosts at her home.  Calista and her younger brother were orphaned, and came to live with their grandmother.  When she died, she left them her large home, but no funds to live on.  The appearance of the home leads people to believe that Calista is an heiress.  In order to afford to continue living in the house, Calista set up a discreet business with select clients.  The clients are single people looking to mingle with others who have similar intellectual interests.  Calista’s brother investigates all potential clients to ensure there are no married men or fortune hunters among them, and the salons are all respectable.

Calista is intrigued by the scarred, but captivating author.  Trent suffered acid burns along one side of his face and on his body and arm.  He’s secure enough in himself that he doesn’t hide the scars, but intuitive enough to know when they really bother someone.  He’s happy to find that the lovely Calista is not repulsed by him.  In a short amount of time, Trent learns that Calista is being stalked by a man she almost became engaged to a year ago.  Nestor pursued Calista until she told him the true state of her finances, then he jilted her, and soon after, married an heiress.  Now, suddenly he’s back, determined to win Calista, despite the fact that he’s married.  There has also been an unknown person who has been leaving creepy mourning gifts for Calista.  When Trent offers to help, Calista is shaken enough to accept.

As Trent and Calista, along with their siblings, attempt to solve the mysteries, they become more attracted to each other and begin a discreet affair.  I found Calista to be intelligent, determined, brave, and very likeable.  Trent is also very intelligent, confident, honorable, sexy, and a little vulnerable.  They make an excellent investigative team as they search for all the answers.  Yet, I felt like the romance lacked the usual passionate feeling I’ve come to expect from Amanda Quick.  There was sex, but not the depth, or warmth I so enjoy reading about.  Still, the mystery was very well done, and the suspense kept me enthralled.  I recommend this well written book for fans of historical suspense, with a touch of romance.  You can always expect a twist at the end of a book by Amanda Quick, and ‘TIL DEATH DO US PART does not disappoint.