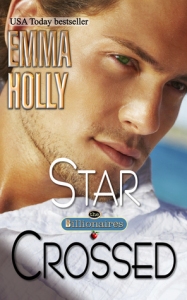 A.J. Hoyt is as cynical as she is badass, a former cop turned bodyguard. A lifetime of hard knocks taught her not to trust—a handy trait in her line of work. Given the right motivation, she knows anyone will betray their near and dear. Rather than let them betray her, A.J. keeps her shields nailed up.

On the surface, Luke Channing’s life seems charmed. He’s a Hollywood action hero whose looks inspire fantasies. Known for being easygoing and kind to fans, his latest film made him a billionaire producer. Problem is his high profile has attracted a dangerous admirer.

Threats like the one Luke faces aren’t new. A.J. saved his life once already. Now he doesn’t trust anyone but her to guard him. With a deadly enemy lurking in the shadows, this star-crossed pair better pray A.J.’s skills are sharp!

Click on title below for Amazon link:
Star Crossed (The Billionaires) (Volume 4)

A J Hoyt always wanted to be a police office.  She lost her job almost as soon as she achieved her goal by accusing her superior of wrong doing without sufficient evidence.  With law enforcement no longer an option, she joins her father’s security firm.

Luke Channing is a former model, now a wealthy and successful movie action star and producer.  At a red carpet appearance, a sniper takes shots at Luke and his companion.  Luke decides he needs to beef up his security, and he knows that AJ is the person he wants for the job.  Years ago, AJ rescued Luke from another attack made on him, and he’s never forgotten her.  In fact, he tried to pursue her for a relationship, but finally gave up after she never returned any of his phone calls.

AJ’s father accepts the job, and sends AJ to head up the security team.  AJ is a career driven woman who avoids serious relationships.  She has built up walls around her heart, and gives off the vibe of a calm, cool, collected professional.  She was very attracted to Luke years ago, but knew that a relationship would go nowhere, so she never responded.

Luke’s career has skyrocketed, and he’s had many encounters and relationships over the years, but he always remembered AJ.  Beneath the roguish persona, he has a heart of gold and is truly a kind and generous man, sometimes to his own disadvantage.  I love how he’s the only person who calls AJ by her real name of Alexandra, and takes her sometimes scathing comments with good humor.

As AJ and her crew work to protect Luke, and to find out who’s stalking him, their attraction bubbles over into a steamy affair.  Little by little, Luke tears down AJ’s walls one small piece at a time.  His genuine affection and care win AJ over, and they fall in love despite all their differences.  Before they can even think about a future, AJ has to find out who the stalker is before it’s too late.

STAR CROSSED is an exciting, fast paced story, full of suspense, romance, and lots of steam.  I enjoyed this read very much, and recommend it, especially for those who like their romance hot!