Review – The Duke by Kerrigan Byrne 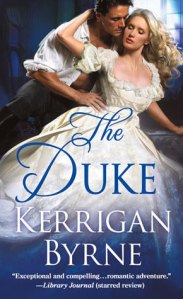 He is noble, notorious, and takes no prisoners…

Strong as a Viking. Handsome as Adonis. Rich as Midas. Collin “Cole” Talmage, Duke of Trewyth, is the stuff that legends are made of. He’s the English Empire’s golden son–until fate has its way with him. Cole’s family is killed and his closest comrade betrays him on the battlefield, leaving him gravely injured. But Cole is not one to dwell on misfortune. He is a man of duty, honor–and desire. And now he’s ready for the fight of his lifetime…

Imogen Pritchard is a beautiful lass who works in a hospital by day and as a serving maid at night. Years ago, when she was young and penniless, she ended up spending a scandalous night with Cole, whose tormented soul was matched only by his earth-shattering passion. Imogen entered a marriage of convenience―one that left her a wealthy widow―but she never forgot Cole. Now that her long-lost lover has turned up in her hospital, injured and with no memory of her, Imogen is torn: Is it a blessing or a curse that their past remains a secret to Cole, even as his new passion for her leaves him wanting to protect and possess her…at all costs.

Click on title below for direct Amazon buy link:
The Duke (Victorian Rebels)

Collin Talmage, known as Cole, has just inherited the title of Duke of Trenwyth at the very high cost of losing his whole family.  While he is hurting and grieving, he is also scheduled to leave on an assignment for the crown tomorrow, so tonight he’s seeking out some human comfort.  When he walks into the Bare Kitten, a seedy tavern, he immediately focuses on Ginny, one of the barmaids, as the one he wants to spend the night with.  What Cole doesn’t know is that Ginny is not a lady-for-hire, as the other women working there are.  Ginny is really Imogen Pritchard, a nurse, who is supporting her mother and younger sister.  Her deceased father owes a substantial debt to the tavern’s owner, and she is working in disguise as a barmaid to whittle down the balance.  She recognizes who Cole is, as the newspapers have been full of his tragic story, and she can see the grief and sadness in his eyes.  Still, she refuses when he attempts to buy her for the night.  When she is told that the amount Cole paid is enough to reduce her servitude by a whole year, she agrees, knowing full well what this makes her.  Cole treats her with tenderness and courtesy, and they share a special bond and a warm, passionate night.  When Ginny leaves him, she realizes that she’ll never see him again, in fact, he may not survive his mission, but he’s taking a piece of her heart along with him.

A year later, the duke is brought to Imogen’s hospital, severely injured, and not expected to survive.  Imogen is tasked with nursing him, and ends up saving his life, though it costs her job.  Cole doesn’t recognize her as Ginny, and in his illness, rejects her and her care.  Rescue comes in the form of an elderly earl, a patient at the hospital, who is dying.  This earl values Imogen and appreciates all she has done for him, so he proposes marriage.  Imogen accepts, and is now a wealthy countess, who lives next door to Cole.  When the earl dies months later, Imogen begins working on her new passion, rescuing prostitutes, and other down-on-their-luck people.  Cole is infuriated at this activity happening next door to his home, and he is not shy about berating Imogen publicly and privately.  He believes she tricked the elderly earl into marriage and considers her nothing more than riffraff and totally beneath him.

Imogen is, of course, hurt by Cole’s assumptions and accusations.  The man she was a bit in love with is gone, and in his place is a sarcastic, angry, bitter, scarred man.  She has no idea of the extreme torture that Cole endured when he was captured, or that the only thing that kept him sane at all was his memory of Ginny and their magical night.  Since his return, he has searched endlessly for her, only to keep coming up with a dead end.  He feels that she, Ginny, is his only chance at retaining any of his humanity.  Without her, he knows he’ll fall completely into darkness.  Yet, slowly, he begins to see that Imogen is not the awful schemer he imagined.  He sees her character, her genuine commitment, and her care for those she rescues.  Then he sees her beauty, and begins to desire her.  What will happen if he finds out that Imogen is Ginny?  Imogen is determined to keep her past hidden, as if it became known, she will be ruined, and all her work will have been for nothing.

Kerrigan Byrne has written another powerful and dark masterpiece.  I don’t know how she does it, but I was in that prison with Cole, I felt his rage and anguish.  I detested the person he had become, but I totally understood it and didn’t hate him, just what was done to him to cause it.  I admired his search for Ginny, how he never gave up, looking to fight a way out of the darkness that had become his life.  I also had to admire Imogen for being strong enough to give up on any chance of a relationship with Cole when he rejected her back in the hospital.  Then when his treatment of her should only have earned her rejection, she stayed strong in her beliefs, and yet considered his injuries and treated him with compassion.  THE DUKE is not for everyone.  It’s gritty and dark and in-your-face, and I found it compelling, intense, passionate, and beautiful.  The characters are flawed, have done awful things, yet manage to find a measure of redemption through the power of love.  The Victorian Rebels series is magnificent, and I recommend THE DUKE most highly.  This one will surely be on my favorites list this year.  Fasten your seat belt and settle in for a thrilling ride.