Series: Lords of the Highlands, #1

When Akira Ayres finds the brawny Scot with a musket ball in his thigh, the healer has no qualms about doing whatever it takes to save his life. Even if it means fleeing with him across the Highlands to tend to his wounds while English redcoats are closing in. Though Akira is as fierce and brave as any of her clansmen, even she’s intimidated by the fearsome, brutally handsome Highlander who refuses to reveal his name.

Yet she can never learn his true identity.

Geordie knows if Akira ever discovers he’s the Duke of Gordon, both her life and his will be forfeit in a heartbeat. The only way to keep the lass safe is to ensure she’s by his side day and night. But the longer he’s with her, the harder it becomes to think of letting her go. Despite all their differences, despite the danger-he will face death itself to make her his . . .

THE LORDS OF THE HIGHLANDS SERIES 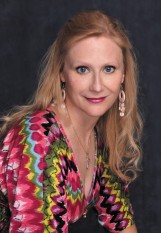 Amy Jarecki is a descendant of an ancient Lowland clan and adores Scotland. Though she now resides in southwest Utah, she received her MBA from Heriot-Watt University in Edinburgh. Winning multiple writing awards, she found her niche in the genre of Scottish historical romance. Amy writes steamy edge-of-your-seat action adventures with rugged men and fascinating women who weave their paths through the brutal eras of centuries past.

Curled under Geordie’s arm, Akira finally stopped shivering. All around them rain splashed. Everything was soaked and their little alcove smelled of horse—not a horrid smell, but not one she’d choose for her boudoir, either. If she had a boudoir.

She chose to ignore the voice in the back of her head telling her it wasn’t proper to allow a strange man to put his arm around her shoulders and offer her warmth. But there was something in the way Geordie looked at her that made her feel all warm inside and, moreover, protected. Aye, he’d been in a great deal of pain—was still in great pain—but since he roused from his last bout of unconsciousness, he’d behaved admirably. He’d brought the horse under control, figured out where they were, and formed a plan to take them to someone he could trust to provide her with an escort home.

With darkness, the air grew colder. Clutching her fists under her chin, Akira curled into Geordie’s heat. He smoothed his palm along her outer arm, his touch soothing.

When he turned his lips toward her, his warm breath skimmed across her forehead. “Try to sleep.” The gentle burr of his voice imparted all the more comfort.

But she couldn’t get too comfortable; she must to do her duty. He was still her patient. “I’m the healer. I should be telling you to do the same.”

His hazel gaze drifted to her mouth, and he grinned.

“Very well.” He pulled his arm away, but not before running his fingers across her back. Blessed tingles spread over her skin as if she’d been caressed by feathers. Oh, heaven help her, his touch was unbelievably sublime. If only she could ask him to run his fingers back and forth again—just one more time.

She reached for the hem of his kilt, then quickly snapped her fingers away. What had she been thinking? True, she’d applied the salve before, but that was when he was mostly unconscious and definitely before he’d put his arm around her shoulder and smiled at her like a…like a…brawny Highlander.

“Have you gone shy, lass?” he asked with a hint of humor in his deep brogue.

George Gordon, the Scottish Duke of Gordon, is taking part in a battle on the side of the Jacobites, but he’s doing so secretly.  He’s not displaying his clan’s banner or taking his own warriors along because he doesn’t want to risk losing his dukedom or his lands.  Unfortunately, Geordie (as he prefers his friends to call him) is injured and will no doubt be found soon by the Redcoats and be branded a traitor.  However, Akira Ayres, a young healer, who was searching the battle site for wounded men, finds him first.  She tends to the bullet wound in his leg, but soon the British approach, and they have to flee.  Akira, whose family is struggling to survive, agrees to being hired by Geordie, and will tend to his injury and travel with him as he heads to safety.

Geordie doesn’t reveal his status to Akira for two reasons – first, if she’s ever questioned about him, she’ll be unable to confirm his identity, and, second, he quite likes not being fawned over because of his title.  As they flee, Geordie inadvertently leaves behind his flask, which has the ducal monogram, and which is found by an overzealous British captain.  Said captain is determined to bring the duke to justice as a traitor, and even hopes that some of the duke’s lands may be his reward.  He refuses to give up, and travels all the way to the duke’s castle to confront him directly.

While travelling, Geordie and Akira were forced to be close to each other, sharing a single horse, and snuggling up to each other at night to stay warm.  As Geordie starts to heal, he begins to feel lust for the lovely gypsy healer.  Akira is an innocent, and is somewhat bewildered at feeling desire for the first time.  She fights it, knowing her own mother’s history, and how a woman can be loved and left.  Inevitably, they give in to their passion.  When they finally reach the castle, and it becomes obvious that Geordie is a duke, Akira is not sure where she stands.

THE HIGHLAND DUKE is the first book I’ve read by Amy Jarecki.  It’s described as the first book of a new series, yet I felt that I was missing information about the duke.  He is shockingly divorced, something very rare in 1703, but we don’t have many details.  I would have liked more information about his marriage, how the divorce came about, and why he was such a libertine while he was married.  This void left me wondering if he could ever be true to Akira, if and when they ever committed to a real relationship.  It also seems that Geordie and Akira didn’t give serious consideration to the difficulties that would occur because of the difference in their stations in life.  A duke is a far cry from a bastard gypsy girl, but perhaps it’s a testament to their intense romance, that any misgivings were secondary to their desire to be together.  Geordie certainly showed his determination and his heroic side in regard to Akira and her family.  If you enjoy an unconventional Scottish romance with an abundance of adventure, THE HIGHLAND DUKE may be just what you’re looking for.