Review – The Peculiar Folly of Long-Legged Meg by Jayne Fresina 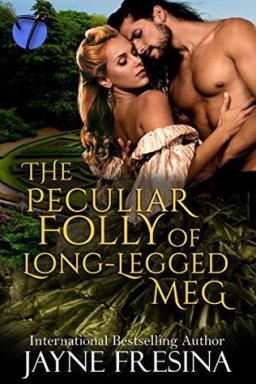 Persephone “Persey” Foyle, the Dowager Marchioness of Holbrooke, leads a happy, busy existence, tending her garden, overseeing her charitable missions, feuding with her stepson’s wife, and vetting potential suitors for her stepdaughter. As far as this lively widow is concerned, her life lacks nothing.

But when a young, famously-talented designer is hired to “improve” the grounds of Holbrooke estate—a task she has managed for eight years—Persey’s comfortable world is threatened. It doesn’t help that he’s hired by her nemesis, the new marchioness, or that his talents are all the mode among England’s Georgian aristocracy. He has no chance of impressing Persey. No chance at all.

Josias Radcliffe has worked hard for his success, and although he’s been warned about the dowager, no “meddlesome old crone” will stand in the way of his latest triumph. Until he runs into a pretty maid on his first day and talks her into showing him through the Holbrooke maze. Soon his course is altered, his plans changed forever.

Because the dowager has secrets and Joss is the one person who could expose her as a fraud. He knew her when she was Long-Legged Meg—a scullery maid who spun tall tales, and, so it is rumored, used her knowledge of herbs and plants to dispatch her enemies. Folk say she used those long legs to carry her away from the gallows.

Have they carried her far enough?

Click on title below for direct Amazon buy link:
The Peculiar Folly of Long Legged Meg

Meg was abandoned at birth, and was brought up as a “charity” child, never knowing who her parents were.  She was put into service as a scullery maid as soon as she was able, and had a series of cruel and abusive employers.  One of those employers was a tutor, and Meg surreptitiously absorbed all of his teaching lessons to paying children.  Her natural curiosity led her to becoming an expert with plants and herbs, and her ingrained sense of adventure led her to becoming an excellent storyteller.  When the townspeople begin wondering and whispering about the sudden deaths of two of Meg’s abusive employers, Meg decides it’s time to leave.  Though there was a young man in town who would have married Meg, he was happy to follow in his father’s footsteps and stay in this little town forever, something that would have stifled Meg.  So, she takes to the road with a traveling actress named Kitty, who teaches her all manner of things, some useful and some dishonest.  First of all, Meg changes her name – she is now Persephone, or Persey.

Over the years, Persey experiences her first love and her first heartbreak at the hands of a sea captain.  Then she meets the second son of a nobleman, with many faults, but who offers marriage to Persey, who accepts.  They are happy until he dies, and his father doesn’t want to support his deceased son’s widow.  While struggling to support herself, Persey then meets Lord Holbrooke, a widowed man with no happiness in his home.  Lord Holbrooke offers marriage, and Persey brings laughter and joy back to his life, winning over the affection of his young daughter, and even winning the reluctant respect of his stuffy son.  Unfortunately, Lord Holbrooke is much older, and passes away after they have a few happy years together.  Her stepson, Albert, is now ruling the roost, and has a wife who disdains Persey, who is now the dowager marchioness, and has been relegated to the dower house.

Persey, now thirty six years old, is content working with the flowers and plants she loves so well on the estate, and has a small circle of friends.  She also is involved in much charity work, determined to make up for the wrongdoings of her youth, and to help others who had a rough start in life, as she did.  Persey’s contentment is shattered when her stepson hires a famous landscape designer to completely makeover the estate, at the direction of his wife.  Persey feels her work, and generations of building the lovely gardens will fall by the wayside for some horrible, modern design.

The designer, Josias “Joss” Radcliffe, has been warned about the dowager marchioness, and instructed to not let her sabotage or influence him.  He’s confident that he’s more than a match for an elderly crone.  When he encounters Persey for the first time, not knowing who she is, he is struck like a lightning bolt with the feeling that this is the woman he has been waiting his whole life for.  Persey, mistaking him for one of the workers, banters with him and they steal a kiss.  Sparks continue to fly between Joss and Persey, even after they learn each other’s true identify.  But while Joss wants to start a fire, Persey wants to stamp it out before it has a chance to ignite.

Although Persey has done some less than honorable things in her life when she was younger, I couldn’t help but love her.  No matter how many times life knocked her down, she picked herself up and carried on.  She was true and genuine and loving with both her husbands, as well as caring for all those around her.  She retained a spirit of fun and joy, and also strength.  I wish I could meet her and have her for a friend!  Now, Joss – he is to die for.  He’s hardworking, ambitious, painfully honest and totally honorable.  He is so steadfast in his determination to win Persey, and he is off the charts hot!  THE PECULIAR FOLLY OF LONG LEGGED MEG is really unique.  My attention was held by the sad story of Meg’s younger years, then I was charmed by Persey’s successful married years.  But I became totally enthralled and captivated by the developing romance between Persey and the younger Joss, who, surprisingly, was a part of her past.  This book is beautifully written, and the ending and epilogue are so satisfying and sigh worthy, that I wanted to hug the book and start reading it again.  I highly recommend this entertaining and lovely book with the quirky title, as THE PECULIAR FOLLY OF LONG LEGGED MEG is pure reading delight.