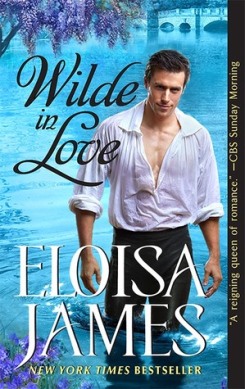 Lord Alaric Wilde, son of the Duke of Lindow, is the most celebrated man in England, revered for his dangerous adventures and rakish good looks. Arriving home from years abroad, he has no idea of his own celebrity until his boat is met by mobs of screaming ladies. Alaric escapes to his father’s castle, but just as he grasps that he’s not only famous but notorious, he encounters the very private, very witty, Miss Willa Ffynche.

Willa presents the façade of a serene young lady to the world. Her love of books and bawdy jokes is purely for the delight of her intimate friends. She wants nothing to do with a man whose private life is splashed over every newspaper.

Alaric has never met a woman he wanted for his own . . . until he meets Willa. He’s never lost a battle.

But a spirited woman like Willa isn’t going to make it easy. . . .

The first book in Eloisa James’s dazzling new series set in the Georgian period glows with her trademark wit and sexy charm—and introduces a large, eccentric family. Readers will love the Wildes of Lindow Castle!

Lord Alaric Wilde is finally returning home after years exploring the world and recounting his adventures in books.  He has been particularly reluctant to come back because it means he has to face the finality of his oldest brother’s death, but he knows it’s time.  He’s shocked when his ship docks to find hordes of female fans waiting to welcome him home.  It seems that his books have created quite a furor, and he’s become the equivalent of a modern day idol.  Thousands of pictures and souvenirs have been sold to his adoring fans, and a play has even been written about his adventures.  Alaric escapes to his home, only to find that a houseparty is being planned, and many of those starstruck ladies will be all too close at hand.

Willa Ffynche has had a very successful first season, and, in fact, has turned down fourteen proposals.  She is a down-to-earth lady with a plan – she will marry at the end of her second season, and to a private gentleman who fits her requirements.  Willa is a scholar who would never read something as lowly as one of Alaric’s travel chronicles, and she certainly wants no part of his celebrity status.  She intends to just watch with amusement as the other ladies plan and plot to catch his attention.  Willa shows a perfect face and behavior to society, while she does unbend with her closest friends, and reveals a bit more of her witty side.

Alaric truly dislikes the fawning and attention, though he’s scrupulously polite and charming to the ladies.  Willa catches his attention because of her beauty, but holds his attention because she wants nothing to do with him.  Over the course of the party, Alaric takes advantage of every opportunity to spend time with Willa, and despite her best intentions, she finds herself becoming very attracted to him.  Their stolen kisses evolve into steamy encounters as Willa discovers a passion and love that was not a part of her logical plan.  Alaric knows that Willa is the woman he wants for forever, yet Willa can’t seem to envision a future plagued with Georgian groupies invading her privacy.

WILDE IN LOVE was pure delight for me.  I loved Alaric from the beginning – he obviously has his head in the right place, and didn’t let it get turned by all the hoopla surrounding him.  He’s not perfect, as evidenced by his staying away to avoid facing his brother’s death.  Yet, he’s anxious to help the current heir manage the family estates, and he’s willing to give up travelling if that will make Willa happy.  He’s also sexy, honorable, and he proves he’s a hero by his actions when Willa needs rescuing.  Despite Willa’s stubbornness, I liked her from the beginning, as well.  Her perfectly logical plan was the result of being orphaned as a young child and wanting some control over her future.  She is loyal to her friends, intelligent, and has a definite soft side, as she shows to her pet skunk, Sweet Pea.  Yes, a skunk – and she is a sweetheart.  The story flowed beautifully, introducing  intriguing characters who will be the subject of upcoming books in this new series.  There was plenty of humor, charm, drama, and a very sweet, yet sizzling romance.  I adore WILDE IN LOVE, and highly recommend it.

Note:  Alaric and Willa’s love story is fully resolved in this book, but there is cliff-hanger / teaser for the upcoming story about North, Alaric’s brother, and his broken engagement and broken heart.  Author Eloisa James includes a note stating that this will be a recurring event for the books of this series.  I find this only intriguing, rather than annoying, as I’m happy if a book brings a happy conclusion for the featured couple.  I do have a wish – I’d like for one of the stories to miraculously find the oldest Wilde brother still alive – as his body was never found.  Hmmm, I wonder…..