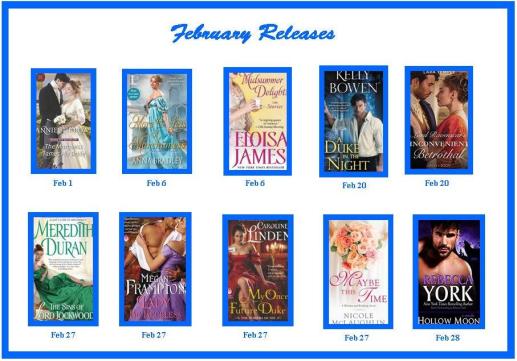 These are the books coming up on my reading and reviewing list in February.  There’s a smaller number than usual, which helps me out a bit, as I’m still playing “catch-up” after my bout with flu, and all the holiday hoopla.  Below is a blurb for each, and clicking on the underlined title will take you directly to the Amazon buy page – you know, in case those books on your TBR pile/list are getting lonely.

The Marquess Tames His Bride (Brides for Bachelors)

by Annie Burrows – A Brides for Bachelors story

The Marquess of Rawcliffe has always found his feisty childhood friend Clare Cottam enthralling. Forbidden by her strict father to pursue a relationship, he’s kept his distance. But the couple is embroiled in a heated argument that puts Clare’s reputation in danger, and Rawcliffe is forced to declare her his fiancée! It will be his pleasure to tame his independent, innocent bride…

More or Less a Marchioness (The Somerset Sisters)

by Anna Bradley – The Somerset sisters, three beautiful, headstrong debutantes in Regency London, are discovering that a bit of scandal is a delightful thing…

For the sake of propriety, and her younger sisters’ reputations, Iris Somerset has kept her rebellious streak locked away. But though she receives a proposal from Phineas Knight, Lord of Huntington, Iris can’t marry a man she knows isn’t truly enamored with her. In fact, Iris no longer wants to be chosen—she wants to choose. Under the clandestine tutelage of “wicked widow” Lady Annabel Tallant, she’ll learn how to steer her own marriage prospects—and discover her secret appetites.

What kind of debutante refuses a marquess? Finn is surprised, a little chastened—and thoroughly intrigued. This new, independent version of Iris is far more alluring than the polished socialite she used to be. Finn believed he needed a safe, quiet wife to curb his wilder impulses. But the more Iris surprises him, the more impossible it becomes to resist their deepest desires.

by Eloisa James –                      A Midsummer Night’s Disgrace
​Eloisa revisits the ​scintillating world of the Essex Sisters with a story featuring a young lady, Cecilia Bellingworth, who has decided she would rather ruin her reputation than endure further speculation about whether her children will be “silly,” like her brother, Billy.​ ​After two failed seasons, ​Cecilia ​decides she ​will dress as she likes​ (in a scandalous red dress!)​ and flirt outrageously​ (with a scandalous pianist!)​. Fortunately, a gorgeous musician at the Duchess of Ormond’s house party presents the perfect candidate for scandal…

At Midnight
​Elias Hempleworth-Gray has one thing and one thing only of value—his title, Earl of Leyton. Determined to leave England and the scandal of his gambler father behind, Elias hopes to turn his fortunes around and come back a respectable man to claim the only woman for him, Miss Penelope White. But Penny has other plans for the man she has loved all her life…plans that include a masquerade, a stolen kiss and a lost shoe.

Ever After
When she was sixteen, Miss Violet Leighton spent one blissful month romping around her family estate with Rothwell Talcott…thirty days of shared kisses, culminating in a very illicit afternoon in a berry patch. As Rothwell leaves for his grand tour, he gives his word of honor that he will return for her. Four years and seven refused proposals later, Violet is about to give up and marry when he finally returns. Now the Duke of Cambridge, Rothwell wants to make her his duchess. But how can Violet trust the man who stole her virtue—and then broke her heart?

Previously published in The Ugly Duchess.

A Duke in the Night (The Devils of Dover)

by Kelly Bowen – Duke. Scoundrel. Titan of business. August Faulkner is a man of many talents, not the least of which is enticing women into his bedchamber. He’s known—and reviled—for buying and selling companies, accumulating scads of money, and breaking hearts. It’s a reputation he wears like a badge of honor, and one he intends to keep.

Clara Hayward, the headmistress of the Haverhall School for Young Ladies, on the other hand, is above reproach. Yet when she’s reunited with August, all she can think of is the way she felt in his arms as they danced a scandalous waltz ten long years ago. Even though her head knows that he is only back in her life to take over her family’s business, her heart can’t help but open to the very duke who could destroy it for good.

by Lara Temple – Alan Rothwell, Marquess of Ravenscar, is furious when unconventional heiress Lily Wallace refuses him purchase of her property. He can’t even win her over with his infamous charm. But when fever seizes him and they’re trapped together, horrified, Alan realizes Lily’s attentions will compromise them both! His solution: take Lily as his betrothed before desire consumes them completely…

The Sins of Lord Lockwood (Rules for the Reckless Book 6)

BACK FROM THE DEAD, AN EARL SEEKS VENGEANCE…

Liam Devaliant, Lord Lockwood, was born into a charmed life. Charismatic, powerful, and wild, he had the world at his feet—and one woman as his aim. His wedding to Anna was meant to be his greatest triumph. Instead, in a single moment, a wicked conspiracy robbed him of his future and freedom.

…BUT WILL HIS LONG-LOST COUNTESS PAY THE PRICE?

Four years later, Liam has returned from death with plans for revenge. Standing in his way, though, is his long-absent bride. Once, he adored Anna’s courage. Now it seems like a curse, for Anna refuses to fear or forget him. If she can’t win back Liam’s love, then she means at least to save his soul…no matter the cost.

The Duke’s Daughters: Lady Be Reckless

by Megan Frampton – Lady Olivia refuses to repeat her siblings’ scandalous mistakes. Instead, she will marry the lord rejected by her sister and help with his good works. When he resists, Olivia forms another plan: win his lordship’s admiration by helping his illegitimate best friend find a bride. How difficult can it be to transform the rakish Edward Wolcott into a gentleman? To ignore his virile good looks? To not kiss him in a moment of impulsive madness? Apparently, very difficult indeed.

Edward Wolcott promised his ailing father he would marry well, and it appears Lady Olivia wishes to assist him. The sparkling firebrand intends to smooth his way through London’s ballrooms, parlors, and eligible ladies, while all Edward’s thoughts suddenly revolve around bedrooms . . . and Lady Olivia herself.  Only a scoundrel would seduce the duke’s most dutiful daughter. And only a truly reckless lady would risk everything to be in his arms . . .

My Once and Future Duke: The Wagers of Sin

by Caroline Linden – What happens at the infamous Vega Club . . .

Sophie Campbell is determined to be mistress of her own fate. Surviving on her skill at cards, she never risks what she can’t afford to lose. Yet when the Duke of Ware proposes a scandalous wager that’s too extravagant to refuse, she can’t resist. If she wins, she’ll get five thousand pounds, enough to secure her independence forever.

Jack Lindeville, Duke of Ware, tells himself he’s at the Vega Club merely to save his reckless brother from losing everything, but he knows it’s a lie. He can’t keep his eyes off Sophie, and to get her he breaks his ironclad rule against gambling. If he wins, he wants her—for a week.

A week with Jack could ruin what’s left of Sophie’s reputation. It might even cost her her heart. But when it comes to love, all bets are off . . .

Maybe This Time: A Whiskey and Weddings Novel

by Nicole McLaughlin – Jen Mackenzie has been knocked down more than a few times, but she always gets up and makes sure she has the last word. It’s the reason she now considers herself equal parts self-sufficient and free-spirit. But since losing her job and trying to help her mother beat cancer, real life―and her occasional careless choices―have begun to catch up with her. Her one saving grace: The Stag, a boutique distillery that has become Kansas City’s go-to wedding venue. The only catch: One of the owners, TJ Laughlin, happens to be the one man who somehow manages to make Jen feel inadequate.

TJ has secretly had a thing for Jen since high school. Now, as her new boss, it’s a daily struggle between revealing his feelings and wringing her beautiful neck. Only one thing is for certain: he can’t stand idly by and watch the woman he cares for struggle. She may be convinced that accepting TJ’s help is a weakness. But all he sees in Jen is beauty and strength, inside and out. As things finally heat up between them, can TJ find a way to convince Jen that love is about give and take―and having it all, together?

by Rebecca York – Did she save his life only to betray him?

Werewolf detective Knox Marshall makes a near-fatal mistake when he tries to get the goods on a drug lab in isolated Western Maryland. Captured and used as a test subject in a diabolical experiment, he manages to escape. After nurse Maggie Leland finds him naked and wounded in the woods, she patches him up; but she’s hardly prepared for the drug flashbacks that spin his mind out of control or the side effects that turn him on. She and Knox get close quickly. He thinks he’s found his lifemate—until it looks like Maggie is working with the drug dealers. When he realizes he’s wrong, is it, too late to save her life?