Review – Someone to Honor by Mary Balogh 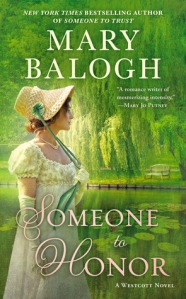 First appearances deceive in the newest charming and heartwarming Regency romance in the Westcott series .

Abigail Westcott’s dreams for her future were lost when her father died, and she discovered her parents were not legally married. But now, six years later, she enjoys the independence a life without expectation provides a wealthy single woman. Indeed, she’s grown confident enough to scold the careless servant chopping wood outside without his shirt on in the proximity of ladies.

But the man is not a servant. He is Gilbert Bennington, the lieutenant colonel and superior officer who has escorted her wounded brother, Harry, home from the wars with Napoleon. Gil has come to help his friend and junior officer recover, and he doesn’t take lightly to being condescended to—secretly because of his own humble beginnings.

If at first Gil and Abigail seem to embody what the other most despises, each will soon discover how wrong first impressions can be. For behind the appearances of the once-grand lady and the once-humble man are two people who share an understanding of what true honor means, and how only with it can one find love.

Lieutenant Colonel Gilbert Bennington has escorted his wounded friend, Harry, home to the country where he can fully recover and regain his strength after suffering severe injuries.  Much to his dismay, he learns that throngs of Harry’s family will soon be arriving, all anxious to see that their beloved relative is truly well.  Harry’s sister, Abigail Westcott, arrives, and has a memorable encounter with Gil, which causes them to immediately get off on the wrong foot and take an instant dislike to each other.  Gil’s intentions were to stay with Harry for an extended period, helping him back from invalid status without coddling him, and he looks forward to the Westcott family’s departure, not knowing that Abby has also made plans to stay when the rest of her family leaves.

The Westcott family finally packs up and departs, leaving a shocked Gil and Abby facing each other, realizing that they’re going to have to endure each other’s company.  Since they both have Harry’s best interests at heart, they treat each other politely, while trying to avoid each other’s company.  Still, there are bound to be times when they have to be around the other, and they come to a kind of truce, as well as an understanding and respect for each other.

There are certain kinds of heroes that I really appreciate, and Gil is one of them.  He’s a bit unpolished, though his career as an officer has led him to know how to perform the social niceties.  His demeanor appears unsmiling, even forbidding, but he uses that persona to keep people from getting too close, and learning about his “gutter rat” origins.  He was born to poverty, his mother being the daughter of a blacksmith, and his father, a member of the nobility, who never married her.  His father did finance his becoming an officer, and he married a general’s daughter.  His now deceased wife soon discovered that her marrying Gil was a mistake, and after she gave birth to their daughter, Katy, she left the child with her parents and went off to live a life of parties and fun.  Now that Gil is back from the war, he has found that his in-laws refuse to relinquish custody of his daughter to him.  His heart’s desire is to take his daughter to his home, Rose Cottage, and to create a loving family, something he’s never known.

Abby was raised to be an earl’s daughter, and just before her debut, it was scandalously discovered that her father was a bigamist, and she is, in fact, illegitimate.  Rather than try to worm her way back into society, Abby has decided to travel her own path.  She won’t marry a fortune hunter, or someone who would help her socially.  She’s not exactly sure what she’s seeking, but if she doesn’t find it, she’s content to remain unmarried.

As Harry recovers, and his two guests become more comfortable with each other, Harry makes the outrageous suggestion that Gil should marry in order to present a more stable home life to the judge who will decide who gains legal custody of Katy.  And he suggests that Abby is a likely candidate!  Though surprised and, at first, reluctant, Gil and Abby are not averse to the suggestion.  Even though they were initially hostile to each other, they felt an underlying attraction.  They discuss the option of marriage, and come to agree to proceed.  Though this is a convenient marriage, they immediately share a warm and compatible physical relationship, while Abby has an uncanny knack of seeing the honorable and wounded man beneath Gil’s rough exterior.

SOMEONE TO HONOR is a beautifully written, character driven romance which brings two wounded souls together.  Abby immediately makes the custody battle for Katy her own battle, too, and before long the whole extended Westcott family lends their support to the newest member of the family.  I love Gil and Abby, and it was so sweet when they realized that they had found genuine love.  There are many characters in the Westcott family, and if you haven’t read previous books in this series, you may feel a little at sea, though the relationships are explained here.  I think it’s a testament to Mary Balogh’s excellent writing that I remember each and every character from previous books, as well as their stories.  I adore this book and wholeheartedly recommend SOMEONE TO HONOR, as well as the WESTCOTT series, especially for readers who enjoy character driven, emotional romance, and wonderful family love.   ~Rose