Review – The Work of Art by Mimi Matthews 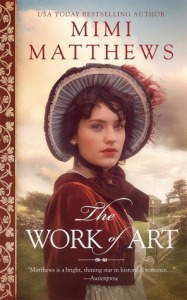 Hidden away in rural Devonshire, Phyllida Satterthwaite has always been considered more odd than beautiful. But in London, her oddity has made her a sensation. Far worse, it’s caught the eye of the sinister Duke of Moreland–a notorious art collector obsessed with acquiring one-of-a-kind treasures. To escape the duke’s clutches, she’s going to need a little help.

Captain Arthur Heywood’s days of heroism are long past. Grievously injured in the Peninsular War, he can no longer walk unaided, let alone shoot a pistol. What use can he possibly be to a damsel in distress? He has nothing left to offer except his good name.

Can a marriage of convenience save Philly from the vengeful duke? Or will life with Arthur put her–and her heart–in more danger than ever?

Phyllida “Philly” Satterthwaite has been happily living with her grandfather in Devonshire.  His death may leave her homeless, but her Uncle Edgar arrives to take her into his London household.  Edgar has an ulterior motive – he plans to dangle his uncommonly beautiful niece before the notorious Duke of Moreland, hoping to be able to profit from the situation.  Moreland is a cold man, known for his penchant to collect exquisite objects, and rumored to destroy those things he’s unable to acquire.  It’s also whispered that he may be responsible for his previous wife’s death.  Moreland is quick to take the bait, and soon he and Edgar have come to financial settlement for Philly, neither caring that she’s stated she won’t marry the duke.

Arthur Heywood is the second son of an earl, and a former Captain in the army.  He was grievously injured in Spain, and is now forced to walk with a cane, albeit slowly and painfully.  He’s spent the last three years in seclusion, in the country at his Somersetshire estate.  Arthur never liked being in the city, and his wounds, scars, and nightmares make it even less appealing.  Still, at the request of his father, he is discussing a business venture with Edgar, deciding whether it’s worth investing in.

Philly has occasion to encounter Arthur in the park on different occasions, believing their meetings coincidental.  Little does she know that Arthur is enchanted with her, something totally untypical for him.  It’s not her beauty, which he definitely admires, but her innate kindness to him, and her sensitivity to his injuries that attracts him.  As for Philly, she finds it very easy to confide in the quiet man who has captured her fancy, as well.  When she confesses that she’s about to be forced to wed the duke, Arthur offers the only solution he can think of – marriage – but, to him rather than the duke.  Philly accepts, and the couple weds in secret, and heads off to his country estate.

Arthur had originally promised Philly a “white” marriage, one in name only, but that resolution doesn’t last long.  This couple is so perfect together, and for each other that it’s almost breathtaking.  Make no mistake, they have problems, but they TALK to each other.  Arthur still has nightmares, and he harbors fears that he may unintentionally hurt Philly.  Then, several incidents occur, and it’s apparent that someone else is determined to harm Philly.  Has the duke decided to enact revenge?  How can Arthur protect his love with all his physical limitations?  I love this particular passage, when Philly is in extreme danger:

“Arthur!” A wave of unimaginable relief tore through Philly at the sound of Arthur Heywood’s deep voice.  She turned, expecting to find her husband standing at the entrance to the clearing.  Instead, her eyes fell upon someone else entirely.  A man she’d often heard about but never seen.  It was undeniably Arthur.  But it wasn’t HER Arthur.  It wasn’t the husband who kissed her and called her his sweetheart.  No.  This was a different man.  A dangerous man.  This was Captain Arthur Heywood.  This was the soldier who had crushed a man’s throat with one bare hand.

I’m a great fan of Mimi Matthews’s writing, and I believe this is my favorite of her books, so far.  Arthur and Philly are characters I adore, and their love for each other is what makes me read romance novels.  They don’t hide or disguise their feelings, and the self proclaimed moody and unpredictable Arthur goes to extreme lengths to protect the wife he cherishes.  I was genuinely moved by this warm and extremely well written book.  I know I’ll be reading it again in the future and recommend it wholeheartedly.    ~Rose