Review – About a Rogue by Caroline Linden 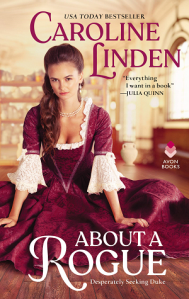 Bianca Tate is horrified when her sister Cathy is obliged to accept an offer of marriage from Maximilian St. James, notorious rake. Defiantly she helps Cathy elope with her true love, and takes her sister’s place at the altar.

It’s not even the match that was made…

Perched on the lowest branch of his family tree, Max has relied on charm and cunning to survive. But an unexpected stroke of luck gives him an outside chance at a dukedom—and which Tate sister he weds hardly seems to matter.

But could it be the perfect match?

Married or not, Bianca is determined to protect her family’s prosperous ceramics business, even when Max shows an affinity for it—not to mention a dangerous ability to intrigue and tempt Bianca herself. And when Max realizes how beautiful and intelligent and desirable Bianca is, he’ll have to prove he’s no rogue, but the passionately devoted husband she craves…

Maximillian St. James’s life has not been easy, as every means of support he had has abandoned him or been taken away.  Basically on his own, he has earned his living by becoming a gambler.  He has also earned the reputation of being quite the ladies’ man, and it’s a reputation well deserved.  When Max is summoned by a distant relative, and informed that he is in direct line to become heir to a dukedom, along with another St James cousin, he is shocked.  Years ago, when Max and his mother were in desperate financial straits, and applied to this family for help, they were given a grand total of five pounds.  Now he’s being given a huge living allowance, with the caveat that he become “respectable.”  While Max appreciates the windfall, he also is determined to use his inheritance to find a way to make his own fortune.  That way leads to a successful pottery company, owned by Mr. Tate, who has an eligible daughter…

Bianca Tate is passionate about the family pottery business, and is a major part of its success, thanks to her designing and research.  When Max appears on the scene, courting her older sister, Cathy, Bianca is incensed that her father is encouraging the match.  Unlike the fiery and outspoken Bianca, Cathy is timid and only wants to please her father, even agreeing to marry a man she doesn’t love.  Bianca urges Cathy to elope with her long time love, which she finally does, on the eve of the wedding.  Little did Bianca suspect that her angry father would offer her up as a substitute, or that Max would be willing to accept her as his bride, in Cathy’s place.

The wedding goes forward, with Bianca making it clear that it’s going to be a chaste marriage.  She believes Max to be a phony fortune hunter, intent only on acquiring her inheritance.  She doesn’t hide her dislike and scorn of Max, and he’s well aware of her feelings.  Max knew that Bianca didn’t like him while he was still courting Cathy, so he simply avoided her when he could, while maintaining a politeness to her.  Now that she’s his wife, he is intrigued by her fiery nature and her passion for the family business.  He even enjoys her slings and barbs, answering each one with a smile, and telling her that someday she will willingly come to him to make their marriage real in every way.

It’s kind of interesting that I started off reading ABOUT A ROGUE, and thought that it was never going to work for me, as the hero and heroine are just the kind of characters I didn’t like.  A rakish man who uses his physical attributes and charm with the intention of marrying into a wealthy family, and a woman who is direct to the point of being rude, as well as sarcastic and abrupt, made me shake my head.  But, I was so wrong!  Those are only the surface qualities of Max and Bianca. Max is truly tired of scrambling to make a living by gaming, and he works tirelessly to bring fresh ideas to improve the business and its bottom line.  He knew that he would never be able to become an integral part of the company without becoming part of the family.  In truth, we learn that he has been working for years for a very honorable cause, using funds he could ill afford to give up.  As for Bianca, she loved her sister enough to want her happiness rather than her own.  She is also willing to admit that she was mistaken about Max, and sees that he is genuine in his desire for the company’s success, as well as his desire to make a good, solid marriage.

Max’s attraction soon becomes raging desire for Bianca.  I love how he admitted that he was falling deeply in love, and how he put such effort into making Bianca happy.  While she was slower in coming to realize her love, she quickly became equally attracted to Max, and their coming together was hot and steamy.  I love the developing romance, and though it happened over a short period of time, the progression from enemies to allies to friends to lovers, seemed natural and right.  Of course, they encountered some obstacles, and I particularly like how quickly the last hurdle was resolved quickly and satisfactorily.  I found ABOUT A ROGUE to be entertaining, warm, romantic, and with characters I came to truly admire and fall in love with.    ~Rose