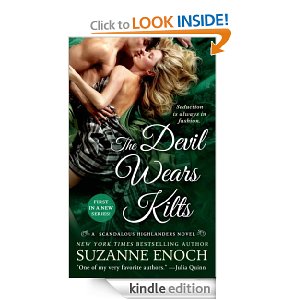 Ranulf MacLawry, Marquis of Glengask, is a half Scottish laird whose English mother hated Scotland.  Her actions made his father, his brothers and himself miserable, and left him with a strong dislike for all things English.  He inherited his title while still a teenager, as his father was killed by a rival clan.  His view of life is that only the strong survive, and violence is a necessary evil to protect his family and clan.  Ranulf’s younger sister, Rowena, is determined to have a London season.  When Ranulf refuses, she sneaks away on her own.  He, of course, follows, intending to immediately take her back home.  Rowena seeks refuge in the household of her mother’s friend, and that’s where Ranulf finds her.

Charlotte Hanover is a daughter of that household.  She is a little older than Rowena, and has an intense dislike of violence of any kind because her fiance was killed years ago in a senseless duel.  When Ranulf appears at the door, she isn’t afraid to stand up to him, and urge him to let Rowena stay for a short while.  Ranulf agrees, provided that she stay with the Hanovers and remain under their protection.

Although these two are polar opposites, they are immediately attracted to each other.  Charlotte is very opinionated about Ranulf’s violent way of life, and isn’t afraid to tell him so.  Ranulf actually admires her willingness to stand up to him, but tries to make her understand that life is different in Scotland.  I liked both of these characters, as they had reasons for their opinions and actions, but neither was so stubborn that they would not listen to the other.

As their attraction increases, Ranulf starts to feel very serious about Charlotte and makes an effort to curb his volatile nature.  One of my favorite scenes is when they are at a social function, and one of Ranulf’s enemies makes a thinly veiled insult about Charlotte. Instead of pummeling the man, Ranulf holds his temper and keeps his cool, thinking how impressed Charlotte will be. Meanwhile, Charlotte is wishing that he would beat the man to a bloody pulp.  Funny how feelings change, and that’s the beauty of this story – two very diverse people who are willing to change and make compromises for love.

This review originally appears on theseasonforromance.com