I Loved A Rogue by Katharine Ashe – Blog Tour and Giveaway

In the third in Katharine Ashe’s Prince Catchers series, the eldest of three very different sisters must fulfill a prophecy to discover their birthright. But if Eleanor is destined to marry a prince, why can’t she resist the scoundrel who seduced her?

She can pour tea, manage a household, and sew a modest gown. In short, Eleanor Caulfield is the perfect vicar’s daughter. Yet there was a time when she’d risked everything for a black-eyed gypsy who left her brokenhearted. Now he stands before her—dark, virile, and ready to escort her on a journey to find the truth about her heritage.

Leaving eleven years ago should have given Taliesin freedom. Instead he’s returned to Eleanor, determined to have her all to himself, tempting her with kisses and promising her a passion she’s so long denied herself. But if he was infatuated before, he’s utterly unprepared for what will happen when Eleanor decides to abandon convention—and truly live . . . 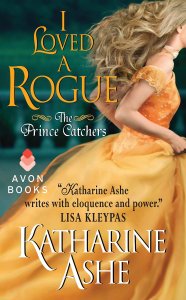 “You aren’t afraid.” Then he touched her. Just like that, skin upon skin, flame to flame. He stroked her cheek with the backs of his fingers and she did not move, did not flinch, did not turn away. The weight of all the stars hidden behind the clouds held her immobile.

“You are a wild bird, caged too long and desperate to be free,” he said. So close, his skin and scent. His mouth. Dear God, his mouth. If he kissed her, she would let him. She would fall to pieces. “You have believed every word they’ve said about you, Eleanor. You have accepted the cage, despite your nature. Even now when you are freed, you have allowed them to tie the jesses tight to ensure your return.”

“Ducal carriage. Lady’s maid.” His shadowy eyes, glittering gold, caressed her lips. “But they chose the wrong man for the job of bodyguard, didn’t they? Only you and I know that.”

“I’m not trying to convince myself that I am afraid,” she forced past the clutter of emotions in her throat. She had loved her life. He’d been the one to abandon the vicarage, not her. “There is no cage. No fetters.”

“Prove that this isn’t about fear. You aren’t in St. Petroc now. Your family is miles away. Do what you wish,” he added upon the purring growl that was wholly new and alarming. And intoxicating. She felt drunk.  She stared into his black eyes, but now they were not hard. They were hungry. He was suggesting something more than a journey, more than a simple adventure. As he had years ago, he was suggesting him.  He couldn’t be. Memories were playing tricks on her, making her imagine. And wish.

“I—I don’t need to prove myself to you.”

He shrugged and began to turn away. “As you wish.”

“I don’t want to make this journey in the carriage,” she said upon a reeling breath. “I would like to ride.”

He paused. Assessed her. Made her knees tremble again. “It’s a long road.”

A suggestion of the provoking grin appeared. “I suspect I’m more accustomed to the saddle than you.”

“Hire a horse for me and I will prove you wrong.”

“And if you don’t?” he said, turning fully to her, and she knew she’d won. He would do this for her.

“Then I will repay you the expense of it.”

He laughed. “I don’t want your money.” He walked to her, the lamplight casting his features in halos of heaven and hell. “What do I get from it?” His gaze dropped, slipping down her body, then slowly back to her face.  He was suggesting what she imagined. What she wished.  She tugged her cloak tighter. “The satisfaction of knowing you’re right.”

A slow smile curved his lips. “While that’s tempting, if I am to engage in this wager I’ll want more than that.”

“For each challenge, the winner chooses the prize.”

It was like they’d never been apart. Eleven years, he stood there a man, she a woman, but nothing had changed. …

Katharine Ashe is the award-winning author of historical romances that reviewers call “intensely lush” and “sensationally intelligent,” including How to Be a Proper Lady, an Amazon Editors’ Choice for the 10 Best Romances of the Year, and How to Marry a Highlander, a 2014 RITA® Award finalist. She lives in the wonderfully warm southeast with her beloved husband, son, dog and a garden she likes to call romantic rather than unkempt. A professor of History, she writes romance because she thinks modern readers deserve grand adventures and breathtaking sensuality too. Please write to her at PO Box 51702, Durham, NC 27717-1702 or visit www.katharineashe.com