Welcome to Thorncliff Manor, where London’s elite mix, mingle, and may even find their heart’s desire…

There are thousands of things Christopher, Viscount Spencer, would rather do than hunt for a bride, especially since experience has taught him that women are not to be trusted. Then he finds the intriguing Lady Sarah scrambling around in Thorncliff’s conservatory and he is instantly charmed by her passionate nature. But why is she so intent on avoiding him?

Lady Sarah would make the perfect bride for a peer—if not for a tarnished past that she’s hiding from the ton. A stay at Thorncliff Manor was meant to help her plan for her future, not fall in love. Yet Christopher’s kisses are irresistible, his gallantry enticing. When her secret stands to be revealed, will the truth ruin their dreams of happiness?

While living in Africa, Sophie turned to her lifelong passion: writing. When she’s not busy dreaming up her next romance novel, Sophie enjoys spending time with her family, swimming, cooking, gardening, watching romantic comedies and, of course, reading. She currently lives on the East Coast. 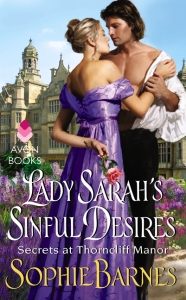 “Surely you must have considered leaving your scientific discoveries to someone—a legacy of sorts, if you will? Who  better  than  a child,  whom  you  can educate and influence so he or she will share your enthusiasm  for . . .” Christopher searched  his brain  for a suitable word but could only think of “ . . . slugs?” “Since you’ve developed such a keen interest in my research,” Rachel  said,  the  fire in her  eyes cooling a fraction  as she spoke,  “I’ll  have  you  know  that  I intend to publish my work as soon as it is completed. That, dear brother, will be my legacy. Husbands and children will only complicate the issue.”

“I don’t think Christopher intended   for you to have more than one,” Laura murmured.

Christopher’s lips twitched as he fought against the smile that threatened. Appearing to be amused by this conversation would not be to his benefit, trapped as he was with three women in a closed carriage.

“More than one what?” Rachel asked, her head swiveling toward her sister. There could be no denying her irritability.

“Did you ever consider,” Christopher remarked, “that there might be a lonely scientist out there who’d be thrilled to make you his bride?  Shared interests and all that?”

“There isn’t,” Rachel said, her expression so tight she looked positively frightening.  “Not unless I am willing to settle for a man who’s either thrice my age or one who can barely afford to put food on the table. I calculated the probability of it last year.”

“The statistics might have changed since then,” Christopher offered.

Rachel said nothing further.  She merely glared at him.

“Well, perhaps   I will focus on settling Emily’s future instead,” he said.  He wasn’t sure why he insisted on continuing this discussion, other than that he took pleasure in teasing his sisters.

“She won’t like your meddling   any more than you would ours,” Fiona said with a seriousness that belied her age. “And don’t forget that unlike the rest of us, you’re Papa’s heir. It’s your duty to find a wife and start producing children.”

Christopher angled his head just enough to stare down at his youngest sister.  “And what, pray tell, would you know about that?” he asked.

“Enough to inform you that you cannot accomplish it alone,” Fiona declared. Laughter sprang from Laura’s lips, and Rachel turned a deep shade of crimson. “You will need a lady to assist.”

Hoping to hide the rising sense of discomfort that always came with this particular subject, he assumed his most arrogant tone and uttered the only word that might be considered appropriate in such a situation. “Indeed.”

Unwilling  to  discuss  the  subject  further,  he proceeded to stare out the window,  forcing his thoughts away  from  the woman  he should  have married  five years earlier if she hadn’t turned  out to be a complete fraud.

“That can’t possibly be it,” Laura said a short while later.

Christopher turned toward the sound of his sisters’ voices all ooh-ing and aah-ing, as if they’d just stepped inside La Belle Anglaise, an exclusive fabric shop in Mayfair.  They were all blocking the window of course, preventing Christopher from glimpsing the subject of their excitement until Rachel moved aside, apparently through with her inspection.

Christopher leaned forward, equally amazed.  In the  distance,   nestled  against  a  soft  swell  of  hills, stood  a manor  . . . no . . . a palace,  more  splendid than  any he’d ever seen. Hell, it put Carleton House to shame with its regiment of marble columns standing sentry before each wing, the central part of the building paying tribute to a Greek temple.

“It makes Oakland Park look like a hovel,” Fiona remarked.

Christopher blinked.  To his amazement, he found he could not disagree.  Thorncliff was indeed a sight to behold, its magnificent size a true temptation that made him eager to explore.  “I’ve read that the original structure was built upon the ruins of a Roman settlement during the twelfth century.”

Christopher nodded as his gaze swept the length of the impressive building.  “There’s even supposed to be a vast network of tunnels running beneath it.” His interest in Thorncliff wasn’t a new one.  Intrigued  by castles since he’d  been a young  lad,  he’d read  about  the great  estate  on numerous occasions, and since his parents had announced that the Heartly family  would  spend  the  entire  summer  away  from home, he’d looked forward to the prospect  with great anticipation. There was also the advantage that here, it appeared, he stood a reasonable chance of avoiding his mother and the potential brides she no doubt longed to press upon him.  Smiling, Christopher sat back against the squabs.  Salvation was finally within reach.