Mad About the Major by Elizabeth Boyle – Virtual Tour and Review

The pampered daughter of a duke . . .

Lady Arabella Tremont has spent her entire life protected and overshadowed by her restrictive father. But she is a Tremont, after all, and the morning after she is nearly ruined at a ball by a handsome stranger, Arabella’s father demands she make an arranged match with an heir to a dukedom. In desperation, Arabella takes matters into her own hands.

Takes a London holiday with the most unsuitable of chaperones . . .

Major Kingsley is in London to avoid to his parents’ dreadful house party. To his surprise he runs into the enticing – and unforgettable — minx he met at a ball the previous night. Arabella, or Birdie, as he knows her, insists he owes her three favors-for he’s put her in a terrible pinch; Kingsley agrees, if only to delay his trip home and because the notion of spending the day with this enchanting bit of muslin is too tempting to resist. But all too quickly he discovers Arabella’s requests are hardly what he expected… 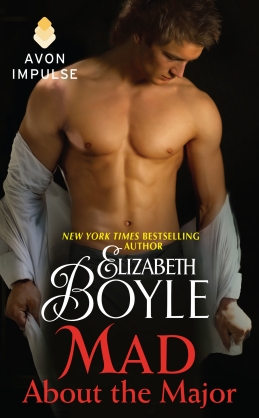 Major Kingsley (as he insists on being called)has delayed the inevitable as long as he could, but the time has finally come.  He fought in the war and travelled the world, but now his father, the duke, insists it’s time to come home and do his duty.  There’s a young lady the duke thinks is just perfect for him, and they will meet at the upcoming house party, and hopefully announce their betrothal.  As Kingsley ponders his sad fate at a masquerade ball, one of his friends decides to prank him by telling him that the lovely young lady dressed as a milkmaid is a notorious courtesan looking to bestow her favors on a lucky gentleman this evening.  Kingsley is anxious for some fun before life as he knows it comes to an end, so he approaches the woman.

Lady Arabella Tremont has had four seasons, and she is bored with all of it.  As she is bemoaning how all the gentlemen always say and do the same things, a very attractive man approaches her and begins to whisper outrageously seductive suggestions in her ear. Despite her shock, she is also intrigued, and truthfully, somewhat aroused.  Who is this man who would dare say such things to the daughter of a duke?  Before Kingsley has the chance to kiss her, Arabella’s father finds them, and proceeds to blacken Kingsley’s eye, and whisks her away before any gossip can start.  The next morning, the duke insists that he will allow no more delays.  It’s time for Arabella to marry, and he has just the candidate in mind.  She must pack, and they will head off to a house party, where she will meet her prospective husband.

When the time comes to leave, Arabella impulsively makes a mad dash for freedom.  She has no plan, she only knows she has to get away.  Her flight takes her right into Kingsley’s path.  He is starting his own sad journey to the same house party.  The two of them decide to join forces and escape their fates, just for the day.  Kingsley insists on only giving that much of his name, and Arabella uses “Birdie,” a family nickname for herself.

So the two set off on their day of adventure, not knowing at all who the other really is.  The try to trip each other up throughout the day, but they never reveal their identities.  Birdie’s life has been so restricted, that Kingsley’s tales of travel and the places he’s seen enthrall her.  She chooses crazy things for them to do, trying to cram a lifetime of freedom into one day.  Kinglsey has always found her attractive, but now he finds her quite loveable as well.

Each moment they spend together finds them becoming closer and fonder of each other.  Soon their simmering attraction comes to a full boil.  Will Birdie’s father allow her to marry a man not of his choosing?  Will Kingsley’s parents accept his wife if she’s not as high born as he?   Birdie and Kingsley have an adventure that’s a pure delight.  I couldn’t help smiling as I read this short story, as it was easy to figure what was really happening.  The journey getting to their happy ever after was a joy, with two delightful and sexy characters.  MAD ABOUT THE MAJOR is a light, well written, feel-good read that I enjoyed immensely and can definitely recommend

Author Info               Elizabeth Boyle was an antipiracy paralegal for Microsoft before settling down to write full-time. Her first novel, Brazen Angel, which won Dell’s Diamond Debut Award in 1996, also won the Romance Writers of America’s RITA Award for Best First Book, and was a finalist for Best Long Historical Romance. She lives with her husband in Seattle, Washington. She is also the author of Brazen Heiress.