The end of the bachelors’ wager is near, and Lucan Montwood can taste victory. Yet, on the precipice of finally gaining freedom from his debts, he’s incensed to learn that the beautiful Frances Thorne has fallen into an insidious trap in the guise of a new position. Lucan can’t deny the way her lips call to him and knows he must risk his own future to ensure her safety.

Convincing her to trust him is the hard part and resisting her is next to impossible. But falling in love with her? That’s far too simple.

USA Today bestselling author VIVIENNE LORRET loves romance novels, her pink laptop, her husband, and her two sons (not necessarily in that order … but there are days). Transforming copious amounts of tea into words, she is proud to be an Avon Impulse author of works including: “Tempting Mr. Weatherstone”, The Wallflower Wedding Series, and the Rakes of Fallow Hall series. 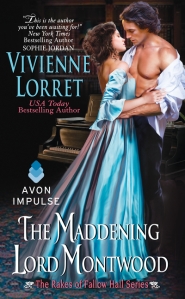 “Miss Thorne.” Lucan Montwood flashed a smile, revealing a dimple on one side of his mouth. She imagined a serpent must look the same before giving a taste of his venom.

“My lord,” she said through gritted teeth. After introducing Kaye, who then turned to help Mrs. Hunter with the tea, Frances expected him to leave at once. Yet he did not.

Lucan doffed his hat and tucked it beneath his arm. Not a strand of his dark hair was out of place. And beneath a thick brow, his amber gaze held a peculiar light, there in the shadows. The color of his eyes had always fascinated her. In her youth, before her mother’s death and before his family had betrayed her father, she would visit her father at Camdonbury Place. Yet all the while, she’d hoped to cross paths with Lucan. Even though they were only a year apart in age, he’d always seemed so worldly to her. And with those eyes, he’d looked at her as if he knew worldly things. The types of things that her mother had warned her against.

Her infatuation had been a girlish one, born of naiveté. Soon enough, she’d learned that men like Lucan were born deceivers. And Frances had had her fill of deception.

“What a serendipitous meeting,” he said. “Had I not been nearby, I’d not have had the opportunity to renew our acquaintance.”

Since he knew of her vehement dislike of him, she chose to ignore his goading. “Her ladyship was quite fortunate that you happened along. Although, I am surprised that you chose to rescue a perfectly innocent shawl instead of sending it to the gallows, as you and your family are wont to do.”

He stared at her for a moment—long enough for her to adjust her spectacles—as a slow, daring grin revealed that dimple of his once more. Truly, a man so diabolical should not have such an appealing dimple. She loathed that dimple and the man who wore it.

The enigmatic Lord Montwood has been intriguing me with his appearances in Everhart’s and Danvers’ stories – they are his fellow Rakes of Fallow Hall, who have already found their happy-ever-afters.  These three friends made a substantial wager that they wouldn’t marry, and Lucan Montwood is the last bachelor standing.  He has no intention of marrying – not only does he desperately need the winnings, he’s not fit for marriage, or so he thinks.

Lucan is handsome and charming, but he feels there’s a darkness within him.  In reality, the darkness is just unfounded guilt that he feels for events that happened in his childhood, things beyond his control.  In fact, the cruelties Lucan suffered have shaped him into a person who is always trying to come to the rescue of others.  One such instance is when his father’s man of business, Mr. Thorne, is framed and jailed for a crime he didn’t commit.  He will be hanged if Lucan can’t find a way to help.  Unknowingly, Lucan makes a devil’s bargain, which will come back to haunt him.

Thorne’s daughter, Frances, has no reason to trust men.  When her father was jailed, her fiance ran off with her dowry and married another.  Then when her father got out of jail, he stole her earnings to buy liquor, and can’t hold a job.  She has become somewhat jaded about the male sex, so she’s especially leery of Montwood’s continual appearances.

While Lucan’s intention is just to protect Frances, he finds himself really attracted to her, despite her initial hostility toward him.  Eventually she starts to see what a caring person he really is, and lets down her guard.

This was my favorite book, and my favorite of the rakes.  There is so much to enjoy in this story, a passionate love, a mystery, an odious villain, a matchmaking dog, and a swoonworthy hero.  I’m a huge fan of epilogues, and this one was particularly lovely.  THE MADDENING LORD MONTWOOD  is an excellent, well written book that I thoroughly enjoyed and recommend highly.