Three Proposals and a Scandal by Anna Campbell 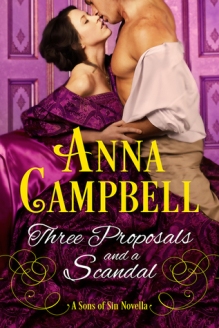 Whose hot kisses will melt the ice princess? All London is agog to know!

Will beautiful Marianne Seaton choose rich Lord Desborough or handsome Lord Tranter – or dark, dangerous Elias Thorne? Get ready for proposals and passion, rivals and revelations, secrets and scandals at the season’s most glamorous house party.

As the season reaches its brilliant climax, three very different men pursue beautiful Lady Marianne Seaton. She’s the marriage mart’s greatest prize – even if cruel and unjust gossip paints her as a woman cold and glittering as any diamond.

Then there’s the dangerous, compelling man nobody in their right mind calls eligible. Elias Thorne, son of scandal, reputed deceiver, possessing a rakish fascination no woman can resist. A lady might choose Elias as a lover, but as a husband, he’s too risky a bet. Even if Marianne’s forbidden yearning for him threatens her future and her reputation.

When Marianne’s suitors pursue her to the year’s most glamorous house party, there will be proposals and passion, rivals and revelations, secrets and scandals.

Let battle commence – but will the best man win?

There is someone who has seen another side of Marianne.  Elias Thorne, Baron Wilmott, found her to be beautiful and charming, and he soon lost his heart.  He’s determined to court her, but he comes from a very scandalous family, with no money, and he can provide no advantage to Marianne’s father.  In fact, her father convinces Marianne that Elias is simply another fortune hunter who only wants her because she is an heiress.  Believing the lie, Marianne now scorns Elias’ company and avoids him.

Elias, however, is not going to give up.  Oh, how I adored this man!  He is nothing like other members of his family.  He has already been working hard to restore his estate, and begins to try to convince Marianne that it’s her he wants, not her fortune.  He sees through Marianne’s coldness to the real, insecure person underneath.  As Marianne finally begins to believe him, she finds the strength to finally stand up to her father, and her actions when a new scandal develops almost had me applauding.

I absolutely adore this book.  I’m still amazed at how much Anna Campbell packed into a novella – a hero to swoon over, a heroine to cheer for, a couple of villainous characters, an honorable rejected suitor (who deserves his own tale?) and an immensely warm and satisfying love story.  I’m a huge fan of epilogues, and there is a lovely one here that gives a look into Marianne and Elias’ happy ever after.  I absolutely, positively recommend this one with much enthusiasm!