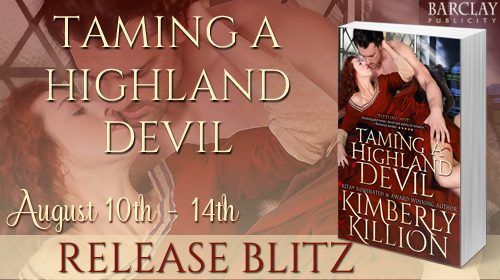 A CHOICE…
Laird Magnus Sutherland loves women. His prowess in the bedchamber has earned him the name Devil of Dunrobin, but no woman has ever stirred his heart. Magnus needs to provide his clan with an heir, which is the only reason he agrees to marry the neighboring chieftain’s sister. When his betrothed arrives, he discovers the chieftain has two sisters. If Magnus must bind himself to one woman, he intends to discover which is best suited to be his wife, for he wants more than a body to plant his seed. He wants a mate for life.

For one, she is thirty-two and would surely lose a competition to her beautiful, younger sister. Secondly, Laird Sutherland is a well-reputed rake, and she holds no desire to wed another faithless man. And thirdly, the sight of him makes her tingle, shiver and ache.

Will Effie be successful in thwarting Magnus’ advances, or will her body succumb to a temptation that can only lead to heartbreak?

Get More information at: Goodreads  | Amazon

They were perfect for one another, Effie decided as Laird Sutherland entered the Great Hall. Four of his kinsmen trailed him, all braw and thickly built, but none possessed the chieftain’s dominating presence. Hair, black as a raven’s eye, lay disheveled about his shoulders with a braid falling from each temple to mark his status. A sea-green and pale blue plaide, perfectly pleated, draped over a clean léine shirt, but what impressed her most was the arsenal he wore on his person—a basketsword hung from his hip, two daggers sheathed at his waist and the black handle of a sgian dubh poked out the top of deerskin boots.

He was a good match for Effie’s younger half sister, as well as Clan Mackay. Their union would make their clans a fearsome beast to behold. Clan Sutherland was known for their prowess in battle. They were powerful enough to protect themselves as well as Effie’s clan. The truth of the matter was, Clan Mackay needed Clan Sutherland more than Clan Sutherland needed the Mackays. And her brother knew it, which is one of the reasons Ian had traded their sister for an alliance after Da died.

The other reason was simple—Ian was as eager as Effie to see Vanna wed. Effie had taken over Vanna’s tutelage after Da ousted Vanna’s mam from the clan four years past. At nineteen, Vanna knew her letters and could manage a household, but Effie feared her sister might be a wee bit loose with her legs. Given Laird Sutherland’s lascivious reputation, Effie suspected he might find such a quality agreeable, so long as the girl took care not to spread her legs for his kinsmen.

’Twas a mistake Vanna’s mam had made.

Effie shook the thought out of her mind. Vanna was not to blame for Besse’s transgressions.

“Think ye the chieftain will like me?” Vanna swished long black hair over her shoulder and fiddled with the brooch pinning the heavy wool of her arisaid.

“The man agreed to the union in writing six months past. It matters naught if he likes ye.” The worry stitching Vanna’s thin black brows together made Effie wince. She would do well to remember Vanna was the daughter Da had coddled throughout her adolescence, unlike Effie who’d had two bairns in the nursery by nineteen. “I suspect ye will have Laird Sutherland feeding ye roasted almonds before dawn.” Effie gave her sister’s cold fingers a reassuring squeeze then stepped into her brother’s shadow where she belonged.

“Laird Mackay, welcome to Dunrobin.” The chieftains embraced in a fierce hug, smacking one another heartily on the back. “Ye must forgive my tardiness, but in my defense, ye are more than two months early. I didn’t expect ye and your retinue until the first thaw.” Laird Sutherland glanced down a line of Mackay warriors, all huddled in furs with melted snow beading their beards. He made a gesture toward one of his housecarls. Moments later, the fire burning in the hearth roared to life.

A wee bit o’ snow? Effie contained a snort. They’d traveled four days through a bleating blizzard, risking their horses’ health, as well as their own, because of Vanna’s impatience. Effie feared her toes would never thaw inside her worn leather brogues.

While the chieftains introduced their kinsmen, Effie peeked around her brother’s shoulder to study Laird Sutherland more closely. The man was as braw as they came. Black stubble shadowed his jaw but didn’t hide the strong angles of his chin and cheekbones. Silver-blue eyes the color of shallow seawater glittered beneath thick black brows. His nose, slender and straight, directed her gaze to sharply-defined lips.

Simply put, the man was…well, he was certainly easy to look upon.

Effie decided her sister had been blessed with good fortune, until Laird Sutherland turned toward his seneschal. A scar trailed a sinister red line from in front of his ear, down his thick neck and into his léine shirt.

Effie wanted to scold her. The girl slept peacefully night after night beneath the blanket of protection the Mackay warriors provided. War was essential to the security of their borders. No one knew this better than Effie. She had her own scars, though none marred her skin.

“Wake the servants and warm ale for our guests,” Laird Sutherland issued the order to no one in particular for his attention was now on Vanna. He added instructions to prepare their accommodations, then set himself before his betrothed.

“If this is your sister, then ye did her no justice in your missives.” Laird Sutherland eyed Vanna from tit to toe and awaited introductions.

Ian angled himself toward Vanna. “May I present Lady Vanna Mackay.”

Vanna’s smile could weaken any man’s resolve, and she knew it. She glossed her full lips, batted her curled black lashes and dipped low as Effie had taught her. “’Tis a pleasure to finally meet ye, m’laird.”

His bow was deep, reverent, but his eyes darkened with lust. ’Twas how men looked at Vanna. She possessed uncommon, exotic beauty, unlike Effie, who resembled every other green-eyed lass in the Highlands with unruly copper-colored curls and pale skin. The one physical attribute Effie had to her favor was her firm round breasts. Not that anyone ever noticed them.

Laird Sutherland noticed. His gaze flitted over Effie’s person then lingered long seconds on her breasts.

Her heart skidded, but she quickly pulled the seams of her mantle tighter around her bosom and tucked herself farther behind Ian.

“And who, pray tell, is this bonnie creature?”

Ian had to follow Laird Sutherland’s eyes before he replied, “This is Euphema Reay—”

“Effie, m’laird,” she corrected quickly and stepped forward beside Vanna to curtsey. As she stood upright, she glared at Ian. At four years her junior, Ian had the bitter disposition of a man twice his age. “I am my brother’s other sister.”

Laird Sutherland’s brows perked up, his head tilted, then his eyes shifted back to Ian. “I was not aware ye had two sisters.”

Ian scratched his beard. “I saw no point in mentioning it during our negotiations.”

Laird Sutherland’s gaze swept over her like a gust of heat before he met her eyes. “Are ye married, lass?”

“I’m widowed, m’laird.” She hated those words. Had hated them for two years.

“And past her years.” Ian’s callousness spiked her temper.

“Do ye still bleed?” Silence hummed in the wake of Laird Sutherland’s inquiry. The fire cracked in the hearth, raising the short hairs at her nape.

She considered herself keen, but it wasn’t until he asked his blatant question that she fully understood the path of the conversation. She held no desire to take another husband, much less take a husband from her sister. Staring wide-eyed at the rushes scattered about the floor, she felt almost ashamed when she answered, “Aye.”

Effie swore she heard Vanna’s teeth grind as Ian attempted to remedy the situation. “Forgive me, but ye agreed to marry Vanna in exchange for an alliance.”

“We’ll have our alliance.” He locked eyes with Ian. “But I’ll remind ye that I agreed to a union with your sister.” Laird Sutherland’s attention shifted between Vanna and Effie. “I’ll need a fortnight to decide which one is best suited to be my wife.”

BEYOND WRITING CREDENTIALS, Kimberly is also the Owner/Creative Director/Photographer of The Killion Group, the umbrella company over Hot Damn Designs. With 24+ years of experience in marketing, communications and design, Kimberly holds a Bachelor of Fine Arts, a Certificate in Web Design, and is an Adobe Certified Expert. The Killion Group has designed 5,000+ book covers and has 2,000+ clients, including Kensington Publishing, Amazon Publishing, Sourcebooks, Samhain, Trident Media Agency, Kristen Nelson Agency…and many, many more.

CLICK ON THE DIRECT LINK BELOW THE GRAPHIC TO ENTER TO WIN AN AMAZON GIFT CARD!