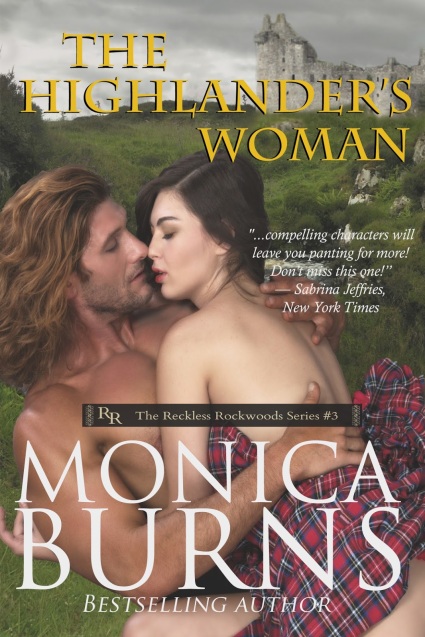 Julian MacTavish’s honor made him guard a friend’s secret. But his lies to keep that vow make it difficult to prove his faithfulness as a husband. When a terrible inferno scars Patience’s body and mind, she becomes a recluse, widening the divide between them. But it’s her lack of trust, not her disfigurement, which sends Julian home alone to Scotland convinced he’s lost her forever.
Forgiveness in the face of death comes easily to Patience MacTavish, but the thought of being a burden to her husband does not. When a twist of fate takes Julian’s sight from him, Patience returns home hoping to make amends for not having faith in him. Pity is the last thing Julian wants from anyone, especially his wife, and it’s his turn to question her sincerity. Now, Patience must convince her husband that she’s come home for no other reason than love, even if it means arranging a highlander’s seduction.

Available for purchase at

His grip on her arm relaxed as if he intended to let her go before he tightened his grip again. With a sharp tug, he pulled her into his chest. The sudden proximity of him made her heart do a somersault. Fingers splayed against his chest, he smelled of warm spice and bergamot. It had been too long since she’d been this close to him, and she trembled with a sudden need that scorched its way through her veins.

His mouth was so close to hers that with just a slight tilt of her head their lips would touch. Almost as if he’d read her mind, his hand cupped the back of her neck as his other arm wrapped around her waist and he pulled her tight against him.

“I have no idea why ye came back, Patience,” he said hoarsely. “But ye are treading a dark and dangerous path, lass.”

No sooner had he uttered his warning than his mouth captured hers in a demanding kiss. A tremor shot through her as her lips parted beneath his. Every bit the arrogant, commanding Highlander, his tongue swept into her mouth to duel tempestuously with hers. She knew it was folly, but she responded eagerly to his hot caress. The tart taste of gooseberry lingered in his mouth and danced across her tongue as his swirled around hers.

Caught up in the raw, sensual maleness of him, the heat radiating off him engulfed her until her body trembled with need. Hard, steely muscles pressed into her body with a powerful, unyielding strength that tempted and aroused her. She ached to feel his skin against hers until she didn’t know where she ended or he began.

She moaned softly as with each stroke of his tongue, she yielded to his silent seduction. The pounding of his heart vibrated against her fingertips as a desire so deep and strong made her blind to everything but his kiss. She forgot all that had brought them to this point and simply gave herself up to the sweet passion of the moment. The low growl rumbling in his chest sent a rush of delight streaking through her. In the next instant, he thrust her from him.

Heart beating wildly in her breast, Patience stared up at Julian’s stony expression. There wasn’t the slightest trace of emotion on his face, and tears welled in her eyes. Was he truly lost to her? Had she come to Crianlarich Castle for nothing? 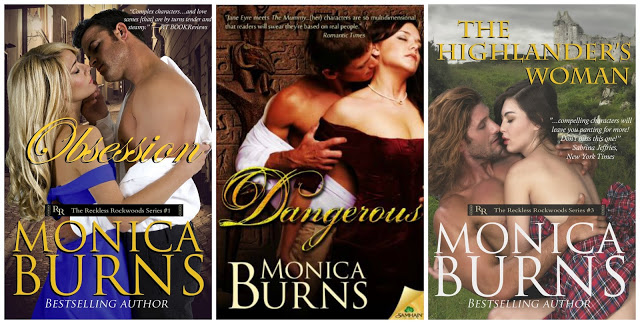 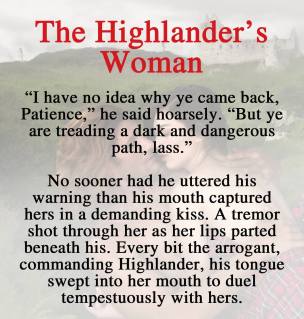 A bestselling author of spicy historical and paranormal romance, Monica Burns penned her first short romance story at the age of nine when she selected the pseudonym she uses today. Her historical book awards include the 2011 RT BookReviews Reviewers Choice Award and the 2012 Gayle Wilson Heart of Excellence Award for Pleasure Me. She is also the recipient of the prestigious paranormal romance award, the 2011 PRISM Best of the Best award for Assassin’s Heart. From the days when she hid her stories from her sisters to her first completed full-length manuscript, she always believed in her dream despite rejections and setbacks. A workaholic wife and mother, Monica believes it’s possible for the good guy to win if they work hard enough.

You can find Monica here: