Review – The Duke and Miss Christmas by Amelia Grey 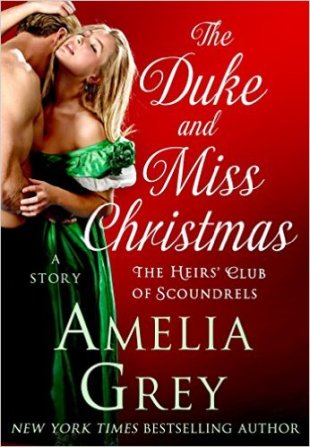 Crispin, the Duke of Hurst, has never met a woman he couldn’t handle–until he’s hit over the head with a basketful of mistletoe by a young lady who mistakes his intentions. When he gets into a tussle with her–and she can hold her own–Crispin knows he has finally met his match.

Miss Gwen Prim is mortified that she attacked a duke, but even more concerning is the way her resolve melts when she’s near him. She’s never felt this way about a London gentleman in her life. And with the magic of Christmas in the air, she may end up with a proposal she didn’t expect…in this delightful Regency gem, The Duke and Miss Christmas by New York Times bestselling author Amelia Grey

Crispin, Duke of Hurst, is out riding, when he spots a young girl sitting on the ground by herself in the middle of nowhere.  He approaches the young lady, and finds that she was collecting Christmas greenery, and fell from a tree and injured her leg.  Crispin decides to put her on his horse, and walk her back home, when she begins crying and screaming because her injured leg got caught in the stirrups.  As Crispin is trying to help her, someone sneaks up behind him and begins to beat him on the head.  This attacker is the young girl’s older sister, Gwen, who believes the youngster is being abducted.  The horse scampers away, leaving Crispin and his attacker rolling on the ground.  Crispin has no idea why he is being attacked by this woman, who is still attempting to pummel him and make her escape.  When she finally wears herself out and listens to Crispin, Gwen realizes he was only trying to help her sister.  Feeling very chagrined, she won’t tell him her name, so he calls her Miss Christmas.

To make matters worse for Gwen, she later learns she was beating up on a duke, and that her brother-in-law is a friend of his, and has invited him to dinner.  Surprisingly enough, Crispin likes Gwen’s feistiness, and wants to get to know her better.  After their less than stellar initial meeting, the couple encounters each other at many holiday events and begins to feel a strong attraction.

THE DUKE AND MISS CHRISTMAS is a very short story, so there are not major problems or hurdles to overcome, (although Gwen does have another suitor) it’s just a matter of the couple getting to know each other and to fall in love.  Crispin is flirtatious and teasing, and has somewhat of a rakish past, which does give Gwen some concern.  As for Gwen, she is very high spirited and open.  This is a light and entertaining read, perfect for indulging in when you take a break from the holiday bustle.  Charming characters and a romantic ending make this a recommended holiday read.