Enter to Win a
$25.00 eGift Card to Choice Book Seller 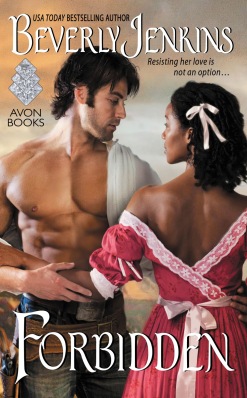 Rhine Fontaine is building the successful life he’s always dreamed of—one that depends upon him passing for White. But for the first time in years, he wishes he could step out from behind the façade. The reason: Eddy Carmichael, the young woman he rescued in the desert. Outspoken, defiant, and beautiful, Eddy tempts Rhine in ways that could cost him everything . . . and the price seems worth paying.

Eddy owes her life to Rhine, but she won’t risk her heart for him. As soon as she’s saved enough money from her cooking, she’ll leave this Nevada town and move to California. No matter how handsome he is, no matter how fiery the heat between them, Rhine will never be hers. Giving in for just one night might quench this longing. Or it might ignite an affair as reckless and irresistible as it is forbidden . . .

Spring 1870
“Stop him!” Eddy Carmichael screamed, scrambling to her feet from the mud. The man who’d snatched her purse and shoved her down was now running away down the dark Denver street. Taking off in pursuit, she called for help, but there were no policemen about and the few people on the walks nearby gave her no more than a passing glance. Up ahead, the thief turned a corner. Not wanting to lose him, she ran faster, but by the time she reached the spot, he’d disappeared. Frantically casting about for clues as to his whereabouts, she saw nothing. Anger turned to frustration and then to despair. Inside the purse had been her paltry month’s pay and the train ticket to California she’d purchased less than an hour ago. She’d been saving for the passage for months in hopes of starting a new life in San Francisco.

Now, penniless, angry, her skirts and cloak covered with mud, she set out for home.
Eddy dreamed of owning her own restaurant. It was a common belief that women like her, the descendant of slaves, had no right to dream. Yet, she knew from the articles she’d read in the newspapers that members of the race were pursuing theirs in spite of the disenfranchisement being ignored by Congress and the bloody lawlessness of Redemption ravaging the South. Colleges were being built, land was being purchased, and across the nation Black owned businesses were springing up like columbines in the spring. At the age of twenty- seven and unmarried, Eddy saw no such opportunities for herself in Denver, and now thanks to the thief those dreams were in peril.
Her home was a room she rented above a laundry owned by her landlady, Mrs. Lucretia Hampton. Eddy had been so sure of leaving town, she’d already given the woman notice and the new tenant was due to move in tomorrow afternoon. Although Mrs. Hampton would show concern over Eddy being robbed, the laundress was first and foremost a businesswoman and would likely not alter the agreement.
Putting her key into the door lock of her room, Eddy stepped into the darkness. As always, the acrid scent of lye wafting up from the laundry below filled the air. The room was so tiny even a mouse would have difficulty turning around, but on her meager salary it was all she could afford. Having worn the mantle of poverty since the death of her parents twelve years ago, she was grateful to have it. Making her way through the shadows over to the pallet that served as her bed, she struck a match and set the flame against the stub of candle in the old tin saucer that sat atop a battered wooden crate. While the wavering light filled the room, she removed her mud- stained cloak. Rather than attempt to clean it with the small bit of water in her basin, she hung it on the nail protruding from the back of the door with the hope that once the mud dried it would be easier to remove. She put her last pieces of kindling into the hearth. The resulting heat would be minimal but at least the flames held beauty, another element her life lacked. Warming her hands, she thought about her plight. She supposed she could remain in Denver and start saving again. Choosing that route meant finding another room to rent and a new job, because she’d given her employer notice, too. Six months ago, the hotel where she’d worked for the past three years as a cook had been purchased by a new owner whose first act had been to remove Eddy and every other person of color from the kitchen. He offered her a new job scrubbing floors for less money. The demotion was both infuriating and humiliating, but knowing how blessed she was to still have employment, she’d swallowed her anger and scrubbed the floors until they shone. Even then, he constantly found fault with her work and routinely docked her pay for what he termed inferior effort. She knew for a fact he’d never offer her the job back, and there was no way she’d be able to rent another room without one.
She ran her hands over her eyes and sighed. She didn’t want to stay in Denver, not even for another day. Her future lay elsewhere and she knew that as sure as she knew her name, but how could she could get the money for another ticket? Mrs. Hampton didn’t give loans. The Colored community was small and most were as pinched by poverty as she. Those who weren’t certainly wouldn’t loan her money even if she had the gall to ask. Her only relative in the city was her younger sister Corinne, and asking her for money made about as much as sense as asking the new owner of the hotel. After the deaths of their mother Constance and teamster father Ben in a blizzard, Eddy did everything she could to provide for herself and sister; she took in laundry, cooked for the wealthy, looked after their children, and swept their floors. But her beautiful baby sister chose to fall back on her looks and figure and took up with a pimp in the city’s red- light district. Although the pimp was long gone, Corinne still resided there along with her two young daughters. Eddy knew her sister would laugh in her face for having the audacity to ask for money. Corinne had nothing but derision for Eddy’s desire to better her life, but Corinne was her last resort. It was too late to pay her a visit at the moment, but she’d planned to stop by on her way to the station in the morning to say good- bye to her nieces anyway. Now, her visit would be about something different entirely.
“At least I won’t have much to pack,” she said softly. She’d sold what little possessions she’d had in order to help pay her rent and purchase the train ticket. What remained was her mother’s locket, a cast iron skillet, her small cookstove brazier, and a few meager changes of clothing. She had nothing else. Were she not so accustomed to having to claw her way through life, she might have collapsed and wept, but being made of sterner stuff, she’d learned long ago that weeping changed nothing. 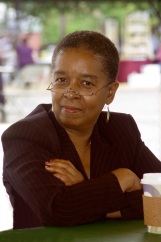 Ms. Jenkins is the nation’s premier writer of African American historical romance fiction and specializes in 19th century African American life. She has over thirty published novels to date.

She has received numerous awards, including: five Waldenbooks/Borders Group Best Sellers Awards; two Career Achievement Awards and a Pioneer Award from Romantic Times Magazine; a Golden Pen Award from the Black Writer’s Guild, and in 1999 was named one of the Top Fifty Favorite African-American writers of the 20th Century by AABLC, the nation’s largest on-line African-American book club.
She has also been featured in many national publications, including the Wall Street Journal, People Magazine, Dallas Morning News and Vibe Magazine. She has lectured and given talks at such prestigious universities as Oberlin University, the University of Illinois, and Princeton. She speaks widely on both romance and 19th century African-American history and was the 2014 featured speaker for the W.W. Law Lecture Series sponsored by the Savannah Black Heritage Festival.
Website | Facebook | Goodreads | Twitter