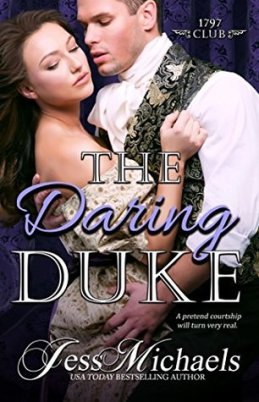 The first book of the much anticipated 1797 Club series from USA Today Bestselling author Jess Michaels. The Dukes are coming!

The wild and charismatic Duke of Abernathe is the kind of friend anyone would wish to have. He even formed the 1797 Club, consisting of ten men who would all be dukes. But he has full-throatedly declared he will never marry and no one understands why.

But Miss Emma Liston doesn’t care why. A longtime wallflower with an absentee father who is a scandal waiting to happen, she needs to marry. Now. She decides to take a wild chance and ask the help of her friend Meg’s brother James. She asks him to pretend he’s interested in her just long enough to gain the attention of others. He agrees but is quickly taken aback by how easy everything is with Emma.

When her father returns, threatening her with a terrible future, their courtship swiftly becomes all too real. Will James ever reveal the true man beneath the outer shell? And can Emma discover her own worthiness before it’s too late?

James Rylon, Duke of Abernathe, was mistreated and despised by his father, who was bitter that his beloved first son and heir died, leaving James to carry on the title. The former duke’s scorn also extended to his second wife, James’s mother, causing her to seek oblivion in alcohol.  With such dysfunctional parents, and only his sister, Meg, to love him, James and his friends at school formed a club of future dukes.  The purpose was for them to teach and support each other, and these ten boys soon became as close as brothers.  After his father’s death, James even arranged a marriage between one of them and his sister.

Emma Liston has had four seasons.  Without family connections, a large dowry, or great beauty, there is little chance she’ll make a match.  She’s generally a wallflower, dancing only a dance or two.  To her surprise, she’s approached by Meg, sister to a duke, who strikes up a friendly conversation.  When Meg’s mother bursts in, obviously staggeringly drunk, Emma is quick to help Meg remove her on the pretense of her being ill.  James has seen what was happening from across the room, and joins them, helping his mother leave before she creates a scene.  James knows that Emma could gossip and cause them much grief, so he asks her for a dance, in order to find her intentions.  Emma wastes no time in setting the duke straight, telling him she has no intention of spreading tales.  James is not used to such forthright speaking, especially from a woman, and he begins to admire the wallflower with the lovely eyes.

Meg is also appreciative of Emma’s support, and she begins inviting her to social activities.  The two become best friends, almost amazingly instantaneously.  This also means that James is now seeing a lot of Emma, who intrigues him with her honest speaking and lack of flattery.  As these two become friends, they agree to pretend to have a romantic interest in each other – this will increase Emma’s consequence with other gentlemen, and will discourage ladies hoping to snare James.  Meg really would like to marry and have a family of her own, while James made a vow to himself never to marry after seeing the example his parents set.

As they get to know each other, Emma begins to fall in love, while James begins to fall in lust.  James is too honorable to ruin Emma, but he can’t seem to keep his hands off her, and her response to his advances is scorching.  James has developed an outward charming facade, leading all to believe he’s happy and devil-may-care, yet Emma is perceptive enough to see the hurt he still harbors from when he was a child.  This hurt has twisted his thinking about love and marriage, and all he wants for his future is revenge on his father, who is no longer there to care.  In spite of this, I love James, and the way he treated Emma as his equal.  He sees her beauty and admires her character.  Emma is kind and plainly spoken without being obnoxious.  I adore that they always spoke the truth to each other.

I found THE DARING DUKE to be a fantastic read.  James and Emma are both wonderful characters, who have suffered at the hands of their parents.  I love that author Jess Michaels did not follow the easy path for this couple to come together through a well used plot device, but rather forced James to confront his own feelings.  This first installment of the 1797 Club series is well written, well paced, emotional, and romantic.  I recommend THE DARING DUKE highly, and can hardly wait for the next installment.