Review – The Most Dangerous Duke in London by Madeline Hunter 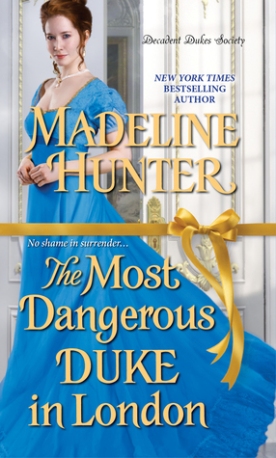 FAINT OF HEART NEED NOT APPLY
Clara may be the woman Adam wants, but there’s one problem: she’s far more interested in publishing her women’s journal than getting married—especially to a man said to be dead-set on vengeance. Though, with her nose for a story, Clara wonders if his desire for justice is sincere—along with his incredibly unnerving intention to be her husband. If her weak-kneed response to his kiss is any indication, falling for Adam clearly comes with a cost. But who knew courting danger could be such exhilarating fun?

Click on title below for direct Amazon buy link:
The Most Dangerous Duke in London (Decadent Dukes Society)

Adam Penrose, Duke of Stratton, has returned to England after five years of self exile in France.  Adam left when his father, the victim of rumors of treason, killed himself.  While in France, he fought three duels defending his father’s honor – two of the men died, and the third was seriously injured.  Now the French government wants him gone, and he has been summoned home to England by the Monarch himself.  Most of society is giving Adam a wide berth, as now rumors swirl around him, saying that he is out for revenge.  Those rumors are, in fact, true.  Adam is determined to find out the name(s) of those responsible for destroying his father’s reputation, and exacting revenge.  At the top of his list is the Earl of Marwood and his family, who have a long standing feud with his own family.  Imagine Adam’s surprise when the dowager Countess of Marwood invites him to meet with her, and offers to end the feud by having him marry her younger granddaughter, Emilia.

Clara Cheswick is Emilia’s older sister, and the product of the late earl’s first marriage.  Clara’s father loved her deeply, and provided a substantial inheritance for her, so that she could be independent, and would never have to marry or depend on the generosity of her family or a husband.  Her unconventional upbringing has left her determined never to marry, which would put her land and money in the control of her husband.  She’s happy being the anonymous publisher of an eclectic news magazine, and socializing with her few close friends and colleagues.

While Adam actually considers the offer to wed Marwood’s daughter, Emilia, who is a very beautiful young lady, he sees Clara riding in the distance and immediately feels drawn to her.  He arranges to meet her, only to find her prickly and not at all interested.  Her spirit only rouses Adam’s interest even further, and he begins his pursuit.  The thought of using this connection somehow in his revenge does occur to Adam, but his attraction to Clara is purely personal.  Time after time, he puts himself in her path, only to be rebuffed.  While Clara can’t deny that she is drawn to the dangerous and handsome duke, she will resist him.  Or, so she thinks.  Adam has a dark, brooding presence, and this appeals to Clara.  Soon this independent lady decides that since she will never marry, she wants to taste passion with the man who stirs her as no one else ever has.  Their affair is scorching!

THE MOST DANGEROUS DUKE IN LONDON is a book I read in one sitting, and has all the qualities I love in a great story.  I found Adam just as appealing as Clara did – I love a brooding hero.  Yet, he has a code of honor.  He treated Clara beautifully, even though she may have been his enemy’s daughter.  He’s generous and honest, even answering Clara’s questions about his motivation truthfully.  And he is as hot as all get out!  Clara, in turn, is generous as well, and shows her loving nature once she decides to accept Adam as her lover.  I love her courage in standing up to her shrew of a grandmother, in particular, her actions at the book’s end.  This story flowed effortlessly, contained a swoonworthy romance, steamy passion, great characters, and a very satisfying resolution.  I highly recommend THE MOST DANGEROUS DUKE IN LONDON, which is one of author Madeline Hunter’s best, and goes on my favorites list for this year.