Review – Second to None by Nancy Herkness 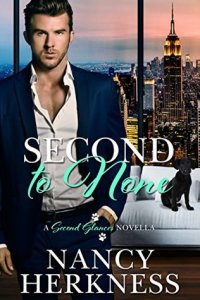 Billionaire chemist Max Varela is selling his company and leaving New York for good when Emily Wade bursts into his office, desperate for his help in funding her program for disadvantaged kids and shelter dogs. Seven years ago, he fell in love with her when she was married to another man. To fight the unbidden attraction, he cut off all contact—but he’s never forgotten her.

Ever since her husband died, Emily has poured her heart and soul into the after-school care center. Seeing Max reawakens the pain of her loss, but it also brings unexpected hope for the future. As emotions thought long gone resurface, the two begin a passionate affair that seems destined for a fairy-tale ending.

That is, until Max reveals that he’s moving to Chicago in a matter of weeks and wants Emily to uproot her daughter and her life to come with him. If a second chance at love is possible, someone’s got to give.

Nancy Herkness is the author of the award-winning Whisper Horse series, published by Montlake Romance, as well as several other contemporary romance novels. She is a two-time nominee for the Romance Writers of America’s RITA® award. Her new series, Wager of Hearts, follows the romantic adventures of three very wealthy men who make a life-changing bet.

Nancy is a member of Romance Writers of America, New Jersey Romance Writers, and Novelists, Inc. She has received many honors for her work, including the Golden Leaf Award, the Maggie Award in Contemporary Romance, and the National Excellence in Romance Fiction Award. She graduated from Princeton University with a degree in English literature and creative writing.

A native of West Virginia, Nancy now lives in suburban New Jersey with her husband and two mismatched dogs.

For more information about Nancy and her books, visit www.NancyHerkness.com.      Connect with the Author         Facebook  Twitter  Goodreads

Seven years ago, Max Varela was working on perfecting his design of protective body armor.  Jake, a military man, worked with Max, and he and his squad tested the armor.  During the process, Jake befriended Max, and often invited him home for dinner.  The two men had great respect for each other and became friends, unfortunately, Max found himself becoming deeply attracted to Emily, Jake’s wife.  Although it was painful, when their work together was done, Max moved his business to New York, and severed all contact with Jake and Emily.  In the intervening years, Max, has become extremely wealthy and successful.  He’s in the process of selling his company, moving to Chicago, and returning to his first love – research and inventing.  To say the least, he is shocked when Emily Wade bursts into his office.

In the three years since her husband was killed while on a mission, Emily has tried her best to build a good life for her daughter, Izzy.  She was lucky enough to inherit a house in New York, and has become director for a center in South Harlem which runs children’s programs.  An opportunity has come up for her to acquire an adjacent property for the center, which would allow them to expand to some wonderful new activities.  Unfortunately, all of her funding options have failed, and she’s down to the deadline.  She knows of Max’s success, and in desperation, Emily rushes past his assistant, and barges in to make a plea for her cause, based on their long ago friendship.

All of the old feelings come rushing back to Max as he invites Emily to sit and describe her situation.  He had not heard of Jake’s death, and feels bad about never even acknowledging it.  He makes no promises to Emily, other than agreeing to look into the possibility of helping her.  Yet, he rearranges his already full schedule in order to tour the center.  Though his intention was helping Emily personally, he’s also impressed with what she’s accomplished.  His very generous support overwhelms Emily, and she impulsively invites him to dinner, which then leads to an official first date.

Emily had a happy marriage, and she deeply grieved for her husband.  Now she’s ready to begin living again.  Years ago, she was fond of Max, though she never saw him as more than a friend, but now, things are different.  Max is such an endearing character.  He has acquired poise, confidence, and polish, but none of the arrogance you might expect to find in a billionaire CEO.  He treats Emily and her daughter with kindness and respect, and he’s overly generous with the center.  It also turns out that Max and Emily have an intensely hot chemistry together.  Their affair is progressing beautifully, until Max mentions his pending company sale and his move to Chicago.  Though Max has no intention of ending their relationship, (in fact, he’s committed to commuting back to New York every weekend) Emily refuses to even consider this, and ends things.

SECOND TO NONE is a short, but very powerful and emotional novella.  I love the person that Max was, and is now.  He always acted honorably, he’s generous, he’s kind, and his vulnerability for someone in such a powerful position is very touching.  I admire most of Emily’s traits – her dedication to her daughter and to the center.  I love that she was strong and ready to move on, yet I really hated her inflexibility in not even being willing to consider continuing her relationship with Max, though it would be a commuter relationship.  There are many tender and poignant moments in this well written story, and I thoroughly enjoyed the happy resolution in SECOND TO NONE.