Review – Someone to Wed by Mary Balogh 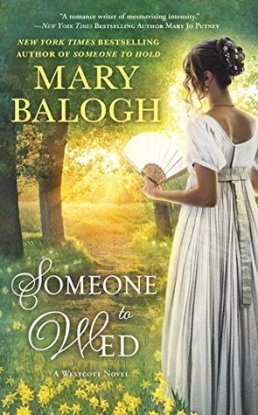 When Alexander Westcott becomes the new Earl of Riverdale, he inherits a title he never wanted and a failing country estate he can’t afford. But he fully intends to do everything in his power to undo years of neglect and give the people who depend on him a better life. . . .

A recluse for more than twenty years, Wren Heyden wants one thing out of life: marriage. With her vast fortune, she sets her sights on buying a husband. But when she makes the desperate—and oh-so-dashing—earl a startlingly unexpected proposal, Alex will only agree to a proper courtship, hoping for at least friendship and respect to develop between them. He is totally unprepared for the desire that overwhelms him when Wren finally lifts the veils that hide the secrets of her past. . . .

Alexander Westcott is now the Earl of Riverdale through a bizarre circumstance.  The previous earl, a cousin, was declared illegitimate when it was discovered that his father entered into a second marriage while his first wife was still alive.  Alex never expected, or wanted the title, and the estate is greatly in debt.  Alex had just spent years putting his own family estate on more solid financial footing, and now is overwhelmed with these additional responsibilities.  Alex knows he must at least consider marriage to an heiress, but he’s determined to at least marry someone he can respect and like, if not love.

Rowena “Wren” Heyden has inherited her uncle’s thriving business upon his death, and is now extremely wealthy.  She lived with her aunt and uncle since she was ten, almost twenty years.  Her aunt and uncle lavished love on her, and her life is now empty without them.  Half of Wren’s face is marred by a birthmark, and she has always stayed away from company, and wears a veil when she ventures out.  Her loneliness has made her long for a husband and children, but she feels the only way to obtain her dream is to “buy” a husband.  She compiles a list of gentlemen who she feels may be agreeable to her plan, and invites each to tea.

Alex arrives at Wren’s home, believing he is simply making the acquaintance of a neighbor.  When Wren decides that Alex is a definite possibility, she declares her true purpose.  Alex is shocked, and asks to see her face, which she had hidden behind her usual veil.  When Alex doesn’t run away in terror, they begin to discuss her plans.  Alex only agrees that they become better acquainted in order to see if they could possibly suit.  Thus begins an awkward series of meetings that leaves both of them with mixed feelings.  When Wren meets Alex’s mother and sister, she is stiff and unfriendly, leaving everyone uncomfortable.  She decides that she could never be a proper countess, and ends the relationship.  Wren felt a strong attraction to Alex, but also felt very inadequate.  Alex also had mixed feelings – at times he felt that he could like Wren, and at other times, he was repelled by what seemed to be her coldness.

As Alex goes back to town, he meets several young debutantes, and he finds them shallow and without substance.  He regrets that he allowed Wren to end their relationship before it really had a chance.  When he encounters Wren, also in town on business, he convinces her to let him call on her.  This time around, they are a little easier with each other.  They talk seriously of their plans and goals, and Alex comes to realize that he truly likes and wants to marry Wren.  He encourages her to slowly meet his family, one at a time, and to not hide behind her veil.

Alex is truly what dreams are made of – he’s honest, steadfast, kind, patient, and caring.  He’s protective of Wren, yet does his best to bring her out of her self- imposed shell.  He tries not to overwhelm her with his family members, yet slowly woos her.  Wren does become overwhelmed at times, but shows extreme courage.  Soon she starts to feel that Alex’s family is now her family, too.  Everyone is matter of fact about her face, and soon, they are no longer even noticing the imperfections.  Alex and Wren do marry, and find that they share a passionate chemistry that brings them even closer together.

The mystery of the first ten years of Wren’s life is finally revealed, and it’s a very sad story of a tragic childhood.  Alex stands by and supports Wren as she faces down old ghosts, and emerges even stronger.  SOMEONE TO WED is magnificently written.  As with all of Mary Balogh’s stories, the strength is in the characters, and their growth and development.  Skillful writing had me feeling all of Wren’s insecurity and loneliness, and Alex’s doubts and burdens.  I loved how Wren truly blossomed under Alex’s care, and how they were perfect for each other.  SOMEONE TO WED is full of heart and emotion, and is a beautiful story of a marriage of convenience that leads to a genuine and lasting love.  I recommend it most highly, and it is definitely one of my top favorites of this year.