Review – The Lady in Red by Kelly Bowen 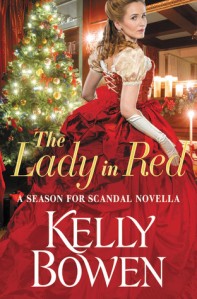 A lady with secrets, a man with a burning desire, a love that breaks all the rules

Lady Charlotte Beaumont has spent her whole life being ignored. By her parents, her brother, even the servants. So she was secretly able to develop her talent for painting well beyond the usual watercolors. Too bad no one will let her actually use it-women are rarely accepted into the Royal Academy. But when a connection at the Haverhall School for Young Ladies gets Charlotte her dream commission, she’ll do whatever it takes to make it work. Including disguising herself as “Charlie.”

Flynn Rutledge has something to prove. His lowly upbringing is not going to stop him from achieving his artistic dreams. This commission is the key to his future, and his partner, an unknown youth in oversized clothes who is barely old enough to shave, doesn’t exactly inspire confidence. But Charlie does inspire Flynn’s artistic passion-something he worried he might have lost forever. For all his street smarts, nothing can prepare Flynn for the shock of Charlie’s true identity. He doesn’t care that she’s a woman, but a lady of the ton is a different matter altogether . . .

Click on title below for direct Amazon buy link:
The Lady in Red (Kindle Single) (A Season for Scandal)

Lady Charlotte Beaumont is of no use to her father, the earl, or to her brothers.  She’s too tall, too broad shouldered, and not beautiful in any traditional sense.  She is regularly sent away to their country estate, chaperoned by an indifferent aunt.  Over the years, Charlotte has taken the art training she received as a child and has perfected her skills to become a truly formidable artist.  However, the world isn’t yet ready for a female artist to be accepted or successful.  In order to pursue her dream, and to get away from her indifferent family, Charlotte approaches a mysterious man, known as King, with a devil’s bargain.  King is a powerful force, one not to be trifled with, but he is willing to make a deal with Charlotte.  He will arrange that she is granted the remaining open spot on a prestigious project if she is willing to repay his request when he summons her.  Charlotte agrees, and is transformed into “Charlie” Beaumont, and sets off to obtain her dream.

Flynn Rutledge at first appears to be the poster child of a temperamental artist who is suffering with lack of inspiration.  He can’t believe that his partner in designing murals for this church project is an unknown young boy, who no one has heard of, and who looks like a mere teenager.  Charlie’s initial conversations are met with anger, sarcasm, and suspicion.  Flynn is suspicious, because he is assuming that Charlie knows of the great scandal in his past, and is only waiting for the opportune moment to  fling that information in Flynn’s face.  Flynn is a talented and dedicated artist, but his reputation took a serious hit when he became involved in an affair with a notorious widow.  Believing himself in love, he publicly proposed, and suffered the humiliation of being soundly rejected.  The widow’s friends declared that the son of a prostitute had no business trying to marry into their ranks.  While Flynn’s pride was greatly damaged, his heart wasn’t, but he developed an intense hatred for titled aristocrats.

Slowly, Charlie’s calm nature overcomes Flynn’s hostility.  Flynn sees Charlie’s genuine talent, and finds the inspiration that had been eluding him recently.  The two of them agree on the handling of the project and begin a comfortable and amicable working relationship, with mutual respect on both sides.  The status quo is interrupted when an attack on Charlie leaves her injured, and Flynn discovers her gender while rendering aid.

Surprisingly, Flynn doesn’t threaten to reveal Charlotte’s secret, or insist that she leave the project.  He does ask for her reasons, and he’s sympathetic to the plight of a woman with her talent who has no outlet for it.  The new facet to their relationship leads to a sizzling affair and a deepening of their bond of friendship.  Charlotte told Flynn all the facts about herself, except that she is a titled lady.  When their project is over, Flynn learns that Charlotte is an earl’s daughter, and feels betrayed and used all over again.  Will he be able to overcome his prejudice, or will he throw away the chance at a great love?

I am always leery of reading stories with characters masquerading  as the opposite gender, as I have a hard time believing they could be successful.  However, the description of Charlotte’s appearance made me believe she could pull off appearing as a youth, without making her appear to be ugly.  I love Flynn’s reaction to her, how he studied her, and found the loveliness in her.  I love that he made her feel beautiful and respected her talent as an artist and as an equal.  In turn, Charlotte is very good for Flynn.  She provided inspiration to him when he floundered, she made him think, and she provided him with a sense of self worth when the world scorned him.  I find it amazing that a woman who was valued so little by her own family  was able to become such a determined and caring person.  The romance between Flynn and Charlotte developed beautifully and their sexual chemistry is hot.  THE LADY IN RED is another amazing read from Kelly Bowen, and it concludes with a grand gesture of love from Charlotte which is pure perfection.