Review – The Viscount and the Vicar’s Daughter by Mimi Matthews 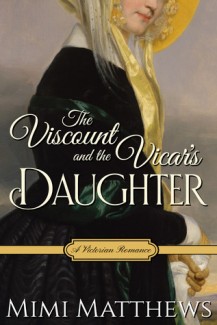 England, 1861. A world-weary rake and a prim vicar’s daughter are thrown together during a holiday house party. Will they discover there’s more to each other than meets the eye? Or will revelations from the past end their fragile romance before it begins?

A WORLD-WEARY RAKE
After years of unbridled debauchery, Tristan Sinclair, Viscount St. Ashton has hit proverbial rock bottom. Seeking to escape his melancholy, he takes refuge at one of Victorian society’s most notorious house parties. As the Christmas season approaches, he prepares to settle in for a month of heavy drinking…until an unexpected encounter changes his plans—and threatens his heart.

A PRIM VICAR’S DAUGHTER
Valentine March is not the drab little spinster she appears to be. When her new job as a lady’s companion lands her smack in the middle of Yorkshire with England’s most infamous rake, she resolves to keep her head down and her eyes fixed firmly on her future—a future which most definitely does not include a sinfully handsome viscount.

A MATCH MADE IN SCANDAL
A friendship is impossible. An affair out of the question. But when one reckless act binds them together, will two star-crossed souls discover there’s more to each other than meets the eye? Or will revelations from the past end their fragile romance before it begins?

Tristan Sinclair, Viscount St. Ashton, has discovered that his straitlaced father has followed him to a notorious house party, and has requested his immediate presence.  In order to put off the meeting, which is bound to be another lecture, as long as possible, Tristan takes a stroll through the woods.  As he is pondering his life, and wondering why he even attended this party, he hears a woman crying and is drawn to the heartbreaking sound.

Recently orphaned Valentine March had to seek employment upon her father’s death, and is now companion to Lady Brightwell.  She has sought solitude to cry out her anger and sorrow over the cruel actions of Lady Brightwell’s daughter.  The spoiled and temperamental young lady blatantly destroyed a series of drawings done by Valentine’s deceased mother.  The beautiful pictures and handwritten scripture were all that Valentine had left of the mother she never knew, and she is devastated.

Tristan immediately recognizes from Valentine’s attire that she is probably a companion.  Without revealing his identity, he warns her about the lewd activity that will occur during the house party, and urges her to be cautious.  After lending Valentine his handkerchief, he returns to the house to face his father.  The earl is very unhappy with his son and heir, Tristan, and the way he’s chosen to live his life for the last decade.  Little does he know, but the gambling and womanizing has all but lost its appeal for Tristan, who has mostly turned away from those pursuits.  The earl decides to stop paying his son’s bills, and requires that he make his own living from an estate he owns in the remote country.

During the party, which turns out to be very tame, thanks to the presence of the earl, Tristan finds that he is more entranced with Valentine every time they meet.  It seems that the notorious rake has finally succumbed to love, something he never thought possible.  When a shared kiss leads to their being compromised, Tristan dutifully proposes.  But his father, and fate, have other ideas.

As Tristan and Val try to determine what path their future should take, their respective families are all too eager to interfere.  Tristan truly wants to marry Val, and he is buoyed by the fact that she believes in him when no one else ever has.  Val also wants to marry Tristan, but not if it will destroy his future.  THE VISCOUNT AND THE VICAR’S DAUGHTER is a well written and romantic story of two lost souls who find love and redemption together though the odds seem stacked against them.                                          ~Rose