Review – A Duke in the Night by Kelly Bowen 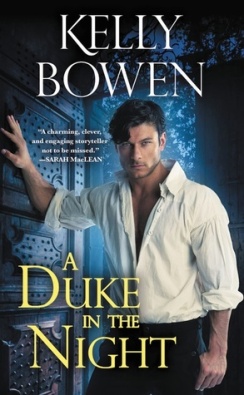 Duke. Scoundrel. Titan of business. August Faulkner is a man of many talents, not the least of which is enticing women into his bedchamber. He’s known—and reviled—for buying and selling companies, accumulating scads of money, and breaking hearts. It’s a reputation he wears like a badge of honor, and one he intends to keep.

Clara Hayward, the headmistress of the Haverhall School for Young Ladies, on the other hand, is above reproach. Yet when she’s reunited with August, all she can think of is the way she felt in his arms as they danced a scandalous waltz ten long years ago. Even though her head knows that he is only back in her life to take over her family’s business, her heart can’t help but open to the very duke who could destroy it for good.

Click on title below for direct Amazon buy link:
A Duke in the Night (The Devils of Dover)

Though August Faulkner, Duke of Holloway, is wealthy beyond belief, he is driven to acquire more – more companies, more properties, and more money.  He never expected to inherit his title.  In fact, as a youngster, his father was actually in debtors’ prison, and for a time he had to live on the streets.  He’s never forgotten how it felt to be starving and without a home.  So these days, no matter how much he has, it’s not enough to satisfy him.  One of his recent acquisitions, Haverhill School, leads him to believe that the Hayward Family, who sold it, may be in financial trouble.  When he learns their shipping company is on precarious ground, he decides to track down Baron Strathmore, the head of the family, to try to snap it up before someone else does.  Instead of the baron, he finds his sister, Clara, and his memories travel back to their one meeting.

Ten years ago, Clara Hayward was considered a bluestocking and a wallflower.  August’s friends dared him to dance with her, and though she heard their rude remarks, she accepted.  They shared an exhilarating waltz that affected them both greatly, yet they never saw each other again.  Until now.  Clara went on to become headmistress and owner of the elite Haverhill School, while August became a duke and a business mogul.  Clara was heartbroken to sell her school, which was a gift from her mother, but she made the sacrifice in hopes of keeping the family shipping business afloat.  She has no idea that August is the purchaser.  She’s now beginning her summer classes, which are different, and only for select ladies, one of them being Anne, who is August’s sister.

Clara is a lady very much ahead of her time.  The special summer classes she teaches allow young ladies to experience things they normally never would, like apprenticing in a chosen profession.   When Clara and August meet again, each remembers their one dance, while still feeling that powerful attraction that ten years hasn’t seemed to dim.  Since August intends to stay in the area, (both to keep an eye on his sister, and to try to further his chances of purchasing the shipping business) he and Clara run into each other regularly.  Without expectations of anything further, they begin a very passionate affair.

August initially appears to be a very traditional and chauvinistic man, as evidenced by his plans for his sister’s future and his reaction to discovering that Clara had (gasp!) been kissed before.  He has never been driven by emotions, just practicality, yet he finds himself feeling guilt over not revealing his ulterior motive and his purchase of the school to Clara.  Of course, when she finds out, she feels betrayed.  I wouldn’t describe August as being deliberately cruel, perhaps just wearing blinders.

I like Clara greatly.  I admire her risk taking, her forward thinking, her ability to listen to August’s reasoning, and her willingness to accept and forgive.  She showed strength and determination, while not discounting love.  August had to face some self truths about his plans for his sister’s life, as well as what he counted as important in his own life.  The man he evolves into is one who is more sensitive, more caring, and less rigid. He makes a lovely and heartwarming gesture to prove his love to Clara in a genuine fairytale-like and swoonworthy scene.  A DUKE IN THE NIGHT is another well written and compelling novel by Kelly Bowen, who has become a favorite of mine.  There’s plenty of steam, character development, romance, and very satisfying reading.