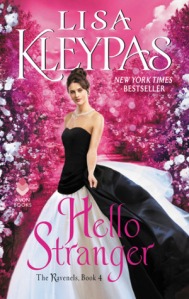 A woman who defies her time

Dr. Garrett Gibson, the only female physician in England, is as daring and independent as any man—why not take her pleasures like one? Yet she has never been tempted to embark on an affair, until now. Ethan Ransom, a former detective for Scotland Yard, is as gallant as he is secretive, a rumored assassin whose true loyalties are a mystery. For one exhilarating night, they give in to their potent attraction before becoming strangers again.

A man who breaks every rule

As a Ravenel by-blow spurned by his father, Ethan has little interest in polite society, yet he is captivated by the bold and beautiful Garrett. Despite their vow to resist each other after that sublime night, she is soon drawn into his most dangerous assignment yet. When the mission goes wrong, it will take all of Garrett’s skill and courage to save him. As they face the menace of a treacherous government plot, Ethan is willing to take any risk for the love of the most extraordinary woman he’s ever known.

Warning! Over twenty four hours after reading, I’m still suffering from extreme book hangover.  Formerly a detective, and now an agent for the crown, Ethan Ransom has been smitten with Dr. Garrett Gibson since he first saw her.  Though he doesn’t hold out any hope of ever having a relationship with her, he still follows her as she makes her way through the dangerous parts of town with the intention of protecting her, if needed.  Garrett, who is the only female doctor in England, is at first annoyed upon discovering Ethan trailing her.  When Ethan convinces her that she needs to learn how to protect herself, she is intrigued.  It doesn’t take very long until the doctor who has been all-work-and-no-play becomes just as smitten with Ethan.  When Garrett decides she wants Ethan for her lover, he tries, but he’s powerless to resist her.

Right from the start, I felt this couple to be perfect for each other.  Garrett has had to fight many battles just because she’s a woman in a man’s profession.  She’s had to be better, smarter, and tougher, and in doing that, she put aside all thoughts of romance.  Ethan has been trained to be an elite agent, controlling his thoughts, his actions, and his body.  But together, they both show a softness toward the other, sharing humor, passion, and themselves.  I adore a book where I am in love with both lead characters, and that is definitely the case here.  I love Ethan’s way of speaking to Garrett – it’s almost poetic, yet doesn’t seem contrived or phony, just truly heartfelt:  “The first moment I saw you, I knew you were my share of the world.  I’ve always loved you.  If I could choose my fate, I’d never be parted from you.”  Whew!

HELLO STRANGER has some intrigue and some history, but nothing overshadows the romance, and that’s something very important to me.  If you’ve followed the previous books in THE RAVENELS series, West plays a prominent secondary role, and adds some smileworthy moments.  Everything about HELLO STRANGER worked for me, and I’ve added it to my favorites list.  The characters are amazingly strong, yet vulnerable to each other, and they have a love and passion that’s extraordinary.  “I want a life with you.”  Years with him.  A fireside of children with him.  “My life is yours,” he said huskily.  “You own every minute I have left.  You know that..don’t you? ..”  The writing is beautiful, compelling, and heartfelt – if that’s the kind of book you love to read, (as I do) I recommend moving HELLO STRANGER to the top of your reading list.  ~Rose