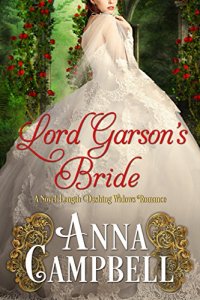 Hugh Rutherford, Lord Garson, loved and lost when his fiancée returned to the husband she’d believed drowned. In the three years since, Garson has come to loathe his notoriety as London’s most famous rejected suitor. It’s high time to find a bride, a level-headed, well-bred lady who will accept a loveless marriage and cause no trouble. Luckily he has just the candidate in mind.

A marriage of convenience…

When Lady Jane Norris receives an unexpected proposal from her childhood friend Lord Garson, marriage to the handsome baron rescues her from a grim future. At twenty-eight, Jane is on the shelf and under no illusions about her attractions. With her father’s death, she’s lost her home and faces life as an impecunious spinster. While she’s aware Garson will never love again, they have friendship and goodwill to build upon. What can possibly go wrong?

From the first, things don’t go to plan, not least because Garson soon finds himself in thrall to his surprisingly intriguing bride. A union grounded in duty veers toward obsession. And when the Dashing Widows take Jane in hand and transform her into the toast of London, Garson isn’t the only man to notice his wife’s beauty and charm. He’s known Jane all her life, but suddenly she’s a dazzling stranger. This isn’t the uncomplicated, pragmatic match he signed up for. When Jane defies the final taboo and asks for his love, her impossible demand threatens to blast this convenient marriage to oblivion.

Once the dust settles, will Lord Garson still be the man who can only love once?

Jane Norris is contemplating her future, as she’s about to leave her home for the last time.  Her father, the earl, has died, and his heir will soon be arriving to take up residence.  She’s surprised by a visit from childhood friend, Hugh Rutherford, who has an even more surprising purpose for his visit.  Hugh, Baron Garson, has decided that it’s time to marry and begin a family.  Three years ago, he was engaged to Morwenna Nash, only to have her husband, who was missing for years and believed dead, return on the very day of their engagement celebration.  Hugh was heartbroken, as he deeply loved (and still loves) Morwenna, but he accepts that he must move forward with his life.  Jane is a dear friend, and he proposes a convenient marriage – one in which there will be friendship, affection, and children, but never love.  Jane is shocked, but after considering her prospects, and how much she’d like children, she accepts Hugh’s proposal.

After their hasty marriage, there are a few rough days, as Jane is a bit skittish, as well as alarmed about the passion she feels.  Hugh reacts with the patience of a saint as he decides to woo his new wife and give her the courtship she never had.  His care is well rewarded as they fall into a relationship which includes good times, laughter, and friendship by day, and steamy times between the sheets at night.  The marriage is going in just the direction Hugh had hoped it would, and he’s well pleased as he takes his new bride to town to meet his friends and enter society.

At this point, I was certain that I was in for a typical marriage-of-convenience -turned-to-true-love story, (which is one I love to read, by the way) but author Anna Campbell had other ideas.  While Jane achieves success in society and is accepted by Hugh’s friends, she also realizes that she has fallen in love with her husband.  When she decides she has to let him know, Hugh is horrified that she has broken their agreement, and apologetically tells her that he can never return her feelings.  It’s not long before Jane decides she can’t live this way, and forces a separation.

I hated to see what became of the recently happy couple who are now living separate lives in separate residences.  Hugh remains steadfast in his love for Morwenna, yet he misses Jane greatly, and he won’t lie to her in order to get her back.  I liked Hugh from the beginning, and I admired his honesty in all his dealings with Jane.  His treatment of her was above reproach, and, to me, his only fault was being slow to realize that it’s possible to have more than one love in one’s life, and one love may be very different from another.  I felt my heart break for Jane, but I wish that she had stayed to fight, rather than run.

I have been hoping for a happy ever after for Hugh, ever since he suffered such a sad fate in CATCHING CAPTAIN NASH.  It does not come easily for him and Jane, as they both have fears to overcome, and some soul searching to do.  LORD GARSON’S BRIDE is a well written and passionate story that touched my heart and sent my emotions on a roller coaster ride.  I particularly recommend this book for fans of convenient marriages, and those who enjoy seeing a deserving character find out that love is lovelier the second time around.  ~Rose