Review – More or Less a Temptress by Anna Bradley 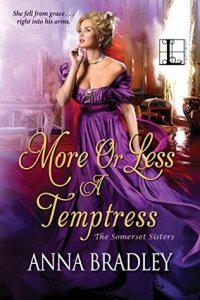 A beautiful debutante in Regency London seems destined to make a good match. But the Somerset sisters have made courtship and matrimony a deliciously scandalous affair . . .

Hyacinth Somerset’s debut is the most anticipated event of the season, as it will be the reclusive young lady’s first public appearance. But within moments of being asked to dance by a dashing stranger, Hyacinth calls him a murderer, then faints dead away! Now all the ton is a aflutter over Hyacinth’s baffling shun of their most intriguing newcomer—the wildly handsome Lachlan Ramsey . . .

Recently arrived from Scotland, Lachlan only wishes to claim his place in society to secure his sister’s future. When that is threatened by the accusations of a hapless slip of a girl, he will do anything protect his family. Yet it appears Hyacinth has only damaged her own hopes, inspiring the label of hysteric—and ultimately inspiring Lachlan to shelter her from harm. Now if only there were a defense for the surge of feeling he has every time Hyacinth turns her gaze his way. If only there were a way to make her his—while keeping the true secret in his past from destroying everything—and everyone—he cares about . . .

This has been the worst of times for Lachlan Ramsey.  He recently lost his father, and his mother is on her deathbed.  While protecting his sister, Isla, from a brutal attack, the incident turned tragic, causing him and his family to be ostracized in their home village.  If all this weren’t bad enough, his dying mother reveals an earth shattering truth to him, one that turns his world upside down.  Lachlan takes his younger siblings with him to begin a new life in England, leaving their beloved Scotland behind forever.  His brother, Ciaran, particularly resents him greatly, as he was forced to leave his love behind, as she now rejected him.  Ciaran’s drinking and bad temper causes the two brothers to brawl almost every day.  To an outsider, it looks as if they are intent on murdering each other, and that’s exactly what a shocked young lady believes she is seeing.

When Hyacinth Somerset escapes the stifling room she’s sharing with her grandmother for a much needed breath of fresh air, she is petrified to see two large men pummeling each other behind the inn.  When one of the men drags the other off, she’s sure that she’s witnessed a murder.  Too traumatized to tell anyone what she’s seen, she continues on her journey with her grandmother.  To her utter shock, she encounters the same man at a ball, where she publicly calls him a murderer and faints dead away.

Lachlan had entered the ballroom of his newly discovered brother, Phineas, the Marquess of Huntington.  Before he had a chance to approach his brother and request an audience, he is taken aback by Hyacinth’s beauty, which seems to stand out among all the other lovely English roses.  As he approaches her, she makes her shocking proclamation, and chaos ensues.  Eventually, as the situation is sorted out, Hyacinth realizes her mistake.  Not only that, but Iris, Hyacinth’s sister is married to Phineas, Lachlan’s brother, making them extended family. (sort of)

Hyacinth is a very timid, fearful, anxious person.  She has always been wrapped in cotton by her family, who insists on protecting her from any unpleasant situation.  She has been of a mixed mind about her debut season, desiring it as almost every young lady does, yet dreading the social situations, where she tends to hide behind columns and avoid dancing.  Lachlan is burdened by a secret he’s carrying, as well as the unhappiness he’s caused his family.  His demeanor appears fierce and unfriendly, while his size makes him an imposing figure.

Phineas accepts his new family, and tries to find a way to get society to welcome them.  He also wants Hyacinth to be forgiven for her outburst and accusations at the ball, and to continue with her season.  Surprisingly, it is Lachlan who sees the hidden strength and wit inside Hyacinth, something everyone else is blind to.  As she fumbles through the season, enduring snubs, cruel jokes, and insults, it’s Lachlan who is her greatest champion.  He’s the one who convinces her she has the strength to stay when her family would like to give it up and leave town.

When Hyacinth made a scene at the ball, I honestly felt that there was no way I was going to like her, as my first impression was that she was immature and somewhat ridiculous.  My opinion changed almost immediately as I got to know her, and I began to understand her fears.  I could also see that she truly did have a beautiful heart, and a courageous spirit that she just had to bring forward.  Lachlan is just the kind of hero I adore – big, strong, gruff exterior, tortured, and he fell so, so hard for Hyacinth.

MORE OR LESS A TEMPTRESS is not only a passionate and tender romance, but a wonderful story of a fearful young lady finding her balance, and a devastated man finding forgiveness and a new home.  I love Lachlan’s and Hyacinth’s journey to finding genuine love with each other.  Hyacinth’s siblings are such dynamic characters, that I hope their stories are forthcoming.  Anna Bradley’s writing just gets better with each book, and this whole Somerset Sisters series has been outstanding.    ~Rose