Review – The Monster of Montvale Hall by Nadine Millard 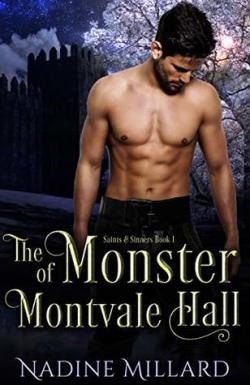 A childhood tragedy had shaped the life of Robert Forsythe, the Duke of Montvale Hall, forever.

He kept himself isolated from the world and the people in it, reveling in his reputation as a monster.

Locked in a world of guilt and grief, nobody had ever been able to break down the walls he kept around him. Nobody had ever tried.

And if being a monster kept everyone away, then a monster he would be.

Abigail Langton was as headstrong as she was mischievous, so it was no surprise that she wasn’t exactly welcomed at Montvale Hall with open arms.

It didn’t take her long to understand why its owner was called a monster.

It took even less time to realize that monster or not, Abigail’s heart called to him in a way she couldn’t deny or understand.

Robert’s world is turned upside down and inside out by the irrepressible Abigail. And try as he might to avoid it, he finds himself drawn to her in ways he doesn’t want. In ways that scare the wits out of him.

Will Robert give in to the temptation that is Abigail? And will Abigail find the heart of the man beneath the monster?

When fourteen year old Robert Forsythe is home from school, running free with his three best friends, the last thing he wants is his baby sister following behind.  But young Gina will not be deterred, and doggedly continues to tag along.  Finally, Robert is worn down, and agrees to let Gina accompany them.  A tragic accident results in Gina’s death, and Robert’s life is changed forever.  Robert finishes school, but withdraws from society, living in seclusion, and wallowing in misplaced guilt.  Though his friends, particularly James, have stood by him, and tried to help him, he becomes a recluse, before long being dubbed a monster.

Robert’s steadfast friend, James, sends word that he will be visiting, and has a favor to ask.  When James arrives, he has a lovely young woman with him, his American cousin, Abigail Langton.  Abby wishes to have a London season, and James is hopeful that Robert’s mother will agree to sponsor her.  Robert is angry to have his privacy invaded, and is even angrier at his reaction to Abby.  He doesn’t want to feel any attraction or emotion, yet when he sees his mother come alive at the prospect of a season in town, he can’t refuse her.  Abby is now installed at their home for several weeks while they prepare, and Robert is unfortunately committed to accompanying his mother to town.

Robert may have to endure Abby’s company, but he doesn’t have to like it – or be polite to her.  He rebuffs her every overture of friendliness, and constantly hurts her feelings.  Though Robert has carried the guilt of his sister’s death for years, he comes off as angry and surly rather than sad.  Even though I felt for him after the heartbreaking incident years ago, I also wanted to shake him because of the cruel man he’s become.

Abby has a big heart, but she comes across as very young.  She actually shows a lot of courage by continually making attempts to get behind Robert’s walls, though time and again he rebuffs her, even going so far as to berate her for bringing flowers into his home.  She has a tendency to say silly things, or the wrong thing, or to do the wrong thing.

Yet, somehow, Abby’s sunny demeanor works its way under Robert’s skin.  He begins to find himself almost smiling at some of the ridiculous things she says.  Soon, he can’t help himself, and begins stealing kisses.  Still, it’s going to take another near tragedy for Robert to see what’s right under his nose, and some serious soul searching for him to find self-forgiveness.  THE MONSTER OF MONTVALE HALL is a story of finally letting go of undeserved guilt, learning to move on, and the healing power of love.   ~Rose