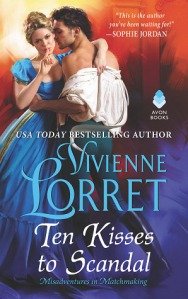 The Bourne Matrimonial Agency has one rule—never fall in love with the client. However, they never said anything about kissing a rake…

Briar Bourne’s matchmaking career could be summed up in two words—comic disaster. Unless she can learn about the irresistible forces that draw men and women together, her professional future looks rather bleak. But Briar has an intriguing plan—enlisting London’s most irredeemable rake to teach her everything he knows about attraction. Given his notorious reputation, it’s no surprise that Nicholas Blacklowe, the Earl of Edgemont, requests one thing in exchange for his tutelage. For every lesson, he wants a kiss in return. And what harm could there be in a simple kiss? After all, Briar would never fall for a scoundrel…

Nicholas has no romantic notions about love, and no intention of changing his ways. He’s only helping Briar so that she can find the perfect bride for his jilted cousin. Yet Briar is so clever, so curious, so candid—so blasted tempting—that soon, Nicholas can’t stop wondering what it might be like if he was irresistible to her.

Briar Bourne is the youngest of a trio of sisters who operate the Bourne Matrimonial Agency with their Uncle Ernest.  She is tired of being given the menial tasks of serving tea and filing, and longs to have some real clients of her own.  Her impulsive actions sometimes cause blunders to be made, which, in turn, causes the Agency to be subject to ridicule on occasion.  Her best friend, Temperance, is cousin to a notorious rake and bachelor, Nicholas, the Earl of Edgemont.  Briar and Nicholas have actually had a previous memorable meeting, one which showed how impetuous Briar can truly be.

Nicholas is charmed by the very young lady, (she is only twenty to his thirty four) but he can see that she has a lot to learn about relationships, life, and attraction.  Nicholas makes a bargain with Briar to impart a pertinent fact in exchange for a kiss, with one unbreakable rule – no one falls in love.  The kisses were meant to be playful and amusing, but soon become passionate beyond anything either of them expected.

I loved the relationship between Nicholas and Briar right from the beginning.  She teases him about his large nose, his “advanced” age, and his scandalous reputation, while he teases about her inexperience and optimism.  Surprisingly, a beautiful friendship develops, one where Nicholas indulges Briar’s unending curiosity and thirst for adventure, while she confides her family story, and innocently tells him how his kisses and caresses affect her.

Nicholas actually was married briefly when he was very young, and the painful and humiliating experience is what formed the man he is today, a rake with no intention of ever marrying again.  Yet, Briar has awakened long dead feelings in him, and as their passion grows stronger, Nicholas does the only thing he feels he can do – he runs.  That is, until rumor reaches him that Briar is about to become engaged – then he runs again, but this time, it’s to her side.

Their reunion is hot and steamy, and Nicholas realizes that he’s about to kiss his bachelor ways goodbye, but another secret he’s been keeping, one that involves something Briar can never condone, causes Briar to reject him and return to town.

Though she showed her youth by many of her impulsive actions, I really like Briar, particularly her honesty with Nicholas.  It did seem out of character for her to leave Nicholas without hearing his explanation.  It broke my heart to see Nicholas finally succumb to love only to have it thrown back in his face.  He was not nearly as wicked as his reputation made him out to be.  He did have standards, both about women and his family, whom he loved dearly.

TEN KISSES TO SCANDAL concludes with an epilogue, one of my very favorite things, especially when well written, and this one was.  The happy ever after is very satisfying, and Nicholas shows a romantic side to his nature that is swoonworthy.  If you enjoy a charming and steamy romance, with many delightful moments, I believe you’ll love TEN KISSES TO SCANDAL, which works perfectly as a standalone, though part of the Misadventures in Matchmaking series.