Review – The Governess by Christi Caldwell 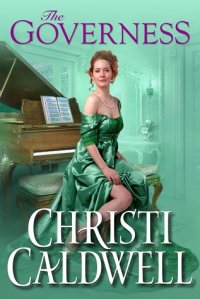 Regina (Reggie) Spark has loved Broderick Killoran, the resourceful and protective proprietor of the Devil’s Den, ever since he saved her from the streets and made her his right hand at the notorious gaming hell. For just as long, Reggie has never admitted her true feelings for him. Nor has she revealed her spirited ambitions—to buck convention and expectations and open a music hall.

While Broderick built his gaming empire with ruthless cunning, his loyalty to his employees is boundless. So when he learns of Reggie’s plan to leave his side and take charge of her own future, the betrayal cuts Broderick to the core. He responds as he would to any business rival…with swift retribution.

Instead of wilting, the savvy Reggie rebounds with a fury that shocks Broderick and stirs a desire he’s been holding in reserve for only ladies of nobility. But as their seductive battle of wills ignites under the harsh spotlight of the London Season, secrets are exposed as well—ones that could be ruinous in decent society but invaluable for the heart.

Regina Marlow is the daughter of a baronet, but due to strained family finances, she took a job as governess to the daughter of a duke.  Regina was very young and inexperienced, and fell prey to her charge’s older brother, who took her innocence, and gave her promises of marriage.  What followed was not a wedding, but abuse and shame.  Regina left society and her family for London’s streets, where she was rescued by Broderick Killoran.  “Reggie,” as Broderick calls her, changed her last name and began working for Broderick at his gaming hell, where she soon became indispensable as his assistant.

Broderick has spent years building up his club, Devil’s Den, while protecting his adopted siblings.  He is in some serious trouble, as it turns out his younger “brother,” Stephen, is not an orphan, as he assumed, but is actually the kidnapped son of a nobleman.  That marques is now toying with Broderick, letting him know that everything he owns will be destroyed, and he will be hanged.  Broderick realizes he doesn’t have a prayer, and begins trying to put his life in order, and to see that his remaining unwed sister finds a powerful match, one who will be able to protect her when he is gone.

It’s been ten years since Reggie came to Devil’s Den, and almost from the first, she fell in love with Broderick, who has always treated her with respect, and as a friend.  Knowing that Broderick will never love her, Reggie decides it’s time to make a change.  She has managed to save up a good amount of money, and plans to open up a music hall with a partner, another woman from Devil’s Den.  Unfortunately, Broderick learns of her plans, and is enraged and feeling betrayed.  When he confronts Reggie, he’s surprised that she stands up to him, unlike the complacent woman he’s known over the past decade.  He finds the change strangely arousing, and the mild desire he felt for her before and kept hidden, suddenly is blazing brightly.

Broderick is a hard man, who has both good and bad characteristics.  His childhood was privileged, growing up in a noble household, until his own father fell from grace.  That left Broderick with a fascination for, and a great desire to be accepted by society.  He has gone to extremes to protect his business interests and his adopted family.  Now with his own life in jeopardy, his thoughts are to be sure his family and his employees are safe.  I love Broderick’s strength and determination, and his ability to change and grow.

Reggie has carried guilt and shame for years, wrongly taking the blame for her past instead of accepting that her first lover was the one at fault.  She doesn’t see her own loveliness and desirability, never having the courage to give Broderick any inkling of how she felt.  Once she decided to take charge of her life, she became a force to be reckoned with.

The beginning of THE GOVERNESS jumps right into the story and characters who appeared in books one and two of the WICKED WALLFLOWER series, which I have not yet read, and for a very short time I did feel a little bit at sea.  It wasn’t long at all before I was able to easily catch up with everyone and their relationships, and the story took off, with never a dull moment.  THE GOVERNESS is an absolutely wonderful story which has plenty of heat, emotion, drama, and a breathtaking romance.  Author Christi Caldwell somehow managed to write a way for Broderick and Reggie to find their forever love, while finding a resolution for a situation that seemed to have no possible solution.  THE GOVERNESS is well written, well paced, captivating, and I most highly recommend it.     ~Rose