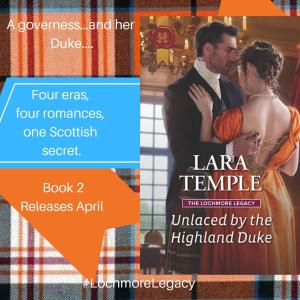 In bed with the duke!

Part of The Lochmore Legacy: a Scottish castle through the ages! Unceremoniously packed off to Scotland to care for the Duke of Lochmore’s young son, practical widow Joane Langdale fears she will be ignored as always. But the deep connection and heated passion that develops between her and Benneit is far more dangerous! When Benneit is expected to propose to another, how dare Jo dream of becoming his duchess? 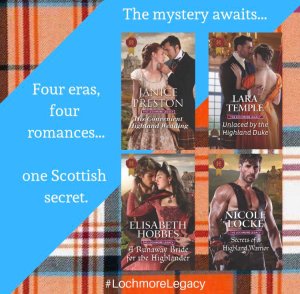 The LOCHMORE LEGACY is an interesting series of four books, each taking place in a different era, but involving the same mystery.  Rather uniquely, the stories start in the Victorian era, and each book goes backward in time, and reveals another piece of the puzzle.  Book One, HIS CONVENIENT HIGHLAND WEDDING by Janice Preston is Flora and Lachlan’s story, taking place in 1848.  This Book Two, Joane and Benneit’s story, takes place in 1815.  Each book will give its couple their happily-ever-after, while shedding a little more light on the mystery until all is revealed in Book 4.

Benneit, Duke of Lochmore, is being plagued yet again by his deceased wife’s family.  They are determined to take over the care of his young son, Jamie, or, at the very least, enroll him into an English school where they can keep an eye on him.  When Benneit won’t budge, the family wears him down sufficiently to convince him to allow Joane Langdale, to act as companion to Jamie until such time as Benneit marries again.  Since Benneit has begun the process of becoming betrothed to Tessa McCrieff, he feels he won’t have to endure Joane’s company for long.  The potential marriage will have many benefits, including healing the long standing feud between the two families, and gaining McCrieff support for his distillery.

Joane “Jo” Langdale is cousin to Bella, Benneit’s late wife.  She has been widowed for two years, and has always seemed to be at the mercy of her demanding family.  Caring for young Jamie won’t be a hardship, though, as she loves children.  Quite frankly, she will enjoy the time in Scotland, away from her family.  When Benneit was courting Bella six years ago, he was courteous to Jo, but there was always an awkwardness between them.  Benneit felt sorry for her, but really never gave her a second thought after his marriage.

Now Benneit sees the ease Jo has in dealing with Jamie, who is enchanted with Jo’s magical stories and imagination.  He notices how she has confidence and intelligence, which she managed to hide under her demure appearance and downcast eyes.  Much to his dismay, Benneit also notices Jo’s understated loveliness, and the depths and beauty of her otherworldly eyes.

As Jo and Jamie grow close, and Jo seems to fit right in to their household, Benneit begins to see what it would be like if they were a family.  His desire for Jo is constantly growing stronger, and he’s able to tell that Jo feels the same.  What can he do?  While he is not yet formally engaged, his backing out would cause shame for Tessa McCrieff, and would cause more trouble with her father.  Without McCrieff’s backing, Jamie’s future will not be secure, and that’s something Benneit will not allow, regardless of the cost to himself.

Benneit’s fierce love for his son, his protectiveness, and his hidden vulnerability make him a hero to admire.  Though he has the occasional bit of ducal arrogance and temper, his compassion and generosity, along with the steam he generates with Jo caused him to be genuinely swoonworthy.  While initially Jo would appear no match for this powerful duke, she has reserves of strength and passion, which, along with her love for Jamie, makes them perfect for each other.

UNLACED BY THE HIGHLAND DUKE is a warm and passionate story, which, seemingly, has no chance of a happy ending.  I really appreciate the very romantic side of Benneit, and his determination to find a way to make things work.  It was also refreshing to see that all the members of the McCrieff family were not monsters.  The flow of Book One, HIS CONVENIENT HIGHLAND WEDDING, into this book worked extremely well. I recalled that Jo played a significant part in that story, and I felt compelled to revisit it so that I could see how the beloved characters from this book fared thirty plus years into the future.  THE LOCHMORE LEGACY series has been stellar for Books One and Two, and I eagerly anticipate the upcoming installments.  I highly recommend this well written and emotional romance, as well as the fascinating series it’s part of.