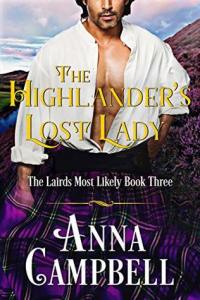 A Highlander as brave and strong as a knight of old…

When Diarmid Mactavish, Laird of Invertavey, discovers a mysterious woman washed up on his land after a wild storm, he takes her in and tries to find her family. But even as forbidden dreams of sensual fulfillment torment him, he’s convinced that this beautiful lassie isn’t what she seems. And if there’s one thing Diarmid despises, it’s a liar.

A mother willing to do anything to save her daughter…

Widow Fiona Grant has risked everything to break free of her clan and rescue her adolescent daughter from a forced marriage. But before her quest has barely begun, disaster strikes. She escapes her brutish kinsmen, only to be shipwrecked on Mactavish territory where she falls into her enemies’ hands. For centuries, a murderous feud has raged between the Mactavishes and the Grants, so how can she trust her darkly handsome host?

Now a twisted Highland road leads to danger and passion…and irresistible love. But is love strong enough to banish the past’s long shadows and offer these wary allies all that their hearts desire?

Diarmid Mactavish, Laird Intertavey is a man determined to avoid love.  He saw firsthand how his mother’s continual cheating destroyed his father, and he wants no part of that kind of heartache. As he’s walking along the beach one day, he discovers two bodies washed ashore, obviously victims of a shipwreck.  To his surprise, the woman has somehow survived the frigid night and is clinging to life.  He carries her off to his home, hoping she’ll be able to beat the odds and live.

When Fiona Grant regains consciousness, and realizes that she has been taken in by her family’s long time enemy, she feigns amnesia.  Determined to regain her strength and return to her quest as soon as she is physically able, Fiona continues her deception, though Diarmid has his doubts.  Fiona fled an abusive domestic situation, with plans to find her daughter, who had been taken from her, and run to somewhere safe, perhaps even America.

Diarmid is aware that Fiona is hiding something and is not being truthful.  Still, he is drawn to her in a way totally foreign to him.  As she heals, he can now tell that she’s beautiful, but it’s more than her physical charm that calls to him.  Though Diarmid and his household have been only courteous and kind to Fiona, she knows she can’t trust anyone, particularly a man.  She knows how deceitful and brutal they can be.  Fiona formulates her plan for leaving, when two members of the Grant clan come calling.  Brothers Allan and Thomas Grant have followed Fiona’s trail, and have come to claim Thomas’s runaway wife.  Diarmid has no authority to hold Fiona from her family, so the brothers immediately take her away.

Diarmid is crushed to learn that Fiona is married, yet something else about the situation just doesn’t feel right.  Despite common sense telling him that he shouldn’t interfere, he decides to follow the trio, and determine if Fiona is actually in any kind of danger.  He finds Fiona has been locked up while the brothers are having a meal, and he frees her and they make a hasty escape.  Once they’re far enough away from the Grant brothers, it’s time to have a serious conversation about Fiona’s situation.

When Fiona’s parents died, she was forced to marry, not Thomas, but Ian Grant, another brother, who is now deceased.  She was only fifteen at the time, and had a child, Christina, when she was sixteen.  She suffered years of abuse and learned to fear and despise the touch of a man.  When Ian died, her daughter was sent away to a foster family.  Now the Grants plan to force Fiona to marry Thomas by using her daughter as a tool.  They also have nefarious plans for Christina as soon as she turns twelve.  Fiona realizes that she trusts Diarmid to help her retrieve her daughter and to keep them both safe from the Grants.  Fiona has experienced enough to know that Diarmid desires her, and though she loathes sexual intimacy, she tries to repay Diarmid for his aid in the only way she knows how.  Though Diarmid is burning for Fiona, he also sees the reason she offers herself to him, and refuses as kindly as he can.  Fiona is confused that a man who so obviously wants her would refuse her.  She’s torn between feeling relief that she was rejected, and anger that she has no way to repay Diarmid.  She slowly comes to see just how honorable a man Diarmid is, and the lengths he’ll go to in order to protect her.

Diarmid begins to investigate the legal possibilities of Fiona’s situation, and determines that she would be in a much more favorable position if she were married.  He proposes a marriage of convenience, swearing that he would never expect a physical relationship.  Fiona is horrified at the thought of marrying again, even knowing the type of man Diarmid is, and flatly refuses.  Eventually, she is worn down, and desperate enough to accept his proposal, willing to sacrifice anything to have Christina back with her, and to be in a position where she doesn’t have to hide.

How I love Diarmid!  He’s truly a hero who’s willing to sacrifice his all for the woman he’s come to love.  Even through his own pain of knowing that he’ll never have Fiona’s love, or even the comfort of her body, he treats her with care and respect.  Fiona struggles to be a good wife and to overcome the wounds that years of abuse have left on her soul.  THE HIGHLANDER’S LOST LADY takes the reader on a journey through danger and betrayal, then finally, and satisfyingly, to trust, healing, passion, and ultimately – love.    ~Rose