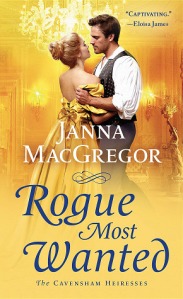 SHE NEEDS TO MARRY SOMEONE

Lady Theodora Worth needs to marry fast in order to keep her estate. It’s been her heart and home for years, and she’ll not lose it to anyone. There’s just one problem—as a woman who was raised in isolation by her grandfather, she’s completely incapable of pouring a cup of tea, never mind wooing a man. She’ll need a little matchmaking help from her sprightly next-door neighbor in order to find a convenient husband…

IT’S JUST NOT GOING TO BE HIM

Lord William Cavensham’s heart was broken years ago, and since that day he vowed to never love again. But his spirited Great Aunt Stella is determined he’ll marry or not inherit a single penny from her. And she’s got just the woman in mind—her beautiful and completely hapless next-door neighbor, Thea…

Thea and Will agree there’s no sense in marrying each other. Will wholeheartedly believes he’s incapable of love, and Thea refuses to marry the first man she’s practically met. But Will may be the rogue Thea wants the most after all…

William Cavensham is the second son of a duke, and is far from being a rogue.  A decade ago, while just nineteen, Will came to call on the father of the young lady who promised to marry him, only to learn from the gentleman that his love was about to marry a marquess.  When Avalon, the fickle young woman confirmed this, Will’s young heart was broken.  The rejection affected him deeply, and since then he’s thrown himself into becoming invaluable to his father and brother in managing their estates, all the while avoiding the parts of society that would throw him into the path of marriage minded ladies.  He is summoned to his beloved Aunt Stella’s estate in Northumberland on the pretext of her needing his help urgently, only to find that she intends him to marry her neighbor.

Theodora “Thea” Worth has spent the last seven years caring for her grandfather, the duke, who has steadily been declining into senility.  She has taken on managing his estates, as well as those under the earldom of Eanruig, a title which will pass to her upon his death, as it’s a Scottish title which can be inherited by a female.  When the duke finally passes, his heir, her cousin, claims the earldom for his own as well, claiming that it’s an English title, as opposed to Scottish, therefore belonging to him.  The original documentation has been lost, and Thea will have to prove that her claim is legitimate in an English courtroom before she can claim her title.  Her lawyer has advised her to marry, or at the very least, become engaged, in order to project a more stable appearance to the conservative English court.

When Will learns that his aunt intends him to marry Thea, her neighbor, he flatly refuses.  Though he’s sympathetic to her circumstances, he has no intention to wed.  He’ll meet with her, but only to make it clear that he’s not the man she’s looking for.  Before Will can begin to state his reasons, Thea abruptly tells him she won’t marry him.  Though surprised, and no doubt feeling a sting of rejection, Will is relieved, and listens to Thea’s story.  Thea’s sheltered life has kept her from society, and all of the games that people play.  She’s honest and forthright, sometimes painfully so, but Will is impressed enough to want to help her.  He invites her to stay at his home while she prepares to battle for her title.  He vows to help her, and pledges his family’s support in aiding her to learn all the social niceties necessary.

Will’s family is loving and accepting of Thea, all the while hoping that the couple will fall in love.  It seems obvious to everyone BUT them that they are perfect for each other.  Will and Thea are oblivious as to how much they seek each other out, gaze at each other, and are at ease and comfortable with each other.  Any mention of marriage between them sets off alarm bells in them, and causes them to step back.  Their attraction, however, can’t be denied, and they soon enter into a pretend engagement.  They are well on their way to love and a real and passionate marriage, when circumstances change, and Thea makes a heartbreaking choice.

I confess to having very mixed feelings about ROGUE MOST WANTED.  Will is a stellar character, one I loved right from the start.  He is upright, honest, hardworking, and very vulnerable and sensitive due to his young heartbreak.  I adored his family, and the love among all of the members was beautiful, sometimes even tearful.  I admired Thea, how hard she worked, how she loved her land and people.  I felt sad for her loneliness and alienation as she cared for her dying grandfather.  Yet, her decision at the book’s final conflict made me despise her.  Without spoilers, I feel that she did have options, and her choice indicated what was most important to her, and that’s something that Will would always remember.  I’ve noticed that Janna MacGregor has a very skillful way of writing, one that leaves me feeling conflicted sometimes, but nonetheless, always captivated and emotionally invested in her books.  ROGUE MOST WANTED had those characteristics, as well as taking me on a rollercoaster ride of emotions.    ~Rose