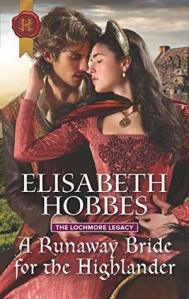 Lost in the Highlands

Found by the laird!

Part of The Lochmore Legacy: a Scottish castle through the ages! Far from her home in France, Marguerite Vallon escapes her arranged marriage to a man she despises. Stowing away in a stranger’s cart, she finds herself headed deep into the Highlands with Ewan Lochmore, the new Earl of Glenarris! Ewan vows to protect her. But maybe the freedom Marguerite has been searching for can be found with this rugged warrior…

The LOCHMORE LEGACY is an interesting series of four books, each taking place in a different era, but involving the same mystery.  Rather uniquely, the stories start in the Victorian era, and each book goes backward in time, and reveals another piece of the puzzle.  Book One, HIS CONVENIENT HIGHLAND WEDDING by Janice Preston is Flora and Lachlan’s story, taking place in 1848.  Book Two, UNLACED BY THE HIGHLAND DUKE by Lara Temple, is Joane and Benneit’s story, and takes place in 1815. This Book Three, A RUNAWAY BRIDE FOR THE HIGHLANDER by Elisabeth Hobbes takes place in 1513, and is Marguerite and Ewan’s story.   Each book will give its couple their happily-ever-after, while shedding a little more light on the mystery until all is revealed in Book 4, SECRETS OF A HIGHLAND WARRIOR by Nicole Locke.

Ewan Lochmore had been happily studying law in Glasgow, when he received word that his father and brother have been killed in battle.  Though he doesn’t want the title, Ewan is now Earl Glenarris, and sets off to officially claim his title and lands.  Ewan encounters Duncan McCrieff, member of the clan that the Lochmores have been feuding with, and finds that he is betrothed to a lovely young lady who appears none too thrilled with the engagement.

Marguerite Vallon is still mourning the death of her beloved mother, and has been betrothed by her father to a stranger.  She’s been forced to leave her home in France and sent to Scotland, which she hates, to marry Duncan McCrieff, a man who makes her skin crawl.  As her wedding draws ever closer, Marguerite knows that she has to escape.  When Ewan completes his business and packs up to return to his home, she secretly stows away in his wagon.

Ewan heads for his home, feeling sorry for the young lady who’s about to marry Duncan, but determined not to stir up trouble with the McCrieffs.  Ewan is having his own doubts about his suitability for being earl and clan leader.  Will his people accept him?  Is he capable?  As he continues his journey, he discovers his unwanted passenger, and is initially angry about the position she’s placed him in.  He wants to take her back to her fiancé, but changes his mind when Marguerite’s pleas win him over.

It’s clear that Marguerite can’t go to the coast in order to return to France, as she had planned, because that’s the first place Duncan will look for her.  Ewan decides to let her have sanctuary in his home, Lochmore Castle, until such time as it’s safe for her to return to her home.  What Ewan and Marguerite don’t count on is their growing attraction as they spend days traveling together.  They also share the bond of grieving for lost loved ones, which brings them even closer.  As they travel, Ewan points out all the beauty of Scotland, opening Marguerite’s eyes to the magnificence of his homeland.

A RUNAWAY BRIDE FOR THE HIGHLANDER is not only a warm and slow building romance, but also reveals another piece of the mystery which has tantalized readers through the first two books in this series.  As expected, there is bound to be a confrontation with Duncan McCrieff over Marguerite, but also another unexpected encounter, one that will test the new Earl Glenarris and determine his worthiness to rule the Lochmore clan.    ~Rose