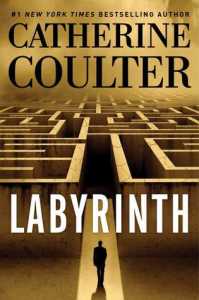 The #1 New York Times bestselling FBI Thriller series returns with another tour de force in which Agent Sherlock risks losing her career—and her sanity—over a case that is more complicated and twisted than any she’s ever encountered.

On a dark night, Agent Sherlock is driving along circuitous mountain roads in West Virginia when her car is suddenly T-boned at an intersection. As her car spins out of control, a man’s body slams against her windshield and then—blackness. When she finally comes to, Sherlock has no memory of the accident, nor of the moments that led right up to it. But what she does know is that the man she hit is a local CIA analyst…and now he’s missing.

Meanwhile, in the small town of Gaffer’s Ridge, Virginia, Special Agent Griffin Hammersmith has just rescued a kidnapped woman who claims her captor admitted to the murder of three teenage girls. However, the man she accuses is related to the local sheriff and a member of a very powerful family. Special Agent Hammersmith reaches out to Sherlock for help, and they soon realize that the disappearance of the CIA analyst is actually connected to the string of murders. But how?

Lacey Sherlock, FBI agent, has been in a serious car accident.  Luckily, she survived with only bruises and a concussion, but as she regains consciousness, it seems she has lost her memory.  Her husband, and partner FBI agent, Dillon Savich, races to her side.  Their marriage is solid and passionate, and they are a true team, so it’s heartbreaking to observe Savich’s pain over Sherlock’s total lack of recognition of him, their son, and their life together.

In the chaos of Sherlock’s accident, a man was thrown against her windshield and injured.  The man manages to run away from the scene and seems to have disappeared into thin air.  Through all the surveillance cameras and bystander’s videos, it’s determined that the man, Justice, works for the CIA.  His disappearance opens up a whole new investigation, and a plot of treachery that would shake up security as the world knows it.  Savich is thrown into the investigation, keeping Sherlock by his side, hoping that her lost memories soon return.

As is often the case in one of the FBI thrillers, there are multiple cases happening simultaneously.  FBI agent Griffin is vacationing in Virginia, when he receives a message from a woman in danger.  Carson is a journalist in town to do an interview, when she is kidnapped by a man she heard talking about a young lady, one of three who has recently disappeared.  When Griffin rescues Carson, and calls the sheriff, he’s shocked to find that he and Carson are the ones being thrown into jail.  The sheriff is the stereotype of the small town sheriff, overweight, blustering, and full of his own self importance.  The kidnapper also just happens to be his nephew.  The sheriff totally disregards Griffin’s FBI credentials, but he’s in for a rude awakening when the cavalry arrives.  FBI agents in full gear arrive with massive weapons in hand, and put the buffoon in his place.

Both investigations continue, with Savich and Sherlock being involved in both cases.  The story is intriguing, with plenty of action and twists, not to mention some incredible paranormal activity by way of psychic powers.  The kidnapping case takes a decidedly creepy turn, while the missing CIA agent case is pure old fashioned greed.

LABYRINTH is a fast paced, well written thriller which held my attention and kept me reading non stop.  I truly missed the connection that Savich and Sherlock normally exhibit as they work together, but her character carried through, even with amnesia, as she remained strong and determined.  Savich showed his own character by giving Sherlock all the space she needed, but still keeping her safe.  He’s a to-die-for hero, and I love how Sherlock found him so attractive, even while not remembering him.  This latest installment to the FBI thriller series can be read as a standalone if you’ve not read the prior books.  I greatly enjoyed the read, and recommend it for fans of suspense novels.    ~Rose