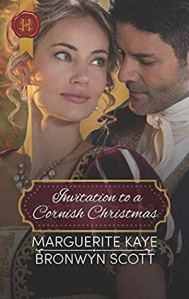 Welcome to a Regency Christmas…

…in these two festive short stories!

Captain Treeve Penhaligon must return to Cornwall when he inherits his family’s grand estate. But could his meeting with Emily Faulkner on the wild beaches be even more life changing? Find out in Marguerite Kaye’s The Captain’s Christmas Proposal. Then, discover what happens when Treeve invites composer Cador Kitto to complete the celebrations, and Cade clashes with local girl Rosenwyn Treleven in Unwrapping His Festive Temptation by Bronwyn Scott…

The last thing Captain Treeve Penhaligon expected, or wanted, was to inherit the family estate in Cornwall.  Still, duty requires that he travel to the estate to make some decisions about its, and his, future before returning back to his ship at year’s end.  He meets a lovely woman while walking on the beach, and finds that she’s actually his tenant, renting a cottage on his estate.  Emily Faulkner has retreated to Cornwall, running away from a disastrous relationship in which she was horribly betrayed.

Neither Emily nor the Captain is looking for a relationship, but they fall easily into a friendship.  Soon they have become close enough to share their histories.  Before much longer, they are sharing passionate kisses.  It’s getting harder and harder to not give in to their feelings, which have become more than just physical.  When Treeve finally declares his love, a heartbroken Emily has to reject him because she is carrying yet another secret, one more insurmountable than her unfortunate affair.

THE CAPTAIN’S CHRISTMAS PROPOSAL packs a powerful punch and a lot of emotion into a short story.  Emily is a wounded soul, definitely a sympathetic character, and it was lovely watching her come back to life under Treeve’s attentions.  I adore the Captain, who is so kind, honorable, and non-judgmental.  When all hope for their future together seems lost, his wisdom allows Emily to come to terms with what they would be facing, and the courage to make the right choice.  I applaud Marguerite Kaye’s not taking the predictable route this story could have gone, thus making the ending that much sweeter.  There is plenty of emotion and romance in this excellent, sigh-worthy story, which I heartily recommend.    ~Rose

Cador “Cade” Kitto is a former child prodigy, who has made a name for himself as a successful composer.  He left Cornwall at only eight years of age to study in London.  Now, he’s been hired to compose a Christmas Cantata back in his home town.  What everyone doesn’t realize is that Cade is not overjoyed to be back in a town that holds only painful memories of a harsh, grief filled childhood. Or that he desperately needs the income from this job.  Or, that his creativity is blocked, and he doesn’t seem to be able to compose anything worthwhile.

Rosenwyn Treleven has returned to her home town after an affair in London which has left her bruised and unwilling to trust.  When she spots the rakish Cade smiling at her sister, she’s not shy about taking him to task.  Rose has learned a bitter lesson about men, and she’d like to spare her sisters having to experience anything similar.  Rose and Cade get off to a very rocky start, with him appearing cocky while she appears hard.  Their first meetings consist of their throwing verbal darts at each other.

Somehow, miraculously, their relationship changes, and they find common ground in their shared love of music.  Rose provides the inspiration for Cade’s cantata, and he begins to write furiously.  Everyday they spend time together, growing to like each other, and feeling desire for each other.  Cade makes it clear that he will be leaving after Christmas, and Rose decides to enjoy what little time they will have together.

It’s soon clear that there is more than just lust between Rose and Cade, but he’s determined to leave and find another consignment.  Besides, he could never overcome his bitter memories of his childhood in this town, or could he?  When Rose takes a step she feels will help Cade, he becomes enraged at her interference, and it appears all is lost.  I loved the growth of these two characters, both of whom seemed a bit unlikable at first.  I quickly came to see that Cade and Rose were donning masks to hide their pain and vulnerability, and were truly loving and generous people.  It seems there really was Christmas magic abounding in UNWRAPPING HIS FESTIVE TEMPTATION, which is another beautiful and warm holiday romance that I greatly enjoyed and recommend.    ~Rose