Review – Before the Dawn by Candace Camp 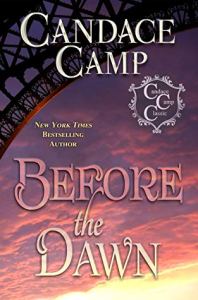 PARIS, 1940.
As the world hovered on the edge of destruction, American Alyssa Lambert found passion in the arms of a stranger. But Philippe Michaude held a dark secret that would soon tear them apart. When the Germans moved in and the City of Lights was plunged into darkness, Alyssa was forced to flee France, heartbroken at the treachery of the man she loved. Now, she has returned.

In Nazi-occupied Paris, she joins the French Resistance, transmitting coded messages to the Allies. Disguised, she must live and work in the darkest shadows of the city. But no disguise can hide her from the eyes of Philippe Michaude.

Will her love save him from the darkness or will he betray her completely?

Three women from boarding school will form a friendship that will last a lifetime, and their activities during WWII will further bond them together.  It’s been about ten years since their school days, and American Alyssa Lambert is visiting her English friend, Jessica Townsend before attending the wedding of their friend, Claire.  Jessica has been happily married for seven years to Alan, the man she’s loved since she was a young girl.  Claire’s husband-to-be is Ky, who escaped from Poland.  The war hasn’t yet come to England or France, so Alyssa travels to Paris after the wedding.

Alyssa is stunningly beautiful, which seems to affect men in one of two ways.  They are either too intimidated to even approach her, or they are so dumbstruck by her looks that they become stupid in her presence.  Philippe Michaude is extremely handsome in his own right, generally a suave and smooth man, but Alyssa’s looks seem to drive all intelligence from his body.  His clumsy attempts to push intimacy with her on their first date have Alyssa sending him on his way like a scolded puppy.  His attempts to make up for his bad behavior convince Alyssa to give him another chance.  Within a very short time, they become lovers, sharing a passion unlike either of them has known before.  It’s not too much longer before that passion develops into a deep and strong love.

The war is progressing, and the unthinkable happens – Germany has invaded France and has control of Paris.  Philippe insists that Alyssa leave the country for her own safety.  She refuses, unless Philippe will come with her.  To her utter shock, Philippe declares that he intends to stay, and furthermore, will cooperate and work with the Nazis in order to keep his business interests safe.  Alyssa is horrified that she could have been so mistaken in a person’s character, and leaves Philippe, with both of their hearts shattered.

The war escalates, with England now being regularly bombed.  Alyssa briefly went back to America, but returns to England to join Jessica and Claire to aid the Allies’ effort.  Heartbreakingly, Jessica’s husband, Alan, who became a pilot in the RAF has been shot down, is missing and presumed dead.  Alyssa has had occasion to see Philippe, looking very well off, in the company of his German friends, which feels like a knife in her still injured heart.

BEFORE THE DAWN is an amazingly well written book, interspersing the human stories that occur against the horrific backdrop of a world war.  The romance, heartbreak, espionage, deceit, secrets, and brutality all intertwine to form a story that’s compelling, breathtaking, emotional, and ultimately satisfying.  The bravery of the women, their strength in dealing with their new reality is awe inspiring, especially when you realize that these types of events really happened.  Philippe is also not just a black and white character, as things are not always as they seem.  I’m a fan of Candace Camp, but I believe this book, which was previously released under another name, is her finest work, and truly one of the best books I’ve read this year.    ~Rose