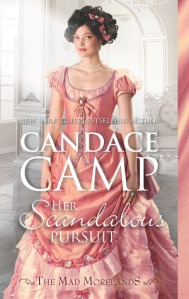 The long-awaited prequel to the Mad Morelands series—the story of Thisbe, the oldest Moreland daughter.

Thisbe Moreland is used to men not taking her seriously. As a scientist, she’s accustomed to being the only woman at lectures and meetings, her presence met with scorn and derision. So it comes as a pleasant surprise when she sits next to a handsome young man who is actually interested in having a conversation about science.

Desmond Harrison cannot believe his good fortune when he sits next to Thisbe—she’s intelligent and incredibly beautiful. He longs to see her again—but he’s ashamed of his low birth. Not to mention his employment with the infamous Professor Gordon, a formerly respected scientist who turned to spiritualism and is now deeply scorned.

When Professor Gordon demands that Desmond recover an artifact for him—an ancient object reputed to have terrible power, known as the Eye of Annie Blue—Desmond realizes that only Thisbe holds the key. Desmond must choose between his love for Thisbe and his loyalty to his mentor…but humanity’s very future will depend on his choice.

Thisbe Moreland prefers to spend her time attending scientific lectures or on her experiments rather than attending balls. She’s an intelligent woman who had the benefit of an education.  Though she’s the daughter of a duke, she prefers to be known as Miss Moreland rather than Lady Thisbe.  While attending one of her lectures, a handsome young man arrives late, and takes the available seat next to Thisbe.  They cast sneaking glances at each other, and the young man blushes and quickly glances away each time he’s caught.  When the lecture ends, and the shy young man begins to leave, Thisbe knows she’ll have to be the one to speak first.

Desmond Harrison has a passion for science and knowledge to equal Thisbe’s.  He’s a working man with a clerical job, and a second one, assisting Professor Gordon.  Desmond couldn’t help but look at the lovely lady seated next to him, but found himself unable to speak to her.  Though not extravagantly dressed, she’s clearly a lady, and out of his class.  Still, when the lecture is over, and she begins a conversation, he’s immediately at ease and comfortable with a kindred spirit.  They agree to meet again at an upcoming event.

Thisbe and Desmond continue to meet, and become closer friends, though they still hide some part of their real identities from the other.  Thisbe doesn’t confide that she’s a duke’s daughter, and Desmond hides the fact that his father is a convict who has been transported.  Ironically, Professor Gordon has taken an extreme interest in spiritualism, particularly in a mystical item called The Eye of Annie Blue.  This item is rumored to contain tremendous power, and is in the possession of none other than Thisbe’s grandmother.  Professor Gordon’s attempts to buy or borrow or study the artifact have all been refused, and he sends Desmond to scout out the Moreland mansion.  Of course he runs into Thisbe as he lurks around the house!

HER SCANDALOUS PURSUIT takes off with Thisbe and Desmond desperately falling for each other, but with many obstacles to overcome.  Their social statuses are so disparate – how could a duke’s daughter possibly make a match with a simple clerk, one who barely earns enough to support himself?  There is also the added pressure of Professor Gordon urging Desmond to use any nefarious means at his disposal to access the artifact he’s desperate to have.  Though it’s not true, will Thisbe believe that he is only using her to get to her grandmother?

There is a major paranormal element to this story, one that involves both their ancestors and the mysterious Eye of Annie Blue.  I have to admit that parts of this were genuinely creepy  –  the all too real nightmares and the evil attached to the artifact add a very dark component to the book.  The romance was sweet, strong, and genuine.  I admire Desmond’s character and his desire to be his own man.  His love and dedication to Thisbe was so strong that he would even give her up, if it meant keeping her safe.  Thisbe took a while to accept that the strange happenings were genuinely supernatural, and that everything couldn’t be explained by science.  Her love for Desmond was strong, and she was willing to risk all for the chance of a future with him.  Thisbe’s family, known as the Mad Morelands, is a collection of unusual characters, but one thing they all have in common is the wish for Thisbe’s genuine happiness, and their lack of concern for social status or society’s opinion.  HER SCANDALOUS PURSUIT actually takes place before the other Moreland books, so it very easily can be read as a standalone.  I found the romance very satisfying, and the story different and compelling.  I recommend it for fans of historical romance who enjoy the supernatural, as its presence is a major part of the story.    ~Rose

Author Candace Camp has graciously provided an autographed print copy of Her Scandalous Pursuit for this giveaway.  (U.S. only, please)  Simply leave a comment below to enter, telling me your favorite characteristic in a fictional hero.  Winner will be drawn Feb 1.  Good luck!   UPDATED 2/2/20 – Contest closed.  Congratulations to winner Joanne Doyal.