Review – For the Sake of a Scottish Rake by Anna Bradley 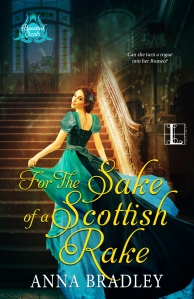 After a sheltered upbringing, Lady Lucinda Sutcliffe is finally embarking on her first season, eager to experience everything she’s missed. When Lucy realizes that her uncle plans to quickly marry her off in exchange for a slice of her fortune, she begs a favor of a new acquaintance, Ciaran Ramsey. If Lucy remains single until she turns twenty-one, she—and her money—will be out of her uncle’s power. All the charming Scot needs to do is woo her for six weeks, and then jilt her…

The Ramseys don’t need the scandal of a false engagement attached to their name. But Lucy’s older suitor is both distasteful and dangerous, and Ciaran can’t allow his lovely friend to be forced to marry such a man. And besides, the more time Ciaran spends with his new “betrothed,” the more their ruse begins to feel very much like the real thing. Passion like this is impossible to feign, but how much is a rogue willing to risk for love?

Lady Lucinda Sutcliffe has been a ward of her Uncle Jarvis since her father died.  Lucy’s life has been sheltered, to say the least, since her father kept her at home and secluded.  The death of Lucy’s mother left her father, the Earl of Bellamy, crushed, and some even say mad.  Now her uncle has taken Lucy, along with his own wife and daughter to Brighton.  Lucy hates the restrictions placed upon her, and sneaks out every day while the rest of society sleeps, to swim in the sea.  Her exhilarating frolic is interrupted when a gentleman rushes in to “save” her, believing she is drowning.

Ciaran Ramsey is just returning home from another dreary night of drinking and gambling, when he spots Lucy.  He mistakes her joyful romping for struggling, and rushes to rescue her.  After her initial resistance, Lucy realizes what’s happening, and allows Ciaran to take her to shore, letting him believe that he was a hero.  Eventually, Ciaran will come to realize that Lucy is an excellent swimmer, who plans to continue her early morning exercises.  Almost every day, Ciaran finds himself coming to the beach, where he and Lucy lie on the sand and talk about their lives and wishes.  Before long, Lucy declares Ciaran to be her best friend.

Ciaran and his family were forced to leave their home in Scotland, when an unfortunate incident ruined the family’s reputation and standing.  Ciaran had been betrothed to Isobel, who rejected him, leaving him with a broken heart.  Now, forced to live in England, and having lost his love, Ciaran spends his time listlessly drinking and wagering.  His acquaintance with Lucy is the first thing in forever that has brought him any happiness at all.  The beautiful and unusual young lady has somewhat stirred him to life again, and he values the friendship greatly.  So when Lucy no longer appears, and he finds her home vacated, Ciaran again feels lost.  He plans to go to London, hoping to find her there.

Lucy’s uncle had immediately whisked the family away to London after learning of Lucy’s early morning excursions.  He can’t afford a scandal, as he has plans of his own for Lucy and her substantial fortune.  Before Lucy comes of age in a few short weeks, Uncle Jarvis plans to marry her off to a disgusting old man three times her age, one to whom he owes a substantial debt.  Lucy soon realizes just what her uncle’s intentions are, and is determined to thwart his plans.  When she encounters Ciaran in town, she’s overjoyed to see her friend again, and asks for his help.  Will he pretend to court her?  Just for the short time until she’s in control of her own funds?

I don’t think there is any trope I love better than friends-to-lovers.  Ciaran’s and Lucy’s friendship deepens and solidifies, and their affection slowly turns to attraction, then love – though neither recognizes it for what it is at first.  They realize that they will do anything for the other.  Ciaran is even willing to marry Lucy, though she refuses, believing his heart belongs in Scotland with his former fiancée.  Ciaran was such a sad man, homesick and broken hearted, with no purpose to his life.  Despite that, he has an inner core full of honor and compassion, and I totally adore him.  Poor Lucy has been stifled, and tainted by her “mad” father, and is about to be forced into another prison, one of an unwanted marriage.  Still, she has a lovely and strong spirit, and is brave and unselfish.  FOR THE SAKE OF A SCOTTISH RAKE is a beautiful, slow developing romance between best friends, who try to outwit Lucy’s evil uncle, who has even more nefarious plans up his sleeve. I love how each of them came to realize their true feelings, and how right and perfect they are for each other.  I adored seeing Ciaran come back to life, and leave his depression and his childhood infatuation behind.  There are two other secondary romances involving Lucy’s cousin and their friend, which were also very enjoyable.  I found FOR THE SAKE OF A SCOTTISH RAKE to be a wonderful read, one that will appeal to readers who enjoy a slow building romance instead of instant lust.  Did I mention that I adore friends-to-lovers?    ~Rose