Review – A Duke by Any Other Name by Grace Burrowes 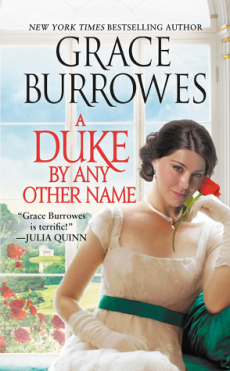 Nathaniel, Duke of Rothhaven, lives in seclusion, leaving his property only to gallop his demon-black steed across the moors by moonlight. Exasperated mamas invoke his name to frighten small children, though Nathaniel is truly a decent man—maybe too decent for his own good. That’s precisely why he must turn away the beguiling woman demanding his help.

Lady Althea Wentworth has little patience for dukes, reclusive or otherwise, but she needs Rothhaven’s backing to gain entrance into Polite Society. She’s asked him nicely, she’s called on him politely, all to no avail—until her prize hogs just happen to plunder the ducal orchard. He longs for privacy. She’s vowed to never endure another ball as a wallflower. Yet as the two grow closer, it soon becomes clear they might both be pretending to be something they’re not.

Click on title below for direct Amazon buy link:     A Duke by Any Other Name (Rogues to Riches Book 4)

I admit to being fond of curmudgeonly heroes, and Grace Burrowes has a tendency to write them very well.  As I began to delve into A DUKE BY ANY OTHER NAME, and met Nathaniel Rothmere, Duke of Rothhaven, I almost lost heart.  In previous books by this author, grumpy heroes still always exuded the utmost courtesy and behaved like gentlemen to the fair sex.  Nathaniel was downright mean, abrupt, and rude to everyone, even the heroine.  He even went so far as to make threats.  As I got further into the story, I began to see why.  Nathaniel has a secret, a very large one, one that requires he keep absolutely everyone away from his home.  Therefore, he can’t make friendships because he can never allow friends to come to call.  He has to run his household with only the few elderly remaining servants who are totally loyal to him.  He can’t have a wife, or even a casual date.  And it appears this is to be his lot in life forever.

Lady Althea Wentworth is now the sister of a duke, though her childhood was one of extreme poverty, neglect, and abuse.  Society is somewhat miffed at her brother inheriting a lofty title, but he is too powerful a man to cross.  So the cruel members of the ton show their displeasure by making life miserable for Althea instead.  After being mocked and subject to other little acts of viciousness, Althea decides to retreat to her Yorkshire estate and forego another London season.  She longs for children and a family of her own, yet she’s unable to fit in here either.  In desperation, she decides to call on the “Dread Duke,” and ask for his social advice.  When she’s turned away from his home multiple times, she takes a desperate step, guaranteed to bring the duke to her door.  Her unexpected action (involving piggies, no less) works, and a furious Rothhaven arrives in full blustery mode.

Nathaniel is amazed to find himself having tea and sandwiches with his neighbor, whom he intended to intimidate.  He does flatly refuse to spend any further time with her, though he’s touched by her need to fit in.  He certainly recognizes her loneliness, as it’s an emotion he’s very familiar with.  Realizing he needs to escape, because he’s intrigued by this unconventional woman, Nathaniel does teach her how to give the cut direct.  He wishes her well, but lets her know they won’t be meeting again.

Fate has other plans, as they do meet again.  Each meeting has their longing for the other growing stronger.  Nathaniel tells Althea there are reasons he can’t pursue a relationship, and she realizes that he’s carrying a heavy burden.  When an accident happens to a member of his household, and he’s unable to have a physician come to his home, Nathaniel is desperate enough to ask for Althea’s help.  As she stays at his home, nursing the invalid, she and Nathaniel finally give in to their passion, agreeing that it’s only a moment out of time, and can’t be anything permanent.

The secret that Nathaniel is hiding is revealed fairly early in the story, but I think it’s one the reader should discover on their own.  Many more details are fleshed out as the story progresses, showing how Nathaniel is truly in an impossible situation.  As I was reading, I was thinking – oh, boy, how is this ever going to be resolved?  It’s heartbreaking to see these two lonely people who have found genuine love, but can’t find a way to make a future together.

Nathaniel is a caring, loving, self-sacrificing man beneath the beastly persona he created, and I adore him.  Althea is capable, and a combination of strength and vulnerability, and is just what Nathaniel needs.  The resolution to Nathaniel’s situation is one that won’t be easy.  I realize that it will likely be explored further in the next book in the ROGUES TO RICHES series, and that’s one I am really, really eager to read.  Having said that, A DUKE BY ANY OTHER NAME can easily read as a standalone, and this couple does achieve their happy ever after.  The mystery part of this book was especially intriguing to me, and the details from the past were heartbreaking.  I’m happy that we’re so much more knowledgeable today about certain physical and mental illnesses, and the way we treat those afflicted.  I’m also sorry to say that bullying seems to be something that will never go away.  I highly recommend A DUKE BY ANY OTHER NAME for readers who enjoy not only a warm romance, but characters who are thoroughly fleshed out, a plot that’s unique, and situations that touch your emotions, all while entertaining you.    ~Rose