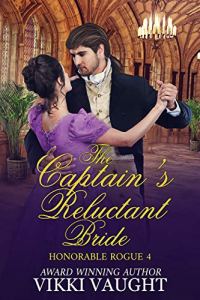 Captain John Hawks rushes to the aid of a sinking vessel. The last thing he needs is a delay that keeps him from returning to Baltimore before winter. When he finds a young woman on the foundering ship, what can he do? He never can resist a damsel in distress.

One problem should be enough, but Selena’s situation goes from perilous to deadly. Not only has she lost her parents, she’s stranded on a sinking ship, and she’s carrying the child of the vile man who betrayed her. Can she overcome so many disasters at once?

If she casts her fears aside and accepts the captain’s proposal, will it be the answer to her prayers or a curse?

Captain John Hawke is setting out from England to his home in America, where he’ll spend the winter.  Not long into his journey, he encounters a sinking vessel with a few people still on board frantically signaling him for help.  He rescues the survivors, including a young pregnant lady, whose father was washed overboard and killed.  The lady, Selena Williams, was en route to her aunt’s home in England when the disaster happened.  Though he knows he will never be able to make his journey to America, John decides to return to England and escort Selena to her destination.  When Selena’s aunt flatly refuses to shelter her, John decides to take Selena to his brother’s home with him, knowing he will offer her the family’s hospitality.  Since he’s stuck in England for the winter, he will also reside with his brother’s family, allowing him to become better acquainted with lovely Selena.

As Selena has no other options, she accepts the generosity of John’s family.  Over the winter months, the reader learns Selena’s story, and how she came to be in her current predicament.  She is slowly beginning to feel some affection for John, finding him to be a kind and honorable man.  John realizes that he’s in love, and wants to marry Selena, and raise the child as his own.  Selena, however, has a serious issue to overcome if she ever wants to have a genuine marriage.  Her previous experience with intimacy was painful, and she suffered a great betrayal of her trust.

THE CAPTAIN’S RELUCTANT BRIDE is a warm story of a young girl who has had to endure severe repercussions for a lapse in judgment.  John has an incident in his own past which weighs heavily on his soul, leading him to feel that he might make reparation for his own misdeed by being a father to Selena’s child.  The couple is very sympathetic if you make allowance for Selena’s skittishness, as she is only eighteen years old.  John’s patience and care will allow Selena to come to terms with her fears as she and John begin their life journey together.  This story will appeal to readers who enjoy strong family relationships, faith, and a slow building romance.    ~Rose