Marry in Scarlet by Anne Gracie – Excerpt and Review 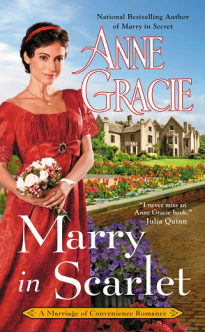 A marriage born of passion and scandal turns into something more from the bestselling author of Marry in Secret.

When a duke denied…

The proud and arrogant Duke of Everingham is determined to secure a marriage of convenience with heiress Lady Georgiana Rutherford. He’s the biggest prize on the London marriage mart, pursued by young unmarried ladies and their match-making mamas, as well as married women with a wandering eye. He can have any woman he wants. Or so he thinks…

Lady Georgiana Rutherford—irreverent and unconventional—has no plans to marry. Having grown up poor, Lady George has no intention of giving up her fortune to become dependent on the dubious and unreliable goodwill of a man. Especially a man as insufferable as the Duke of Everingham, whose kisses stirs unwelcome and unsettling emotions…

…Sparks are sure to fly

The more she defies him, the more the duke wants her, until an argument at a ball spirals into a passionate embrace. Caught in a compromising position, the duke announces their betrothal. George is furious, and when gossip claims she deliberately entrapped the duke—when she was the one who was trapped—she marches down the aisle in a scarlet wedding dress. But the unlikely bride and groom may have found love in the most improbable of places—a marriage of convenience.

Lady Georgiana Rutherford has no desire to marry. She’s about to inherit a fortune, and if she marries, it will belong to her husband. Having grown up poor, George is not going to risk that. Besides, she’s always found dogs and horses more trustworthy than men . . .
But there’s this irritating duke pursuing her. And last night at a ball he even had the temerity to kiss her . . .

Try as she might, George could not get the thought of that kiss—those kisses really, because there were at least two, and there might have been more except she wasn’t quite sure when one kiss had started and another ended. All she knew is that they were extremely . . . disconcerting.

Never in her life had her knees turned to jelly, and she didn’t trust any man who had the power to do that. To her knees or any other part of her.

She decided to ask Lily and Rose about kissing. Just in a general, nonspecific, casual way. No one must know that the duke had kissed her. If they did there would be a fuss, and she hated fusses.

She asked them after breakfast the following morning, when they were upstairs. Rose was getting ready to leave for her new home with Thomas.

“Have you ever heard of people’s knees buckling after a kiss?” George asked casually.

“George!” Rose whirled around from the mirror where she’d been tidying her hair. “You’ve finally been kissed!”

“No, it was just—I heard some girls talking and I wondered—”

“Who was it?” Lily asked. “It must have been a good kiss if your knees buckled.”

“Was it at the ball?” Rose asked. “I was so distracted by what was happening with Thomas that I didn’t notice who you were with.”

“She was with the duke for a good part of the night. Two dances and supper,” Lily said.

“No, of course he didn’t. I dislike him intensely. Why would I let him kiss me?”

But Rose took no notice. “The duke, how strange. Throughout our short courtship he only ever kissed me once, and it was as chaste as chaste can be. Nothing to turn legs wobbly.”

“He must have kissed her verrrry thoroughly if her knees went away,” Lily said, grinning.

“Stop it,” George said, flustered. “Nobody kissed me. It was just—I heard someone saying their knees buckled, as if they’d turned to jelly, and it seemed so unlikely, that’s all.”

Rose laughed. “George Rutherford, if nobody kissed you last night, explain to us now why your cheeks are on fire.”

George pressed her hands to her cheeks. They felt very hot. “All right, somebody did—but I’m not saying who, but—”

“A man with no name? Intriguing—if unbelievable.”

“But he did have a mouth.” Lily giggled. “And possibly a tongue.”

“Definitely a tongue if he turned her knees to jelly.”

“Oh, stop it. You’re both being ridiculous. I don’t want to talk about this anymore.” It had been a foolish idea to ask them about it. Both Lily and Rose were madly, giddily in love with their husbands, and of course they wanted her to be in love as well—which was never going to happen. She’d never get a sensible word out of them.

Besides, her cheeks were about to burst into flames. George turned her back on them and made a dignified exit. Or it would have been if their giggles hadn’t followed her all the way down the stairs.

Lady Georgiana Rutherford was raised in the country, without parents, and only recently learned that she has other family members.  George, as she insists on being called, has reluctantly learned how to function in society and give the appearance of being a lady. Underneath, she’s still the untamed girl who only longs to ride her horse and frolic with her dog, Finn.  Though she’s been popular with gentlemen, she’s made it clear that she has no intention of marrying.  When she receives her inheritance at age twenty five, she plans to move back to the country and set up her own household.

Redmond “Hart” Hartley, Duke Everingham, is the epitome of an aloof nobleman, well aware of his own importance.  He recently was left at the altar, when his fiancée’s supposedly dead husband returned to halt the ceremony.  Hart only felt annoyance, since it was a marriage of convenience, but he’s decided to put matrimony on the back burner.  He’s tired of debutantes being thrown in his path, schemes to entrap him, and deceitful females, like his mother, who play their little games to get his attention.

Despite his assertions, Hart’s attention is captivated by George, who doesn’t seem the least bit impressed by his person or his title.  She doesn’t care that she’s considered odd, and isn’t shy about her opinions.  On a hunch, Hart maneuvers a stolen moment with George, where he kisses her, curious to see her reaction.  He thought he sensed some sensual interest underneath her prickly exterior, and her response tells him that he was correct.  Now that he knows she’s not indifferent, Hart decides that he will marry after all.  He believes that an independent woman like George will be content to live her own life, while he continues to live his as he pleases.  They’ll occasionally meet in the bedroom to indulge in the passion that Hart senses will be very satisfying, then go on with separate lives.

Hart soon learns that George was serious about not wanting to marry, but he’s not a man to be denied.  He engineers a meeting with George, and plays on her attraction, luring her into an embrace that becomes very public very quickly.  Hart calmly announces their engagement, overriding all her denials, then blatantly publishes notice in the newspaper the very next morning.  Despite all this, George still refuses him, until yet another scheme finally causes her to give in and agree to marry him.  However, she’s going to do it on her terms, negotiating her own marriage settlement.

The first time I felt that there was some hope for the arrogant duke, was when George railed at him for his schemes and deception.  She made him see that he disdained females for their supposed games, while he was actually indulging in plotting of his own, despite what she wanted.  The moment that self realization hit Hart between the eyes, and he actually apologized is when I started to fall a little bit in love with him.  While he now feels honor bound to release George from their engagement, she feels honor bound to go ahead with the marriage.

Time after time, Hart is quick to come to judgment, thinking that George is merely playacting, only to find that she is totally true to herself and has never deceived him or portrayed herself as something she’s not.  A lifetime of walls and self preservation aren’t going to vanish instantaneously, but Hart soon opens up a little to his unconventional wife, even admitting to having some uncomfortable feelings about her.  As for George, she comes to realize that she’s fallen in love, and has no desire for the convenient marriage she originally agreed to.

MARRY IN SCARLET is a very fitting title, as George is as unique and bold as her wedding dress.  I love her honesty and her sense of honor, as well as her self acceptance.  When her feelings grew and changed, she didn’t try to hide from them, but embraced them.  Hart showed tremendous personal growth, and I particularly adored how he showed his public support for George, and eventually was brave enough to be the first to admit his love.  MARRY IN SCARLET is a warm and satisfying romance that I loved reading, and I believe will appeal to readers who enjoy strong characters and a lovely happy ever after.    ~Rose