Review – Stranger in the Lake by Kimberly Belle 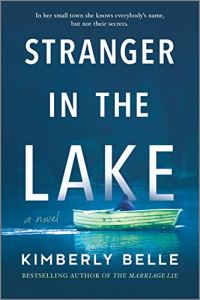 Charlotte didn’t know her greatest risk was saying, “I do.”

When Charlotte married the wealthy widower Paul, it caused a ripple of gossip in their small lakeside town. They have a charmed life together, despite the cruel whispers about her humble past and his first marriage. But everything starts to unravel when she discovers a young woman’s body floating in the exact same spot where Paul’s first wife tragically drowned.

At first, it seems like a horrific coincidence, but the stranger in the lake is no stranger. Charlotte saw Paul talking to her the day before, even though Paul tells the police he’s never met the woman. His lie exposes cracks in their fragile new marriage, cracks Charlotte is determined to keep from breaking them in two.

As Charlotte uncovers dark mysteries about the man she married, she doesn’t know what to trust—her heart, which knows Paul to be a good man, or her growing suspicion that there’s something he’s hiding in the water.

After a brutal childhood, and years of living from paycheck to paycheck, Charlotte Keller is now living the dream.  Paul Keller, millionaire, and owner of an architectural firm was smitten with Charlotte from the moment he saw her at her job as a cashier.  He kept buying items, paying for them one at a time, just so he could continue to talk to her.  After being a couple for less than a year, the girl from the wrong side of the tracks and the wealthy socialite marry.  They are passionately in love and very happy.  Well, except for his mother.  And except for the fact that her old friends no longer speak to her, believing she just married for money.  And except for the fact that she’s now pregnant with an unplanned baby…

Paul is over a decade older than Charlotte, and a widower.  His first wife, Katherine, whom he was madly in love with, died tragically in a swimming accident four years ago.  Meeting Charlotte has brought Paul back to life, and much to her delight and relief, he’s ecstatic about the upcoming baby.  Then another woman is found dead in the lake, in the same spot where Katherine’s body was found.  There were whispers when Katherine died that Paul was responsible, but it was ruled accidental.  Two bodies found in the same place seems a bit hard to believe.  As the police investigate, Paul tells them that he never saw this woman before.  Yet, Charlotte saw him talking to her in town just yesterday.  When Charlotte questions him, Paul puts her off, promising an explanation later, and disappears for a couple of days.

As the story unfolds, it’s told from two viewpoints – the present and twenty years ago.  Back then, a teenaged Paul, along with his two best friends, Micah and Jax, embarked on what was to be a night of innocent fun and drinking.  As often happens, things got off track, and a tragedy occurred, one which has ties to the latest dead woman found in the lake.  One night of careless behavior leads to decades of far reaching consequences which not only involve the three boys, but an ever expanding web of victims and conspirators.

STRANGER IN THE LAKE is an intriguing and compelling read.  I was hooked into the mystery right from the beginning, not able to stop reading until I had completed the book.   Charlotte’s background has helped her to be a strong person, and a likeable and sympathetic heroine.  I admire her ability to analyze and admit her mistakes, and to determinedly move forward from adversity.  Paul is a combination of being a kind, loving man, but one who is somewhat weak in many ways.  His intelligence in matters of business is not matched by some poor life decisions he made, greatly affecting his and Charlotte’s future.  There are obvious suspects, but just as I thought I started to figure things out, there was another twist.  The reality of what happened is truly a sad story, one that involves recklessness, betrayal, cover-ups, lies, deception, and, of course, murder.  This well written page turner held me captive as I furiously zipped through the pages to discover the fate of those three boys today, and whether Charlotte’s and Paul’s marriage was able to withstand the impact of truth revealed.    ~Rose