Blog Tour – A Dash of Romance by Paullett Golden – Review, Excerpt, and Giveaway

With quills and fantasies, they write their future.

​Percival Randall lives an uncomplicated life of luxury, as he likes it. Not even an ultimatum requiring marriage can tip the scales. A conniving young lady who compromises his name to force a betrothal, however, is an impediment to happiness Percival must confront.

​Abigail Walsley dreams of publishing novels rather than marrying dashing heroes. An unexpected proposal and a subsequent Banbury tale tumble her into a betrothal with a man she has never met. Following her dreams proves a challenge with a marriage of inconvenience on the horizon.

This is the love story of Percival and Abigail, two dreamers who write their love story one scene at a time.

​From second chance romances to mistaken identities, experience A Dash of Romance in this collection of one short novel and fourteen bonus flash fiction pieces.

“Honored guests of The Tangled Fleece,” Mr. Randall said, his words enunciated, his voice loud and clear. “I have read the sage advice of Mr. Stitch from Sidvale’s prestigious newspaper, and I have taken his words to heart. Mr. Stitch is a wise man, far wiser than myself.”

The crowd mumbled, a hushed buzz circling the room. Abbie sank lower into her chair.

“Although Mr. Stitch’s words were for Miss Lucy, I must heed his advice if I am to prove my affections for a certain young lady who has stolen my heart. I stand before you today, a man struck by Cupid’s arrow. From the moment I first laid eyes on Miss Abigail Walsley, I knew myself affected. There is no cleverer or enchanting woman of my acquaintance. Would my betrothed please join me?”

Heads swiveled. Abbie sank until only her eyes peered over the table.

She ducked under the table. Boot heels against wood clopped their way to her, louder as they approached until she could see the black sheen. A hand reached beneath the table, palm up. When the floor did not open and swallow her, she heaved a sigh and took his hand. Hoisted to her feet, her first sight was the dimpled smile and hazel eyes of her counterfeit intended. Her heart flip-flopped.

Turning her to face the onlookers, he laced their fingers. “My love for the vicar’s daughter runs so deeply that nothing could tear us asunder.” He gazed down at her, his expression full of doe-eyed, fake love. “My only hope is that we will share the same taste in curtains, for if anything could fell our affection, it would be pink, lacy curtains.”

The crowd erupted in laughter, a few of the patrons sighing with contentment.

If it was the last thing she did, she would bury him in the flower garden.

Abigail Walsley, at the advanced age of twenty-four, has long since given up thoughts of marriage.  She fills her time with helping her father, the vicar, writing her novel, and visiting with the lonely Lady Dunley.  Lately, the viscountess has become more and more insistent that Abbie leave her home and come stay with her as a full time companion.  When Abbie continues to refuse, Lady Dunley orders her son to come and propose marriage.  The viscount is even more stubborn than his mother, refusing to accept her refusal.  In desperation, Abbie blurts out that she’s already engaged.  Dunley demands more information, and Abbie creates a fictitious fiancé modeled after the hero in her novel.  That’s harmless enough – once the viscount finds another bride, Abbie will quietly become unengaged.  Only, the viscount is not letting things end there.

Percival Randall is the second son of an earl.  He’s a charming man about town, but leading a shallow life with no vocation or genuine purpose.  He’s currently trying to avoid selecting a bride, as his father is exerting pressure on him to settle down and start his own family.  He receives a letter from Viscount Dunley, informing him that he’s aware of his engagement to a certain Miss Abigail Walsley, and a demand that he end it.  It’s only Dunley’s erroneous train of thought that led him to conclude that Percy is the mysterious fiancé, but the rumor mill never stops, and soon everyone, it seems, is congratulating Percy on his engagement.  When his father sends his happy felicitations, Percy knows it’s time to find this mysterious Miss Walsley before he finds himself a married man.

Percy expects to find a scheming, beautiful, seductress, one intent on becoming attached to his respected family name by any means.  He doesn’t expect to find a plainly dressed, ordinary vicar’s daughter.  As Percy confronts her, and finds out the truth of the situation, they agree to work together temporarily in order than neither of their reputations will suffer when their sham engagement ends.  At first, Percy is bored to tears with life in the small village, but he soon becomes involved with Abbie’s literary society, and other events in her day to day life.  Surprisingly, he even becomes fast friends with the vicar.  Percy develops an interest in the town’s industry, small though it is, and even finds a vacant manor that calls to him.  Through all this, he comes to see Abbie through the eyes of love, and wants to make their engagement real, but she can’t believe he’s sincere, or will change from the town-loving society man.

A DASH OF ROMANCE is a pure delight to read!  Percy is the physical embodiment of her fictional hero, so Abbie is quite taken with his looks, which he is not shy about using to his advantage.  But it’s his metamorphosis from a somewhat shallow, albeit charming, rogue to a man with goals and a purpose that is so breathtaking.  He hides his own self doubts and vulnerability beneath his sunny exterior, as he works to find a way to have the future with Abbie he so desires.  Abbie can’t accept that an ordinary woman like her could possibly secure the love and devotion of a man so opposite herself.  But, as they say, opposites attract, and Abbie and Percy have an attraction that goes beyond the physical.  They just fit as a couple, each complementing the other.  They have a genuine joy being with each other, and have fun!  A DASH OF ROMANCE is such a pleasure to read.  I recommend it for readers who enjoy a light read, but also one that is full of heart and wonderful characters, and will leave you with a smile.    ~Rose

P.S. In addition to this story, there is a collection of fourteen more “shorts” for your reading pleasure in this book.  Each new story has a lovely black and white sketch at the beginning.

July 13-21 – Prizes: autographed book of choice from any book in The Enchantresses series; autographed A Dash of Romance 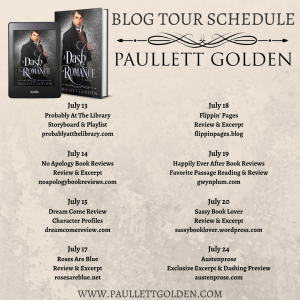