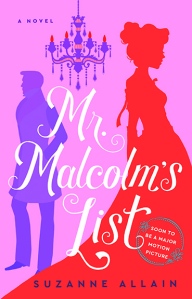 It is a truth universally acknowledged that an arrogant bachelor insistent on a wife who meets the strictest of requirements–deserves his comeuppance.

The Honorable Jeremy Malcolm is searching for a wife, but not just any wife. He’s determined to elude the fortune hunters and find a near-perfect woman, one who will meet the qualifications on his well-crafted list. But after years of searching, he’s beginning to despair of finding this paragon. And then Selina Dalton arrives in town…

Selina, a vicar’s daughter of limited means and a stranger to high society, is thrilled when her friend Julia invites her to London.  Until she learns it’s part of a plot to exact revenge on Mr. Malcolm. Selina is reluctant to participate in Julia’s scheme, especially after meeting the irresistible Mr. Malcolm, who seems very different from the arrogant scoundrel of Julia’s description.

But when Mr. Malcolm begins judging Selina against his unattainable standards, Selina decides that she has qualifications of her own. And if he is to meet them he must reveal the real man behind…Mr. Malcolm’s List.

Despite being only the second son of an earl, Jeremy Malcolm is a highly sought after matrimonial prize.  His good looks, wealth, and property have many young ladies eager to attract his interest.  One of those young ladies, Julia, is humiliated that after one outing, Jeremy failed to call again.  Since her cousin, Lord Cassidy, known as Cassie, is Jeremy’s best friend, Julia hounds him to find out what she did wrong to lose Jeremy’s favor.  It seems that Mr. Malcolm has a list of matrimonial requirements, and Julia did not make the cut.  Upon learning this, Julia comes up with a plot of revenge, one that involves an old school friend.

Selina Dalton is surprised and pleased to receive an invitation to visit from Julia, as she is at loose ends after her last employment ended.  Selina is the daughter of a vicar, and spent three years as the companion to Mrs. Ossory, who recently passed away.  The opportunity to visit London and have a small taste of society is appealing, as Selina has never had an official season.  When Selina learns that her visit is contingent upon her going along with Julia’s scheme, she reluctantly agrees.  She’s sure that a man as calculated and fastidious as Mr. Malcolm will never show any interest in her anyway.  Yet, Julia plans to coach Selina into meeting all of the requirements on Mr. Malcolm’s list, and then when he is well and truly caught, to have Selina reject him.

Selina and Jeremy have an initial meeting, with neither knowing the other’s identity, and they both have their interest piqued.  It seems that Selina is unintentionally fulfilling all of Mr. Malcolm’s requirements, while she finds him totally unlike the arrogant man Julia portrayed him to be.  The more time they spend together, it seems that they are a perfect match.  Selina time and time again tries to tell Julia that she won’t be part of her scheme, but Julia won’t be swayed from her course.  When Mr. Malcolm plans a houseparty, Julia feels sure that she will finally have her sweet revenge.

The party at Jeremy’s estate consists of Selina and her parents, Julia and her mother, Cassie, Henry (another potential suitor) and Jeremy and his mother.  It’s safe to say that chaos ensues, as there are engagements, broken engagements, fake engagements, misunderstandings, abductions, plotting, scheming, and some decidedly waterlogged moments.  Jeremy may have been a touch arrogant in his manner of seeking a bride, but he’s a genuinely good man, who was only seeking a lifelong companion he could be happy with.  Selina is perfect for him, an intelligent lady with a sense of fun and humor.  I genuinely wanted them to be together, though the havoc that ensues makes it look very doubtful.  I have to classify MR. MALCOLM’S LIST as a charming and delightful romp.  It’s truly a read that left me feeling good and smiling.  The writing is so well done, that I was visualizing the scenes in my mind, always a signal to me that I’m really enjoying a book.  I recommend MR. MALCOLM’S LIST for historical romance readers who love a light, warm, and engaging read.    ~Rose